NYC Detective among 11 motorcyclists indicted in attack captured on video. 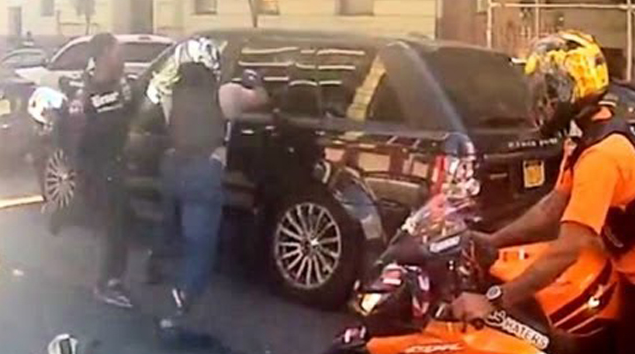 A New York City Grand Jury has indicted 11 of the motorcycle gang that participated in the attack upon the Range Rover being driven by Alexian Lien, and also occupied by his wife and child.  (I previously covered this incident over at the my Law of Self Defense blog:  VIDEO: Range Rover Deliberately Runs Over Motorcyclists–Justifiable Self-Defense?)

The ~5 minute video embedded below starts about 1 minute before the first serious interaction between Range Rover, driven by Alexian Lien, and the motorcyclists, and ends in the moments before Lien is physically hauled from his vehicle by multiple assailants and badly beaten.

If you’re not familiar with it, you might take a moment to view at least the first and last minutes of the video, as those are the portions of relevance to this post:

Among those indicted is a New York City Police Detective, Wojciech Braszczok, who was personally charged with gang assault, criminal mischief, riot, and other counts. Prosecutors claim Braszczok took part in the attack by shattering the Range Rover’s rear window. He was off-duty at the time of the attack.

Alexian Lien, the driver of the Range Rover, has not been charged with any crime.

Excellent.
The cop seems not to have had an effective excuse, at least not so far.

Stealing from a previous Branca article – answer the following about this circumstance:

There are a couple of points to think about:
Make sure when you stop your vehicle, you can see where the tires on the vehicle in front of you meet the pavement. If you do this, you can turn your vehicle to the side and pass if the vehicle in front does not move. If cornered, consider fleeing on the sidewalk or forcing between other vehicles. Though not apparent in this video, driving straight backwards may have been an option. Likewise, make sure your doors are locked. It did not help when the side window was bashed out, but earlier in the video, it was a problem.

I’m confused. I don’t seem to be able to figure out what actually started this, resulting in making Mr. Lien think he had to do whatever necessary to get away. Were the multiple bikers on the road around the vehicle just looking scary to him because they were a group of bikers and he just didn’t like that, or were they deliberately harassing him (if so why?, or were they threatening him (and if so, why?)

Look at the video at about the 25-27 second point. A motorcyclist moves in front of the car and slows down while looking backwards. Appeared deliberate to me. When the car bumped the cycle, there was a brief pause while men came off their bikes and the car drove over at least one bike (not a person) to get out of there (about 55 second point in video).

I read one article a couple weeks ago that stated these same bikers had had contact with the law a couple of hours earlier in connection with another accident. There is a suspicion that the bikers were setting up drivers for insurance scams.

Thanks, appreciated. I suppose we’ll hear from defense lawyers some rationale for what the bikers thought they were doing.

So I went looking for more information, because admittedly, I haven’t been following this, and I found an interesting interview with Piers Morgan and Gloria Allred who somehow has injected herself into this. Allred is claiming to the effect that the bikers were trying to stop the SUV driver because he already had done one or more hit and runs on the bikers (unclear).

Piers Morgan was defending the driver’s driving over the biker who was then on foot and in front of the SUV, saying he would be scared, etc.

I wonder whether Morgan would be defending the driver had the driver pulled out a firearm instead of using his SUV as the lethal weapon.

These crotch rocket ‘gangs’ are notorious across the North East and California for deliberately stopping traffic on interstates and other highways in order for some of them to perform ‘road stunts’. These include but are not limited to: wheelies, races and circus type acrobatics. They then post their videos on You Tube, as the miscreant who video taped this incident did.
Apparently the good doctor got past the line of bikes that construct the road blocks, thus the need to ‘brake check’ him at the beginning of the video. Unfortunately, he didn’t see the biker in time so hit him, breaking his leg. This caused the doctor to stop while his wife called 911. However, because the bikers started beating on his SUV, knifing his tires and other aggressive moves, the doctor and his wife felt it was in their best interests to flee the scene while still able to.
There was a total of 4 911 calls previous to the final altercation. All of them from the doctor or his wife. Perhaps the bikers were too busy pursuing the good doctor to call for assistance for their injured compatriots.

Source for the number/source of 911 calls?

“Ng placed four calls from inside the Range Rover in a span of nine minutes, ending as ambulances and police finally arrived at the site where Lien was assaulted by motorcyclists. Police received other 911 calls about the incident as well, but would not say who made the calls. ”

the usual caveats about the news as a source…..

Good! It’s about time these pack animals were served justice.

This is the hallmark of today’s predator-thug: to film a crime with your helmet cam. Terrifying and brutal.

A number of years ago I was offered (and later accepted) a job on the south side of Chicago. Before I accepted, I called the beat commander of the precinct where I would be working and asked whether, as a 5-foot tall, blonde, white woman, I would have a target painted on my back. At the time, there was a problem with “smash-and-grab” of purses. The officer (not the beat commander) with whom I spoke advised me to keep the purse on the floor, the cell phone (my first one) near me, to always leave an out at a traffic light, and if necessary to “feel free to drive right over someone to get out of there” in the event of a problem. I remember his words to this day and should I ever, Heaven forbid, be in a similar situation, I would do as he instructed and simply say “Officer Fratto told me to do it.” Lien didn’t do anything wrong.

We’re living in a truly sick society. My fear is that a DiBlasio NYC will let these thugs off the hook.

Range rover driver vs bikie gang – it is all over red rover.

It’s been a while since I looked at the criminal law, but I do remember that in New York State, it’s a higher grade of crime (or lower, in a sense) to commit homicide when the victim is a police officer (and a few other classes or honorary victims), as against your average victim (if I remember right, it’s deemed Murder in the 1st Degree v. merely 2nd.) If that’s regarded as fair & just, then shouldn’t cops get a more severe crime classification and sentence when they commit a violent crimes against innocent citizens?

It’s been a long time since I practiced law in NY, but back then Murder 1 effectively didn’t exit, although it was on the books, because it was the state’s capital murder statute, and the NY Court of Appeals (oddly, their state Supreme Court) deemed that statute unconstitutional under the NYS constitution.

That said, police officers routinely DO face more severe punishments and even additional charges than do non-LEOs. Not for the reasons you suggest–tit-for-tat–but because they are acting under color of law, and are therefore held to a higher standard.

The details are too complex to get into in a blog post. Law school beckons! 🙂

Having no edit function sucks–to clarify the above post, the experience I cite above is based on my time as an investigator with the Broome County (in NY) public defender’s office, and working closely on violent crime cases, back when I was a young man. That, however, was before I went to law school. I’ve never actually “practiced law” in New York state. By the time I was admitted to the bar I’d already moved out of state. I’ve only ever practiced law in the Commonwealth of Massachusetts.

“That said, police officers routinely DO face more severe punishments and even additional charges than do non-LEOs. Not for the reasons you suggest–tit-for-tat–but because they are acting under color of law, and are therefore held to a higher standard.”

Can you cite a few examples of any such punishments?

I watched some of the other videos posted by one of the people posting this. It’s clear that these motorcycle riders are a$$holes, they act much like the bicycle riders in SanFran by harassing car drivers, vandalizing vehicles, disobeying traffic laws, engaging in dangerous maneuvers in traffic and even assault.

I have no specific knowledge of NY State law, but IMO that deliberate ‘brake checking’ is a form of aggression, and also reckless behavior. It is beyond mere negligence. Whoever engages in that sort of behavior must bear culpability for what follows.

I am so, so happy to see these motorcyclist/thugs arrested.
I myself am an avid motorcyclist, and these criminals give us all a bad name.