Obama admin leaks about Israel because it can. 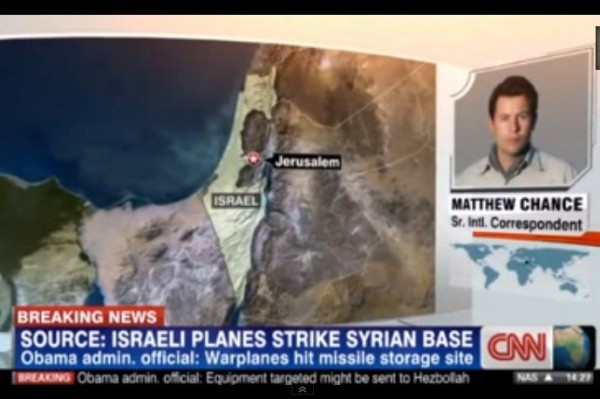 Earlier this week three were unconfirmed reports of a very large explosion near the Syrian city of Latakia.

As in all these cases, Israeli officials were silent as to whodunit.  That’s the dance that takes place to avoid a major war.

Israel destroys game-changing weapons on their way to Hezbollah, Syria pretends it’s not sure what happened, and everyone goes along with a major confrontation.  So long as Israel doesn’t try to shift the balance of power within Syria and focuses on weapons headed to Hezbollah, Assad is under limited pressure to react.

But not for the first time anonymous U.S. officials have told multiple U.S. media outlets that Israel was behind it.

Which raises the question, why the leaks?

Israel’s Channel 10 TV on Friday night quoted Israeli officials branding the American leak as “scandalous.” For Israel’s ally to be acting in this way was “unthinkable,” the officials were quoted as saying.

A second TV report, on Israel’s Channel 2, said the leak “came directly from the White House,” and noted that “this is not the first time” that the Administration has compromised Israel by leaking information on such Israeli Air Force raids on Syrian targets.

What are you going to do about it?

Like the rest of us, lean forward for 3 more years.

Why, oh, why, does anybody still trust Turd Boy!!?? Israel should keep things close to their vest and not let the US in on anything. Obama HATES US and especially Israel. It’s important to remember that.

They did, but the NSA was listening

Roger Simon was writing today about Obama practicing an America taqueria of sorts – he lies to advance his political position.

I strongly suspect that he is actually practicing taqueria of the Islamic variety.

It would explain an awful lot of what we see right now coming from him.

A bit of advice for Israel.
First round up the US spies and trade them for Pollard.
Second, don’t tell us anything.
Third, inform the US Ambassador that Jerusalem is the capitol of Israel and that only Embassies and Ambassadors based in Jerusalem will be recognized and receive all traditional Diplomatic benefits. Those based outside Jerusalem will lose Diplomatic Immunity and be deported.

Hey, nobody is stopping Israel from doing that. And they are by inches every day as they suffocate east Jerusalem. Here’s my question: Why does this matter to an American?

Also, the answer to your little riddle is that only 5 nations, and only one major nation would honor Jerusalem as Israel’s capitol – or are you so ignorant of the larger world that you don’t realize that most of the world considers Israel’s radical Zionism a moral stain on the Jewish people? I guess not…

I’m quite well aware that many Europeans are saddened at Hitler’s failure. I’m also aware that most of the world “leaders” are scared of the Islamist terrorists that back “Palestine”.
What “riddle” are you talking about? I really don’t care if the anti-Semites in the EU and UN don’t want to recognize a country that has as much right to exist as France.

Obama is trying to regain street cred with his fellow Muslims. The best way to do that is to screw Israel. Netanyahu better stop listening to Obama.

I used to think our mistake was to put a fox,(Obama), in the hen house. It’s worse than that! W have a rat in the White House.

‘Barack Obama’ (or whoever he actually is) is a traitor to America and the rest of the free world. Why Israel get a pass from this malignant cretin?

It is more of Obama’s affirmative action in favor of Muslims who hate America.

The Obama administration routinely comes down like the wrath of an angry Cthulhu on leakers. No way in HELL does this happen without Obama’s approval.

Israel would do better to write off America as an ally, as long as Obama is President.