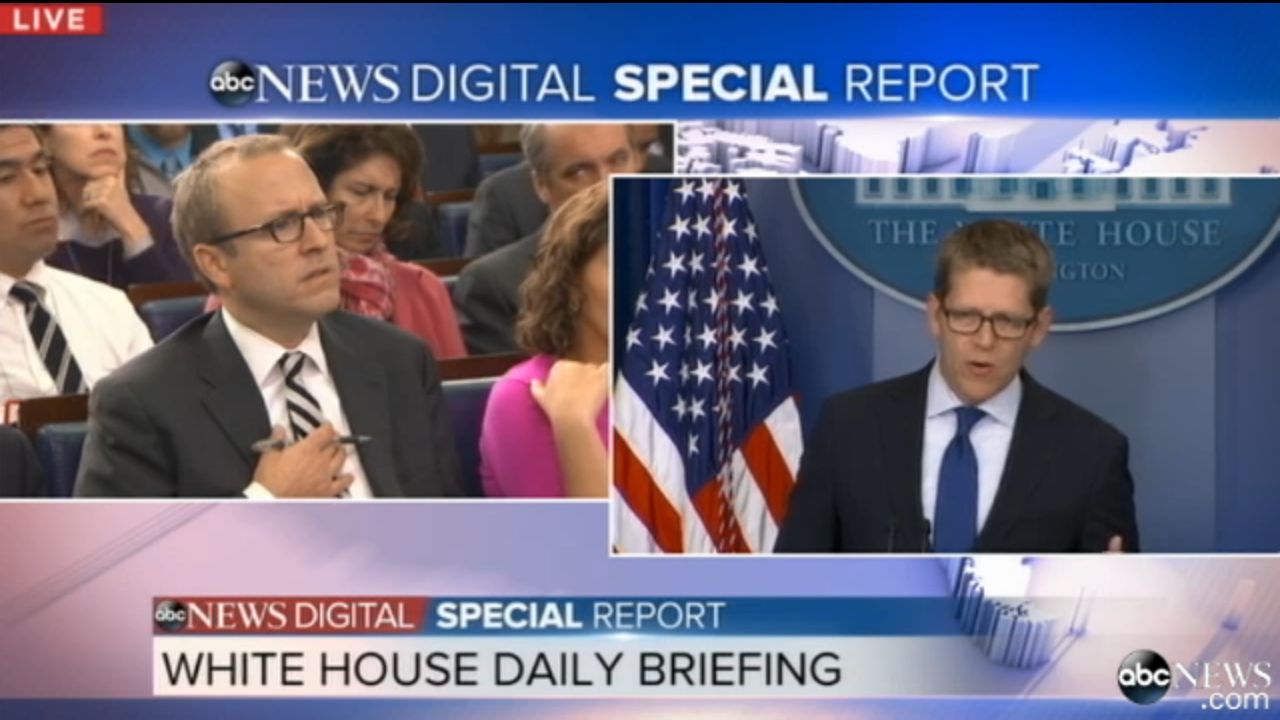 Since problems first impacted the troubled healthcare.gov website, officials have repeatedly told frustrated consumers that they may turn instead to alternative enrollment options, such as paper and phone applications.  But even those applications must rely on the same portal to determine eligibility, according to ABC News, which sparked an interesting exchange today between WH press secretary Jay Carney and an ABC News correspondent.

A series of internal Obama administration memos obtained exclusively by ABC News reveal for the first time how dysfunction with HealthCare.gov has upended the entire Affordable Care Act enrollment process, including applications by paper and phone that officials have been pushing as more reliable alternatives.

While President Obama and other top aides have publicly reassured frustrated consumers that they can bypass the troubled website and apply by phone in as little as 25 minutes, those working most closely with the rollout acknowledged privately that even the nonelectronic avenues would be no more efficient or guaranteed, the documents show.

“The same portal is used to determine eligibility no matter how the application is submitted (paper, online),” reads a Center for Consumer Information and Insurance Oversight memo from Oct. 11.

“The paper applications allow people to feel like they are moving forward in the process and provides another option,” it says. “At the end of the day, we are all stuck in the same queue.”

In response to the report, HHS spokeswoman Joanne Peters said, “We have been clear for weeks now that processing paper applications uses HealthCare.gov — but bypasses the front-end portal involving creating an account. In addition, we are checking items off our punch list every day and believe that by the end of November the system will work smoothly for the vast majority of users. We are processing paper applications every day, and consumers are receiving eligibility determinations from these applications.”

Indeed, it’s not necessarily new information, as we’ve also heard in recent post-launch testimony before Congress that this is the case. But one thing that has seemed unclear is at what point those who do use the alternate methods actually end up enrolled.

Karl starts out by asking, “Did the president know that the very same problems would be facing consumers when they called on the phone when he said that they could apply in 25 minutes?”

But through some back and forth with Carney about the claim, it becomes clear that what’s at issue here is not so much the word “apply,” but actually the word “enroll.”

After being mocked by Carney for pressing the issue – Carney calls the questioning a “soliloquy” – Karl eventually makes the point very clear.  He references an October 24th quote from HHS Secretary Kathleen Sebelius: “A person on the other end of the phone can get questions answered in up to 150 languages as well as walk somebody all the way through the process and enroll at the end of the day.”

Karl follows up with the question, “She says you can enroll at the end of the day, is that right?” [followed by cross-talk]

Carney ends with, “Jon, everybody else here understands what I’m saying, I’m sorry I can’t say the same for you.”  And he then moves on to the next question.

To be fair, I understand that Carney is explaining that by saving the consumer the trouble of having to deal with the account creation process on the front-end, it was removing an element of frustration and shifting the remaining burden to the representatives and navigators instead.

But at the end of the day, I still don’t think it’s very clear as to when a consumer is actually enrolled in a plan when they apply by phone or paper application. And when a deadline is ticking away for uninsured consumers to enroll, I think that’s important information to know.

Some days, I almost feel sorry for Jay Carney. Being Obama’s official shill is such a thankless job. I’m surprised he hasn’t quit in disgust at all the ridiculous things Obama has him say.

He would need to have pride and integrity, values that he gave up long, long ago.

Carney better get used to feeling this way.

It’s only going to get worse from here.

Telephone, paper applications are just a cheap trick to buy time. They need time to get on their knees and pray for a miracle.
Or maybe not. Maybe what they need is a little bit more time to make sure there’s no turning back.

Really … is there any difference?

One had a more impressive uniform.

…*and* that really cool beret.

I pick lizard. Lizard poisons Spock, who is, as we all know, the smartest, coolest man in the universe and therefore stands in for Obama.

That animation from Andrew Stiles of…

Is there any truth to the rumor that Jay Carney is Ed Norton/Art Carney’s grandson?

Norton did work in the sewer. Carney is following in Norton’s footsteps.

“To be fair, I understand that Carney…”

Are you kidding? “To be fair”?

Why do they continue to lie, lie and lie?

Trey Gowdy: Mailed In, Phoned In Applications “a Facade, a Potemkin Village Calculated To Mislead Folks” | Nice Deb | November 5, 2013 at 12:37 am

[…] performance today at the White House press briefing has been characterized as a “Meltdown“, “losing it”, “over-the-top”,  ”flustered”, […]

Carney must have the highest-stress job in the history of the world. Here he is,tasked with trying with all his might all the time to make the very worst president of the US EVER’s actions look reasonable,fair and wise when they are actually crazy,enormously unjust, or plain stupid. I usually am cold hearted towards Democrats and Leftists/Communists,but I actually pity Carney, the same way I pity my ex husband. Both are in terrible positions due to the poor choices they made in life.

HHS spokeswoman Joanne Peters said in part, “by the end of November the system will work smoothly for the vast majority of users.”

How definite and exacting a term is ‘everybody’ or ‘nobody’. How malleable and easily spun is the new prediction “vast majority”. Why, one could quibble away entire news cycles arguing whether 50.1% constitutes a “vast majority”.

As for Jay Carney, he has become his name, a carnival barker, a ‘carny’.

Is it just me, or do others have the urge to slap the smarmy grin off of Carney’s face?

You’re not the only one