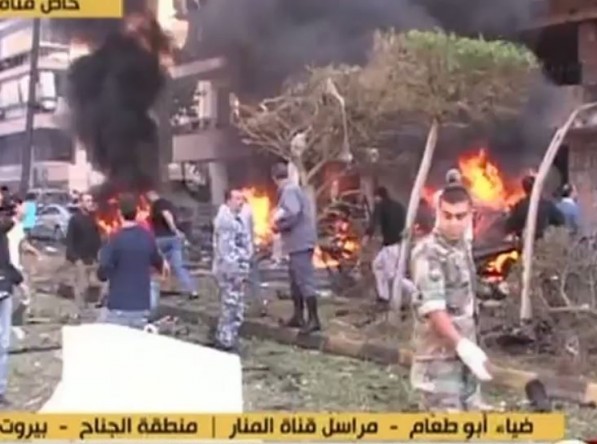 There was a double suicide bombing targeting the Iranian Embassy in Beirut earlier today.

There are at least 25 dead, including one diplomat.

An al-Qaeda linked group is claiming credit, but the Iranians are blaming Israel.

The bobming is assumed to be in retaliation for Iran’s involvement in Syria, including training, advisors, equipment and other support. there have been prior car bombings directed at Hezbollah in retaliation for its intervention, with Iranian support, in Syria.

The Daily Star of Lebanon notes:

Lebanon, polarized over the war in Syria, has seen a string of deadly car bombings in recent months, all widely linked to crisis in its war-torn neighbor.

On two separate occasions, car bombs have targeted the southern suburbs of Beirut, a stronghold of Iranian-backed Hezbollah which in May acknowledged it was fighting in Syria alongside forces loyal to President Bashar Assad against rebel groups.

Hezbollah chief Sayyed Hasan Nasrallah has accused jihadists of being behind the bombings in the southern suburbs and vowed to continue the military campaign in Syria as long as necessary.

Oh good . Iran might nuke Sunnis & do us all a favour.

They are more likely to nuke the Israeli – hence blaming Israel for this attack.

Obama will panic. They are not killing Americans / Israelis.

If Lebanon turns into a VERY ACTIVE snake pit of warring chieftains… expect Obama to begin shipping weapons to the ‘most hostile to the US / Israel’ faction.

You know, I was looking for something negative in this posting and I just can’t find it. I won’t be passing out sweets to my neighbors, like the Palestinians did after 9/11, but I did scratch my buttocks and yawn.

Islam certainly is a religion of pieces. Inshallah (bastards)

But then again….what difference does it make???

Why not? The whole world has realized what a lox the current American president actually is.

It is still surreal that (1) the hoax of ‘Barack Hussein Obama’ has been perpetrated to the extent it was, and (2) millions of Americans are still falling for it.