Hypocrisy from the NY Times on filibusters

Hypocrisy from the NY Times on filibusters 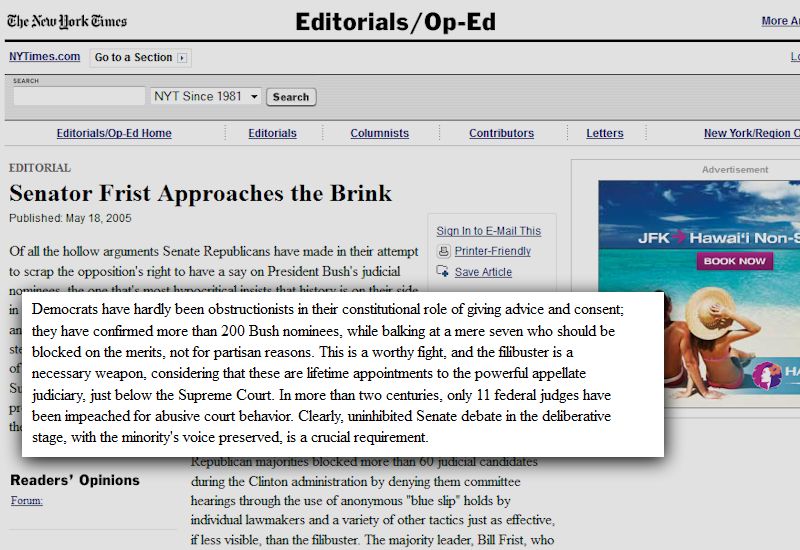 It turns out that after the recent news that Democrats went the nuclear option route on the judicial filibuster, the hypocrisy isn’t limited to politicians.

Patterico dug up some interesting snippets yesterday from the NY Times (though at the time of this writing, the wording was a bit confusing, but I think you’ll get the point).

The New York Times editorial board today, November 21, 2013, editorializing in favor of the judicial filibuster, at a time when we have a Democratic President and Senate majority:

For five years, Senate Republicans have refused to allow confirmation votes on dozens of perfectly qualified candidates nominated by President Obama for government positions. They tried to nullify entire federal agencies by denying them leaders. They abused Senate rules past the point of tolerance or responsibility. And so they were left enraged and threatening revenge on Thursday when a majority did the only logical thing and stripped away their power to block the president’s nominees.

In a 52-to-48 vote that substantially altered the balance of power in Washington, the Senate changed its most infuriating rule and effectively ended the filibuster on executive and judicial appointments. From now on, if any senator tries to filibuster a presidential nominee, that filibuster can be stopped with a simple majority, not the 60-vote requirement of the past. That means a return to the democratic process of giving nominees an up-or-down vote, allowing them to be either confirmed or rejected by a simple majority.

Republicans warned that the rule change could haunt the Democrats if they lose the White House and the Senate. But the Constitution gives presidents the right to nominate top officials in their administration and name judges, and says nothing about the ability of a Senate minority to stop them. (The practice barely existed before the 1970s.)

Thank God we have a “return to the democratic process of giving nominees an up-or-down vote.” After all, the filibuster barely existed before the 1970s, meaning history is on the Democrats’ side in demanding an up-or-down vote!

You know what’s coming, don’t you? Of course you do.

Now go read it at Patterico’s blog to see what the NY Times wrote in 2005.  Spoiler alert: they felt quite differently.

Yesterday I was mildly optimistic.

Then I realized that many, many Senate republicans play for the other team in the continuous struggle of the Government Class vs. the Country Class.

Reid burned the rule book. Rather than giving us a chance to unscrew the pregnant woman, what he’s really done is take every Congressional republican off the hook for the next two years.

Nobody’s going to be held accountable for at least two years; in some cases, eight.