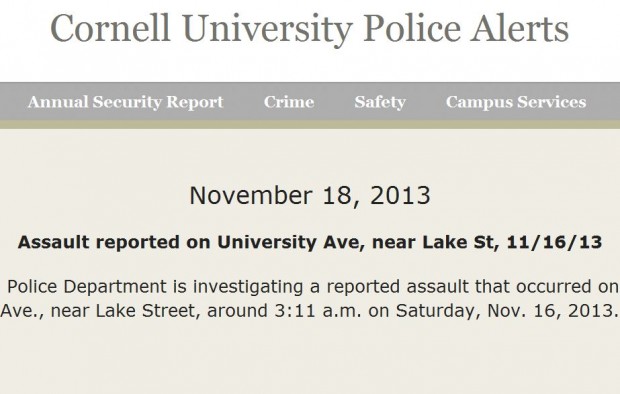 The so-called knockout game is receiving a lot of media attention.

It’s hard to know if it is escalating in frequency, or just getting more media coverage:

An incident on November 16, 2013 at the edge of the Cornell University campus in Ithaca, NY, appears to fit this pattern of an unprovoked, seemingly random sucker punch to the face of a stranger without any apparent robbery or other motive (emphasis added):

November 18, 2013
Assault reported on University Ave, near Lake St, 11/16/13
The Ithaca Police Department is investigating a reported assault that occurred on

According to the male victim, he and a friend were walking on University Ave., near Lake Street, when they were approached by two males. The victim reports that the two males did not say anything, but one of the males punched the victim in the face with a closed fist causing pain and physical injury. The victim describes the perpetrators as a tall black male wearing dark clothing and a shorter Hispanic male also wearing dark clothing. The perpetrators then fled the area in a southerly direction on University Ave. The extent of the injury to the victim was not immediately apparent at the time of the incident and has been upgraded to an Assault.

A spokesman for the Ithaca Police Department indicated that the investigation has developed “no information to confirm or deny” whether the incident was part of a knockout game, and that they still were “trying to develop” information as to motive.  The police are using social media and confidential informants to determine motive, but have no evidence one way or the other so far.

As far as the officer was aware, there have been no prior knockout game incidents in Ithaca.

The MSM and police departments have kept the lid on the public knowing about this knockout game, a vicious game that is mostly black on white. After multiple deaths the MSM allows some reporting. We have to suffer while the bolshevik left that runs the MSM treats us like its serfs. When I think of the MSM I think about a rope and a lamp pole.

1. I keep hearing that the statistics say that crime continues to decline, but my anecdotal impression is that things are becoming less safe.

Thirty years ago, I would have given a thought to my personal safety before going into the city; ten or twenty years ago, not; now, again.

2. The knockout game seems an escalation of the flash mob phenomenon. Has flash mobbing declined/stopped, or are reports being suppressed for PC reasons?

3. My gut reaction, which I haven’t thought through, is that it should be legal to respond to the knockout game with potentially deadly force. Among other possible reasons, deadly force is justified because the knockout game is not just a simple assault, but intimidation due to numerical superiority.

<blockquote?From flash mob to knockout game, then on to ____?</blockquote?

An Australian baseball player out for a jog in an Oklahoma neighborhood was shot and killed last week by three “bored” teenagers who decided to kill someone for fun, police said.</blockquote?

An AP story had juvenile delinquent experts saying the way to deal with these teens is with empathy training. Yeah, that works. Pack heat and thin the herd.

“My gut reaction, which I haven’t thought through, is that it should be legal to respond to the knockout game with potentially deadly force.”

Of course it is. It’s a potentially deadly attack.

On point #3, it depends on state law – and maybe Mr. Andrew Branca might weigh in? *wink wink* – but check here.

People have died from being victims of the Knockout Game, and it’s almost never just one thug; wolves travel in packs. Even a cursory look at the AOJ triad – Ability, Opportunity, Jeopardy, as explained here – shows that acting in self-defense is certainly justified, and facing down several aggressive thugs who are likely younger, bigger, and/or stronger provides a
“disparity of force” argument for using potentially deadly force in that defense. IANAL (YMMV), but that’s my take on it, and it appears the Lansing, MI, authorities agree (see the first link).

“My gut reaction, which I haven’t thought through, is that it should be legal to respond to the knockout game with potentially deadly force.”

1) The target didn’t initiate or escalate the use of force.

2) The target didn’t have an opportunity to retreat, if needed by local or state laws.

3) An assault like that clearly puts you in danger of death or serious bodily harm.

4) If the attacker doesn’t immediately flee, they are a continuing threat.

Remember, self-defense gives you the right to STOP THE THREAT to you.

Apparently Option #3 has been exercised in Lansing, MI, but with non-lethal results. The miscreant did get two holes placed in him by projectiles.

I keep hearing that the statistics say that crime continues to decline, but my anecdotal impression is that things are becoming less safe.

It’s a media thing. That which is shocking, scary, titilating or disturbing will attract your attention and your attention is what the media sells to its advertisers. Yes, statistically we are living in a relatively non-violent time. But with the media able to find the exceptions and amplify them, it appears to be more lawless than ever.

A citizen does it his way:

if i see a pack of “black teens”, i’m going to high press, the law or pc be damned.

<a href="http://comonocreerendios-lem.blogspot.com/2013/11/lets-hush-this-up.html"The lamestream media has ignored it so far…

But with local news covering it and attention from Drudge, Fox, Instapundit, LI and a host of other blogs, it is starting to get attention.

Amazingly, you don’t see nearly as much of this in concealed carry states, now do you? Precisely because they don’t want to deal with someone who can fight back.

Madeline Dunham made the mistake of voicing a concern to a future Nobel Peace Prizer . Now she is internationally famous racist & ‘typical white person’.

She is also mysteriously dead on due date .

There have been an increasing number of new conservatives, in the sense of liberals that have been mugged, and a few MSM types who have become victims of the “Knockout Game”. When it starts affecting your own, then it becomes “newsworthy”.

Yeah, that’s why they want to take your legally owned guns away, so you can be easily targeted with “innocent games” like this one.

Maybe Trayvon Martin was trying to do this to George Zimmerman?

At least it seems violence is the preferred method of dealing with problems.

If a person really feels strongly about repealing “stand your ground” laws and really feels strongly that the second amendment only applies to well organized militias (Whatever that means. Hell, I spent 4 years in the U.S. Army and I sure wouldn’t consider that well organized) then they should demonstrate their committment by wearing tee shirts that read, “Unarmed. Choose me.”

If they balk at that, then they are taking advantage of the fact that not knowing if a person is carrying a concealed weapon helps protect everyone, not just the person with the weapon.

But if hypocrisy were a disqualifying attribute for membership in Club Liberal, their membership list would be very short.

Actually, hypocrisy is a requirement.

Have read that the knockout game is called by some perps as “hunting polar bears.”

Speaking as a member of the polar bear community, I am hoping Mr. Braca will comment on the use of a stun gun as perceived perps approach.

(I’m not up to concealed carry yet.)

(Sing along: “Be prepared … that’s the boy scounts’ marching song …” thanks Tom Leher.)

Pepper spray worked for me once. However nothing comes with a guarantee, not even guns.

I asked a guy with a prison history (recovering counselor, former NJ street kid) if he’d heard of this. He said it’s common as hell among all gangs, but not necessarily by that name. He said it’s one of numerous initiation rites, with different gangs requiring different levels of violence, up to and including killing someone. Different gangs have different concepts of who ‘the enemy’ is, so the victimology varies, but in urban areas the gangs are typically black and/or hispanic and victims tend towards white and middle class. Apparently some of the rougher biker gangs have similar initiations. In some gangs, your initiation isn’t to drop or kill somebody Knockout Game style, the gang beats the crap out of prospective new members themselves and judge them on how they handle it.

So yeah, gangs that will beat themselves up probably wouldn’t hesitate to beat up strangers passing by.

That there is no direct profit motive tells you these are animals you are dealing with, fully capable of empathy but reserving it solely for other members of the pack, which serves as family. Anyone outside the ring is less than human and ripe for picking.

I meant to add:

If folks around here can guarantee me post-event legal representation I’d be happy to take a stroll through the MSNBC studios, playing the Knockout Game every inch of the way.

Better to hurt them where it hurts, ratings. Bad viewership= less ad revenue. Even complain to advertisers but apparently Bayer, buys on that scum Bashir’s show, was meh when they got complaints about what he said regarding Palin. I’m not buying Beyer products.

Have we become so wussified that we can’t call a spade a spade?
(pun not intended)
It is simple oh you of little gonads. Concealed carry and don’t hesitate to shoot as many as are in the group as possible. I don’t care if they are 12 year old are more. Crap, they are raping at that age..
Have no mercy when you pull the trigger and remember the innocent dead ones that this knuckle dragging group has caused.

And those mindless, leaderless, lemming democraps and all of their liberal “progressive”friends can line up behind them to howl how so much injustice has been done to these killers.

Yes, but it is called something else–affirmative action.

You should listen to Greta’s interview of a victim of this on fox. She has move past it and was lobbying for more money so these thugs could play basketball instead of beating on people. Pure liberal guilt. She needs to get beaten a few more times.

I don’t want to see any innocent person harmed but when I heard she was from Vermont and worked with this type of teen plus riding her bike in DC; I just knew her viewpoint. However there is hope the masses will stand up to this evil.

For insight into the evil children who play the. Knockout game read the following article:
http://beforeitsnews.com/alternative/2013/07/before-its-deleted-of-the-day-2704520.html

[…] sucking sound hasn’t gotten loud enough Could “Knockout Game” be spreading to DC? Has Knockout Game hit Ivy League? Watch what happens when one of these punks knock out someone important… Video: DEC police car […]