Hacktivist collective Anonymous brought to life on stage – as a ballet

Hacktivist collective Anonymous brought to life on stage – as a ballet 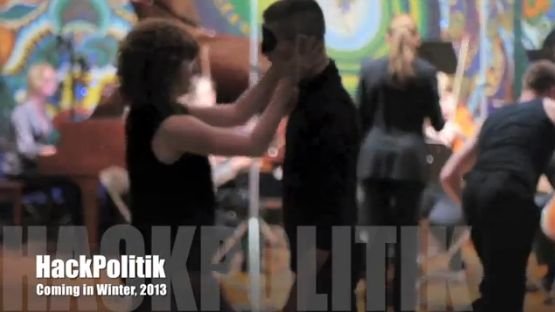 We frequently talk about the idea that politics is downstream from culture, and to some extent, that often includes activism as well.  But this is something I hadn’t quite yet imagined. Hacktivists depicted in a ballet.

Hacker collective Anonymous is going to the ballet. Take that in; it’s not often you’ll see Anonymous and ballet in the same sentence.

The unusual pairing will take place November 15 and 16 at the Boston University Dance Theater, where the Juventas New Music Ensemble debuts “HackPolitik,” a new contemporary ballet based on the hacktivist group’s activities and personalities. The piece combines electroacoustic music, modern dance, and video projection to examine how the Internet impacts 21st century discourse and sometimes blurs the lines between activism and anarchy.

Instead of pastel tutus, expect to see dancers in black and white, with dramatic face paint that evokes Guy Fawkes masks. And erratic, sometimes militant movements instead of fluid pirouettes.

Composer Peter Van Zandt Lane conceived of the idea behind “HackPolitik” in late 2011, at a time when the activities of Anonymous were frequently grabbing news headlines.  Some of those details, such as the collective’s attacks on numerous sites beginning in 2010 in what was dubbed Operation Payback, are weaved into the ballet’s storyline, according to CNET.

Lane leaves it to the audience to make its own connections, as CNET reports.

“The music, on its own, says…disorder, absurdity, cohesion/collaboration, militaristic triumph, humiliation, betrayal, etc.,” Lane says. “Choreography can connect these expressions a bit more concretely to the activities of Anonymous, but ultimately, the audience has to make connections themselves, between a generally abstract art form and the specific events that inspired them.”

The production is a collaboration between Lane and Juventas New Music Ensemble, and The People Movers dance company. CNET reports that the composer, along with choreographer Kate Ladenheim and music ensemble conductor Lidiya Yankovskaya, mined Parmy Olsen’s writings on Anonymous to create the ballet.

“There’s conflict, there’s betrayal, everything you could want from a classic drama. And because it’s all happening in cyberspace, we get to be very creative with how we bring this story to life,” Lane said in the above video interview/excerpt.

I’m not really sure what to say about this…I’m still trying to process “Anonymous + ballet.”

Rahm? Rahm Emanuel, is that you?

Anyone who spends money to see this is an idiot.

Unless they are nekkid no one is going.