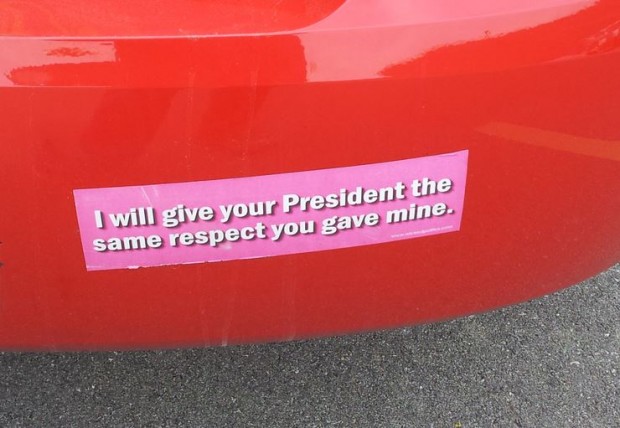 Spied this sticker at the local community college (have actually seen the same car on more than one occasion). Not sure where the driver is coming from, but I share the sentiment with regards to Obama. “Zero” disgusts me so much, words fail me. He is completely unworthy of any respect, as far as I’m concerned.

One thing that has been going on for the last few months is a series of letters and editorials saying that conservatives don’t treat Obama with respect, unlike every other President in history.

They then go on with the usual liberal revisionism of history. They say that George W. Bush was “treated with respect although there were some who disagreed with him on the Iraq War.” If you were alive and breathing for the 8 years of the Bush administration, you probably cannot remember a single day where he was treated with respect in Democratic liberal and media circles.

Even on 9/11, when the nation was stunned, some Dems immediately started the storyline making fun of his reading a book to children and accusing him of cowardice for being on Air Force One.

They assume no one will remember – and with the low-information Obama voters and the major media, they are probably correct.

That is why this bumper-sticker hits so true.

This kind of sentiment is appealing in a sort of playground tit-for-tat kind of way… but it’s Death Spiral of bad idea when you consider the consequences.

Democracy doesn’t work because the Winning side gets to rule the country; Democracy works because the Losing side concedes power until the next election.

Both Bush and Obama were/are my President… because I am an American. Neither ONE has my respect on domestic issues, but Bush has my respect as a man.

Obama is my President… and though I cannot respect him as a man, I can respect him as a representative of over half of my Nation’s voters. Voters who elected a failure, yes… but Americans whose voices were heard, and whose decision must be respected until I can convince enough people to elect somebody better.

I don’t know… it’s early AM on the West Coast… but a lack of respect for Obama doesn’t affect HIM… but it does, us.

I respect the office of President of the United States.

The person occupying that office has to earn my respect. It takes more than just getting elected, to do that. Over half of the voters made a bad choice. Why should I respect that?

MrMichael, there are so many things wrong with your statement, I do not know where to begin…

First, we do not live in a democracy, we live in a constitutional republic. The citizens elect people to represent them in the numerous forms of government. Through their representation, there are no “Winners” or “Losers. There is not a concession of power. Simple majorities are not able to force their will on the entire populace. This is why we have filibusters, cloture, etc.

The expectation is for representatives to fight for the opinions and values of the constituency. When the elected official does not represent the personal views, we are free to move jurisdictions or support other candidates outside of the district.

Furthermore, no respect is needed for a president, of any party. This is most of the problem with the country as we stand today. The president is not a “Parent,” or a part of the “Nobility” of a nation. The president is MY EMPLOYEE!! We as a nation forget that these people WORK FOR US! You can say that the president is the CEO of the country, but he still is responsible to me. I may not be a “Majority Stockholder,” but I can still express my opinion and disagree with everything he says.

I agree with you on this point. It was why our Presidents did not bow to foreign leaders. I said “did not” because someone we know has ditched that tradition.

We are Americans and we don’t bow to any leader. I will treat my President to the same amount of respect he shows to me as a citizen. Currently the occupant of that job has been telling me through many policies to GF myself. He gets the same courtesy.

It depends on how you view the current situation. If you lean towards Angelo Codavilla’s formulation of the bipartisan “Governing Class” -v- the “Country Class”, the sticker makes sense. If you agree with the TWANLOC [Those Who Are No Longer Our Countrymen] formulation, and accept that the American Left and much of the Institutional Republican Party wants to destroy the country and Constitution as it has existed, the sticker is on point. If you believe that the Left in general and the Democrats in media and office in particular act as if they are not bound by truth, civility, or law; then the sticker holds. We cannot “Miss Manners” them out of power.

While both Bush’s left the pooch walking bowlegged on several subjects, I don’t believe that they had hate and contempt for this country and its people the way the current regime and its followers do.

So, since I make my own custom T-shirts [not commercially, just my own use] and order custom bumper stickers sometimes to hand out to friends; I will spread this meme. I will change the color scheme and add the Obama sigil after “President” and add the word “exact” before “same”, and italicize “your” just to make Leftists’ heads explode. Everybody feel free to join in. Alternate version can have the ObamaCare sigil http://luckybogey.files.wordpress.com/2010/04/obamacare.jpg?w=640 in place of his personal one.

Does that bumper sticker mean they want to “Coexist”?

What are they talking about?

Darth Cheney and Shrub McHitlerBurton? Why… Those epithets were uttered in hushed, reverent tones, and with the utmost respect.

Ahhhhh, there I go having a wonderful Flashback to a time when our Enemies were being killed by us and Feared us hugely.. and our Friends RESPECTED us and TRUSTED our word.

I like approaching the leftists in our town who failed to scrape their bumper stickers in 2008. If I see the “Impeach the President Now!” or “Try the President for War Crimes!” that were so prevalent during the “evil years”, I wait for them if I see them walking toward the car. Yeah, it IS that easy to spot them in public.

As soon as they are about to open the door I’ll say, “Right on, dude! The President IS a war criminal! We SHOULD impeach him NOW!!” They look at me with an expression of confusion that would be similar to them seeing a bag of pot on top of a bar of soap.

The things that the Left called President Bush were ugly and reprehensible. (Consider the endless comparisons to Bush with hitler and the full-page painting of Bush eating a baby published in The Nation magazine.) It’s another classic example of leftist hypocrisy that they now demand that democrats be given the maximum respect and consideration.

Not a fan of ‘tit for tat’ bumper stickers. Nor do I like Barbie pink. It clashes on a red car!

Would rather white on black with something akin to:

For Obama scandals a tailgate sticker would be more appropriate.

Her hideous lips are moving: She Be Lyin’,Yo.

Ah, the Golden Rule rears its traditional head. Still, there is a cause and effect which must be discerned.

What did Australia and the USA have in common, at least up until September this year when sanity prevailed over here?

The answer to that question sums up the depth of the comment of that bumper sticker. The common denominator was a Marxist. In our country her name is Julia Gillard, also known as Juliar.

This woman did not deserve our respect. Oh boy, did she do some bleating. That misogyny speech was totally disgusting in my view because the real misongynist was the man that she was protecting, a man by the name of Peter Slipper, but she was sliming the man who is now our Prime Minister.

Never trust a Marxist with power. It goes to their heads, they waste money, think that they are superior to everyone else, and they indulge in corruption. They want to take away our right to freedom of speech, and in your case they are willing to take away religious freedom.

Something else that we had in common was the attitude towards illegal immigrants. They stripped away what was in place that had led to minimal arrivals, and the floodgates were opened. Thousands arrived every month, and more than a thousand drowned. They are uncaring about the welfare of the country shoppers, considering that they contrived to help the people smugglers.

In other words, you can look to other countries and find similarities, and know that the one in charge is bad for the country when they consider themselves to be more important than the rest of the population…. and that description also fits Kevin Rudd, aka KRUDD.