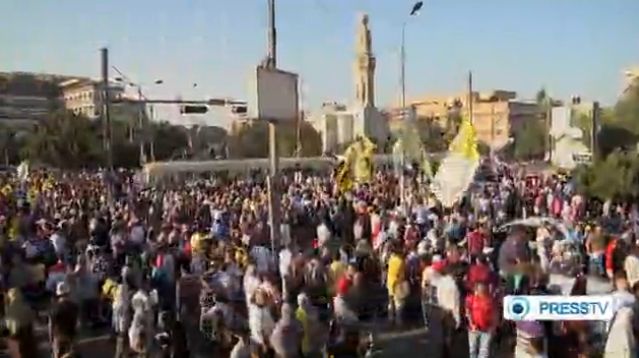 Organizers of demonstrations in Egypt will now be required to provide advance notice to police and face other restrictions on demonstrations, according to a new law passed this weekend.

Egypt’s president passed a law on Sunday making it illegal to hold demonstrations without the approval of the police and banning protests in places of worship, a move rights groups condemned as a blow to political freedom.

As the law was being announced by state media, thousands of anti-government protesters were on streets in Cairo and other cities, as they have been regularly in the nearly three years since a popular uprising ousted autocrat Hosni Mubarak.

The number of protests and the scale of political violence have grown since July when the army removed elected Islamist President Mohamed Mursi following mass protests against his rule.

It imposes jail sentences of up to seven years and fines of up to 300,000 Egyptian pounds ($43,600) upon protesters who carry weapons, explosives, ammunition or fireworks, wear masks or block roads, Badawi said. People who organise protests without permission will be fined between 10,000 and 30,000 Egyptian pounds.

Human rights organizations had expressed concern that the law gives authorities too much discretion and could create an environment like the one that existed under the country’s previous state of emergency.

From the Christian Science Monitor:

The message being sent is clear, says Mohamed Zaree, Egypt program manager at the Cairo Institute for Human Rights: Officials want to normalize the exceptional authority they enjoyed under a state of emergency that endured for much of the past three decades. By giving the police broad discretion to arrest demonstrators and break up protests, some see the new law as a way for the new government to keep a firm grip on power and nip opposition in the bud.

In a joint statement issued by human rights groups in Egypt, the law was criticized before it was enacted, according to BBC News.

“The draft law seeks to criminalise all forms of peaceful assembly, including demonstrations and public meetings, and gives the state free hand to disperse peaceful gatherings by use of force,” the groups said in the statement.

But Egypt’s prime minister maintained the law is intended to protect the rights of protesters, while another government source said that changes had been made to the draft bill earlier criticized by human rights groups, according to Agence France-Presse (via Hurriyet Daily News):

“The president enacted the law on the regulation of the right to hold public meetings, processions and peaceful demonstrations in public places,” presidency spokesman Ehab Badawi said in a statement.  Prime minister Hazem Beblawi told AFP that the new law protects the rights of protesters.

“It is not a law that limits the right to demonstrate, but it aims at protecting the right of protesters,” he said.

Beblawi also said the law does not stipulate that protesters need permission before staging demonstrations, but they must give advance “notice”.

A government source who asked not to be identified said that changes had been made to an earlier draft bill that was strongly criticised by rights groups.

“It allows (protest) organisers to inform the authorities three days before the event, rather than the earlier seven days,” the source said.

Since the ouster of former president Mohamed Morsi, his supporters have regularly staged protests.  Reuters reports that many Egyptians have grown weary of the political turmoil.

There was a time when Egypt was all the rage. Now no one gives a fig.

One of the most overlooked and under appreciated right and innovation of our Constitution.