It’s not entirely clear yet exactly what’s happened, but something funny appears to be going on.

I first noticed it a little while ago when this tweet appeared in my Twitter timeline (the tweet has since been deleted, so below is a screenshot). 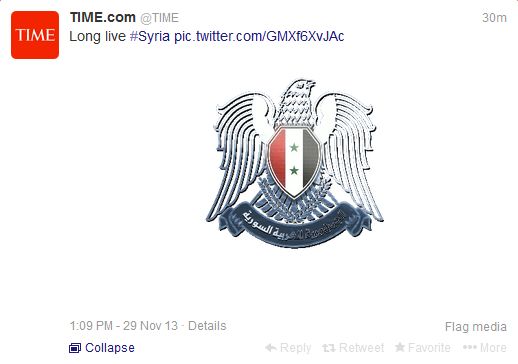 Others caught a shot of this tweet as well before it was deleted.

The Syrian Electronic Army seems to be claiming credit…for something.  I say “something” because I hadn’t seen TIME confirm anything yet as of the time of this writing.  (I’m also extra tired and may have missed it but I don’t think so…hey, Thanksgiving is exhausting).

We think Bashar al-Assad should be @TIME's Person of the Year. Vote now! http://t.co/E8lFZU9uUl #TIMEPOY #SEA

We closed @TIME vote temporarily while they edit the Syrian president description on the website #SEA pic.twitter.com/qQfCcbR6K2

Both Hacker News and Techworm also picked up on the activity.

TIME Magazine has been conducting its TIME Person of the Year poll.  Not surprisingly, the Syrian Electronic Army, which is a pro-Assad hacker organization, thinks that person should be Bashar al-Assad.

Not much difference in the content of the tweets. If anything, the SEA tweets are more intelligent.