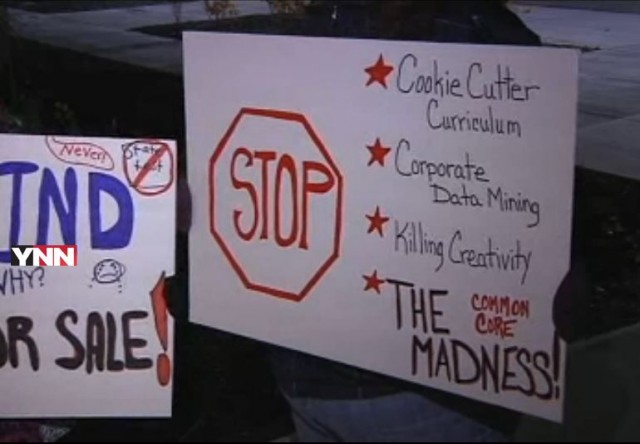 The Ithaca Journal has an investigative article on the rollout of Common Core in the upstate Southern Tier region of New York State, Common Core fix for schools has broken parts.

The article is in depth and frank in the assessments from school administrators and teachers.

Here’s the summary at the beginning,

The newest fix to public education known as Common Core is arriving with incomplete plans in schools and at a rapid pace that leaves some students behind.

While the controversial educational standards have been blessed by hundreds of educators and adopted by 45 states, including New York, cracks are opening in the Common Core foundation that are raising concerns for teachers, parents and school administrators.

“The reality is implementation at the state level is just a disaster,” said Tom Phillips, of Hector, and Watkins Glen school district superintendent.

While Phillips said he agrees public education needs reform, his major beef with Common Core is the complex program is being rolled out too quickly.

The problems ranged from the one-size fits all curriculum, to chasing the funding money. In a situation eerily similar to subsidies for state health care exchanges that may dry up, there are concerns about Common Core funding drying up:

Improving student performance is one reason for the rapid launch of Common Core standards into schools, but money is another.

“Let’s not forget there are 730 million reasons why New York state is doing this. They received $730 million from the federal government to do this,” said Watkins Glen school district superintendent Tom Phillips.

But, the attraction to the federal dollars can come with a price for local schools.

In New York State, BOCES is playing a central role in assisting districts with the Common Core by training teachers and administrators, and printing modules for the districts at a low cost.

TST-BOCES Assistant Superintendent Heather Sheridan-Thomas, of Freeville, said while the curriculum itself is free through Engage NY, a website resource operated by the state education department, many of the associated texts are not.

“It’s a cost, and it’s a cost at a time when districts are laying off teachers,” Thomas said.

Whether those federal dollars fueling Common Core programs will continue is a worrisome unknown.

“I love working with BOCES,” said Newfield principal Vicky Volpicelli, of Groton. “They have a network team, which some of that Race to the Top money helped pay to hire to support us. They’ve been wonderful. I feel very supported. Now, the problem is when that money dries up … Then it will be again, can the districts pull together and sustain to keep those positions?”

It’s unfortunate that the article is set out over six screens and behind a limited visit paywall, making it more difficult to read. That’s how Gannett does things for its upstate local papers, and likely why despite being turned live three days ago the article only has two Twitter shares, no Facebook shares, and a comment from one person.

It should be shared widely.

All the WORST of a failed model from LAST century in an iPad generation.

Is that really “Communist Core?”

Common Core is the latest scam designed to move money from the taxpayer’s pocket into the pocket of bureaucrats and curriculum/test publishers.

It has been happening for about 100 years now. American education moves in cycles through a limited number of failed fads and practices.
How is that possible?
How can we explain that the number one economy of the world continues to struggle with failed public education for so long?
Where is American Ingenuity when it comes to public education?

The answer is right in front of us, and it is called Department of Education. It is a legion of bureaucrats that need to justify their salaries.
There’s also a powerful lobby of publishing companies that need to sell a new product every four or five years. Standards need to change so that the previous books become obsolete.
Failure is also another selling point. We buy new programs because the previous one is not working, but failure is already programmed within the new.
…And the unions, don’t get me started on that one.

Humourous part? Dept of Ed was created by Nixon, who the teachers slam every chance they get.

Common core class picture: you are one of the many faces on The New Republic Magazine’s cover “Hillary’s Nightmare”

Well. They are being honest for a change: “A Democratic Party that realizes its soul lies with Elizabeth Warren” (“Lies” as in prevaricates.)

duh! please explain how something as immoral and feckless as govt schools can be fixed. how about examining the premise and the folly of govt schools manned by union rats.

From what I have read in the past few months, “Common Core” has more than “broken parts.”

It has the makeup of a systematic way to deprive the masses of their freedom from tyranny. Indoctrination indeed..

The sponsoring agency for the Common Core put out a document last February making it clear it is students “dispositions” being targeted. I wrote about it here with the link to document. http://www.invisibleserfscollar.com/utopian-education-creating-mindsets-that-push-future-fighters-for-something-beyond-the-current-real-world/

I have also explained that the actual required implementation is cultivating mandated communitarian values, attitudes, and beliefs. So Commie Core may be a cute sarcastic phrase but it’s not an inaccurate one either. It has to do with understanding Marx’s theory of human development as a necessary component of a society with a collectivist orientation.

The real mandated Common Core is Chapter 7 of my book and the rest of the book frames what has really going on for decades. Truly an astonishing story. The tie to healthcare reform has to do with targeting subjective well-being as a legitimate responsibility of 21st century governments.

So sad. Once upon a time New York had one of the best school systems. I guess that would be 50 years ago now…

I hear voices. They are telling me to kill them all. Should I obey or refuse?

How will that scenario play out to a counselor educated by Common Corpse? Will it be a global analysis, and which part of the globe should the analysis favor (other than those despicable Western Civilizations)?

My 3rd grader’s school here in CA is now using Common Core. It’s the most ridiculous thing I’ve ever seen. In learning to subtract, he was told he’s “not allowed” to borrow. They do all these number games…zero-zapper, number lines, etc. It’s like they’re trying to turn math into a subjective practice. He starts multiplication this week, and they aren’t even teaching them to memorize the multiplication tables. They are forced to “think about” the concepts of math. Whatever. Math was easy for me. I memorized the basics, learned the concepts, and never had a problem. My son can often figure out an answer in his head, and he gets in trouble if he doesn’t show gratuitous work. I teach him my way at home and tell him not to worry about it as long as his answers are objectively correct.

I recently met a woman named Nancy Sokel Green, who was a teacher, author of curricula, educational consultant, and finally, developed a program to help kids struggling in school due to a variety of learning and developmental issues. She’s doing some amazing work with children of all ages. About a decade ago she was given a math curriculum written by Harvard mathematicians and asked to adapt it for use in elementary schools. She didn’t understand most of it, because the way mathematicians think about math is so different from how it has been taught traditionally. Many of the math games and “new” way of manipulating numbers reflects the way mathematicians think about numbers and performing math functions, which is vastly different than learning by wrote memorization. That’s the idea anyway, but the execution in the classroom isn’t necessarily successful.

This kind of approach was tried before for Reading instruction. They came out with Outcome Base Education and the Whole Language approach. They tried to eliminate the teaching of phonics because… accomplished readers read by sight word recognition. Never mind that those accomplished readers had to go through the process of learning to identify and remember those words through phonics in the first place.

That line of thought is ridiculous. You don’t start at the top. Learning begins at the beginning.
Expecting kindergartners to think like a Harvard mathematician will yield the same results as trying to get the same kindergartner to read fluently without learning phonics: failure.

I have a kindergartener and a 2nd grader in California schools… for now. School has become all about the STAR test at the end of the year. (A neighbor who is a former PTA president informed me that when the test scores go up, the teachers get a bonus. Not sure if this is true.) It’s not about learning, it’s about the damn test.

Beginning next week, I will be homeschooling my 2nd grader. He’s learning more with me at home doing homework than he is in the classroom as it is. Classroom time is spent learning technology (not necessarily a bad thing) and feel good activities. However, teaching kids to use an iPad at the expense of the three R’s is insanity.

I will be homeschooling my younger son beginning next year. He has a wonderful K teacher and is having the time of his life. He’s excited about learning and being challenged. I’ll pull him out before 1st grade to avoid a miserable experience like we had last year with my older son.