Now Democrats get to appoint her successor and hold the state Senate. 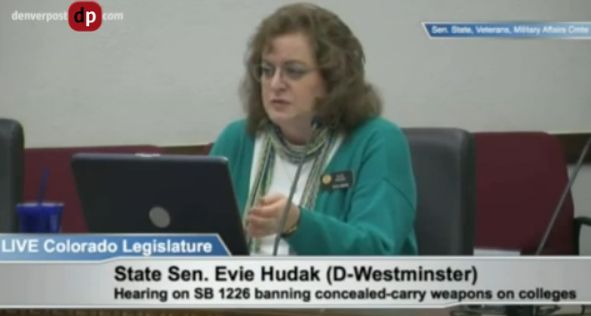 In the midst of a petition drive to collect signatures calling for her recall, Colorado state Senator Evie Hudak announced her resignation today.  Hudak became the target of a recall threat after her support in passing Colorado’s gun control laws.

State Sen. Evie Hudak has decided to resign rather than risk facing a recall election that, should she lose, would flip control of the senate to Republicans, FOX31 Denver was first to report Wednesday.

“In the interest of preserving the progress made over the last year, I am resigning as State Senator for District 19, effective immediately,” Hudak wrote.

Hudak, D-Westminster, could have been the third Democratic lawmaker to face a recall over a package of gun control bills they helped pass earlier this year.

Two other Democratic state senators in Colorado faced recall elections and lost to Republicans in September.  Senators John Morse of Colorado Springs and Angela Giron of Pueblo were challenged with the recalls after their votes for stricter gun laws in the state.

Hudak’s resignation allows the seat to be filled by an appointment made by a Democratic vacancy committee until November 2014, when an election will be held.

Compass Colorado, the group helping to lead recall efforts, has released a statement.

“This is yet another indicator that the tides are changing in Colorado politics,” Executive Director of Compass Colorado Kelly Maher said in a statement. “Coloradans are sick of the extreme Democrats trying to control their lives. These “progressives” have overreached so far on so many issues that Colorado families are now ready for a new vision.”

Hudak is vile and disgusting. I’d rather she had crashed and burned in a recall than taking the cowards way out to preserve her seat until next year.

Sanddog…you’re too kind in your remark about Hudak. As being unfortunate enough to live in Hudak’s various districts as she climbed (or slid) into the muck that is Democratic party corruption, I’ve had many an occasion to see her behaviors and statements live and up-close.

I’m thinking she or the Democrats did some private polling and found that Evie had long passed her shelf life. The fact that she or Democrats recruited folks to wave signs in support of Evie at petition locations and harass petitioners with robocalls warning folks that the petitioners were criminals and perverts says a lot about the panic that is setting in for union preservationists and progressives.

And the risk that the Republicans would’ve taken control of the CO Senate meant that she had to resign. There were too many people I spoke with during the last 2 months that really didn’t like Hudak or the attitude she and Democrats display…what I really don’t like is that the Democrats get to pick her replacement, not the voters.

State level Dem/libs are like stormtroopers apparently – expendable, one goes down, just plug in another.

I looked up the Colorado Revised Statutes and §1-12-109 seems to indicate that the recall can still proceed even though the target resigned. If successful, that would place the new candidate selected in the recall petition into office rather than let the dems appoint someone. Perhaps the legal minds here can confirm that.

The next paragraph in the statues says: ” if the officer whose
recall is sought resigns at any time prior to the deadline to submit a petition as a successor candidate… the recall election shall be canceled.

Well that’s not exactly what the statute says, is it? Here’s the whole section you mentioned (emphasis mine):

if the officer whose recall is sought resigns at any time prior to the deadline to submit a petition as a successor candidate in accordance with section 1.12.117, the recall election shall be canceled.

(2)If the officer whose recall is sought resigns at any time after the deadline to submit a petition as a successor candidate, the recall election shall be called and held notwithstanding the resignation.

So did Hudak resign before the deadline to submit the petition?

Since petitions were actively being collected, it is fairly apparent she resigned before the deadline to submit petitions. Had she resigned after the petitions had been collected – and submitted, then an election would have been called.

Okay. She resigned. Probably has money in her re-election kitty. And, she probably also has a “soft landing” job available, too.

Now people will vie to get their names up. Will there be a special election?

Political promises, ahead, will sound just like “If you like your plan you’ll get to keep your plan.”

While the GOP, instead of limiting your access to guns, will limit women’s access to abortions. Nothing new to see here.

Talking about guns, what’s the chances for George Zimmerman to have lost his five guns?

Spot on! I think there’s little doubt she’ll land on her feet probably with a “no show” job appointment of equal or higher pay. She will be rewarded for taking one for the team.

But we’ve been told that middle of the road, commonsense gun control is popular with voters.

Hudak is the witch who confronted the rape victim who testified against the Colorado gun control bill that had she had the weapon she had a concealed carry permit for on her at the time, she probably would have been killed with it.

Was she the inspiration for the disguise Ah-nold wore in Total Recall?

It’s time for conservative Coloradans do their magic on a recall of ‘da guv’…if he allows another gun grabbin’ RAT to take the seat!!

Put the clown on notice and follow-up with a recall if he fails to heed the warning.

The have the signatures for a recall. Can’t they just recall her replacement by asking everyone who signed to sign a new recall petition?

When Hidak resigned with th deliberate intent to thwart the will of the people, can he replacement be recalled?