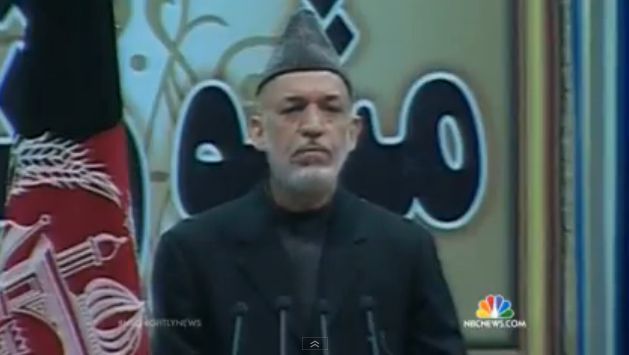 Against the recommendation of elders, Afghanistan’s president Hamid Karzai said on Sunday that he would not immediately sign a security deal with the US, according to the Associated Press.  The news comes after a six-day showdown between Karzai and the US.

From the Associated Press (via ABC News):

Afghanistan’s president said on Sunday he will not sign a security deal with the United States until next April’s elections, ignoring a recommendation by an assembly of Afghan elders and leaders that he do so by the end of 2013.

Hamid Karzai’s refusal to accept the Loya Jirga’s overwhelming approval of the Bilateral Security Agreement and its request that he sign it in a timely manner puts in doubt the question of whether the U.S. will keep troops in the country after the withdrawal of foreign combat forces in 2014.

Karzai gave the 2,500-member national consultative council a series of conditions, some ill-defined, that he said needed to be met before he signed, including “peace,” the cooperation of the United States on the implementation of the Bilateral Security Agreement and fair elections on April 5.

“We want security, peace and we want a proper election. You have asked me that I should sign it within a month. Do you think that peace will come within a month?” he asked the assembly. He did not elaborate on his conditions for signing but his spokesman Aimal Faizi said: “Not before elections! He was clear enough.”

President Barak Obama’s administration has said it wants a deal signed by the end of the year and warned that planning for a post-2014 military presence may be jeopardized if it is not approved by Karzai.

The US has been planning to maintain a limited military mission in Afghanistan to continue training and assisting Afghan security forces, and to conduct counterterrorism missions when needed (a plan itself that is not without its criticism).  The Obama administration has previously said that it would withdraw US forces unless a security deal was signed.

The AP explains the likely motive for Karzai’s hesitation.

Karzai seems to be concerned about his long-term legacy, that he doesn’t want to be seen as the Afghan leader who agreed to keep foreign troops in his country beyond 2014, when a NATO mandate ends and international military forces depart Afghanistan. His move also could be an attempt to avoid taking personal responsibility for an agreement that some Afghans might see as selling out to foreign interests.

“If I sign it and peace does not come who will be blamed for it by history? If I sign it today and tomorrow we don’t have peace, who would be blamed by history. So that is why I am asking for guarantees,” Karzai told the assembly.

[…] Karzai stunned the U.S. when he urged delegates on Thursday’s opening day to approve the security pact but said he will leave it to his successor to sign it.

Mr. Karzai might want to remember what the Taliban did to the last Afghani president they overthrew and captured. It wasn’t pretty.

We can’t force Afghanistan to be a nation. It might be the best thing for the country to devolve into its constituent parts: Pashtunistan in the south, and a series of small states in the north and west for the various major tribes. We’re friendly enough with the latter groups since we helped save them in late 2001 from the Pashtuns; I’m sure we could work a deal for their security in exchange for some modest military presence and training.

Someone has to explain to me why Afghanistan is worth saving. I personally don’t see it.

“Someone has to explain to me why Afghanistan is worth saving. I personally don’t see it.”

It’s for the pending “Graveyard of Empires” theme park.

Come on Hamid, you can trust barry!

‘In fact, right after I shoot a few hoops today, I’m meeting with the computer developers that built my impressive BarryCare website.

Do WE have a security program for you!

There will be no presence in Afghanistan of many / any of the supporting forces. The plan was to base the special services contingents in Kabul whilst the bulk of the infantry & associated services leave.in a semblance of orderly manner.

About 4 months ago I heard this deployment was off the table completely due to a lack of American preparation .

Afghanistan is a great place to visit if you are a superpower looking for a place to die.

The AP story has been edited.

Among other things, it USED to say “President Barak Obama’s administration has said it wants a deal signed by the end of the year “… (Note the misspelling – heh).

NOW it says ” The U.S. administration has insisted the deal be finalized by the end of next month”…

The President is not referred to anymore. The posture described is much stronger (wants changed to insisted), and it’s all moved up ahead of Karzai’s waffling.

We have overstayed our welcome by over 10 years. We should have overthrown the Taliban and then left and as we left told them all if they tried to attack us we would be back and cover their entire country about a foot thick in pig’s fat.

It is clear that we no longer have any real reason to remain in Afghanistan now that Usama Bin Laden has probably been completely consumed by crabs and other denizens of the floor of the Arabian Sea.