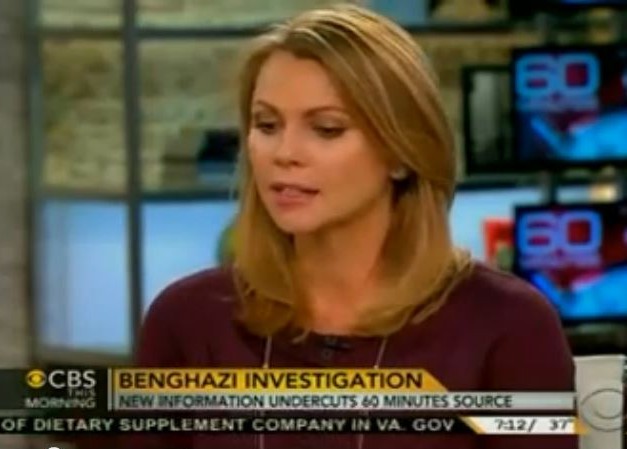 Lara Logan has been ordered by CBS to take a leave of absence, a month after the “60 Minutes” correspondent ran a report featuring a witness of the Benghazi attack whose claims of being on the scene were later disputed. Logan’s producer, Max McClellan, was also asked to take a leave as well, according to the Associated Press via Yahoo News:

The show relied on an interview with a security contractor who said he was at the U.S. mission in Libya the night it was attacked last year, but questions were raised about whether the source was lying. A CBS internal report obtained by The Associated Press on Tuesday found the network did a poor job vetting the story.

CBS Chairman Jeff Fager, who is also the “60 Minutes” executive producer, said he asked Logan and her producer, Max McClellan, to take a leave of absence. The length of time wasn’t determined.

Logan had also been scheduled this week to host the International Press Freedom Awards Dinner to benefit the Committee to Protect Journalists, but will no longer be doing so, according to Politico.  Instead, Logan’s “60 Minutes” colleague Scott Pelley will be hosting.

The October 27th program on “60 Minutes” drew criticism after its airing, as other news outlets challenged the veracity of the on-scene claims of Dylan Davies, a.k.a. Morgan Jones, leading to an apology and eventual retraction of this portion of the program from CBS.  The publisher of the book written by Davies, “The Embassy House: The Explosive Eyewitness Account of the Libyan Embassy Siege by the Soldier Who Was There,” also later withdrew the publication.

I think that trusting the integrity of Scott Pelley over Lara Logan says all you really need to know about CBS News and the Committee to Protect Journalists.

Is this not the woman molested during the initial riots in Egypt? Why would she not be checking and re-checking her facts? How could she, or her producers, not KNOW that this man’s credibility had been in question – and that CBS “producers” apparently knew it?

This doesn’t pass the “smell test.”

Is she perhaps being made the “fall guy” for dampening down the Benghazi story, to minimize the damage?

She has a sterling reputation, from what I’ve read. She is also a “true believer” kool-aid drinker from what I’ve also read. Perhaps she is taking the fall willingly……..?

CBS accepted the FBI’s story over Davies immediately, no questions asked. No thought of checking them out. 60 minutes has been unworthy of being called an investigative news program since 1968’s Hunger in America fiasco, depicting a baby with a heart defect as dying of hunger, and later claiming the mayor of San Antonio referred to Hispanics as “children”, nearly starting riots. They all need to take a leave of absence. They do not report the news, they create it . . . literally.

Wait…. 60 minutes is as American as alar coated apple pie.

Dude, you’re like some kind of time traveling prophet seer man – it was a faulty 60 Minutes story that led to the demonization of alar (daminozide).

Here is the link to this site covering part of the story a couple weeks ago.

“It is unclear as of this writing how much of the story was wrong, whether just the witness’s presence on scene that night or more of his story.

Regardless, this is like manna from heaven for those who say Benghazi is a phony scandal.”

I give CBS and 60 Minutes a pass on this. We can’t hold them to the same standards to which we hold news organizations.

You’d think CBS would have learned from Dan Rather and Memogate (the only true service Charles Johnson and LGF have performed).

I’m rather surprised because I would have thought that before going up against the White House on Benghazi, CBS would have triple-checked every statement, document, source, etc., so as to be able to withstand the sh!tstorm that would inevitably come their way. Looks like they didn’t.

Are they checking out the FBI version? Or did they and found they have to back down, and this is the way to do so without looking even more stupid?

(the only true service Charles Johnson and LGF have performed).

Actually, I think that honor goes to “buckhead” at Free Republic.

Thank you, I gratefully stand corrected!

It is a ploy to spread the blame / responsibility.

The previously shielded witnesses have made statements in congressional confidence .( my best interpretation) .& it is coming down the wire slowly that almost everything we were told is wrong. For example there was no brave security agent escaping a smoke filled building under gunfire . No shots were fired by staff & he was found hiding in a cupboard.

The biggie is still that Obama left the next morning for a Nevada fundraiser . But if people were not bothered by this they will not be bothered by anything.

Something so very egotistical in this affair. The woman is raped, mutilated and otherwise violated in Cairo. She is lucky to be in one piece, presumably, and alive. And she is back in front of a camera?! And has not learned from Rather-gate to fact-check her story? And the witness lied, to her or the FBI or both? For what it’s worth, I buy none of it beyond her violation in Cairo. The body can be violated and goes to corruption. The ego is immune from both destinies. I do not expect actors to report themselves truthfully. “Newspeople,” “journalists,” are actors in the entertainment business. They live on ego. They are good at what they do, but, “movies is magic.” It ill-behooves others to take them seriously.

Oh come on . What they call rape these days could be manhandling a few decades ago.

It is common practice for little Egyptian boys to run up to tourists & stick their fingers up one’s bum .

What is rape mr Graham is the 14 year old Obama look alike who knifed his female 24 year old maths teacher in the school,bathroom . Then he took her body in a recycling bin to the grounds & defined her with a 3 foot branch. ( I have to hope she was already dead but may have been still alive ) . Then he posed her in a sexual position with the tree branch inside her body.

That is rape + mutilation + violation .