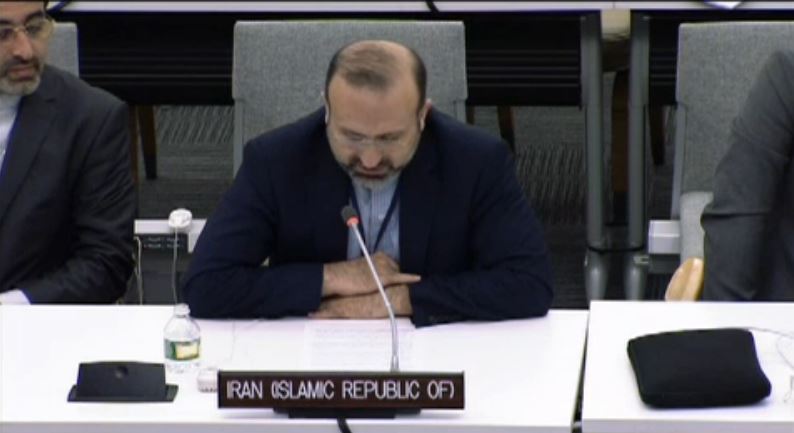 After Prime Minister Benjamin Netanyahu addressed the United Nations General Assembly last week, a number of op-eds in both the New York Times and Washington Post criticized him.

A reading of the speech shows that it was quite skilled. Netanyahu explained how Iran is ruled by a regime that is currently destabilizing the Middle East and exporting terror globally. He also explained how, in the past, Iran used the illusion of moderation and negotiations to advance its nuclear program. (This is something that then candidate Hassan Rouhani boasted about in a recently reported video.)

But Netanyahu wasn’t arguing to attack Iran. He was arguing to keep sanctions in place, and strengthen them if necessary, to prevent Iran from developing nuclear weapons. (In fact the public statements of the Obama administration don’t sound that different from what Netanyahu said about sanctions.) The threat of military force was meant as a last resort.

Still it didn’t stop journalists from mocking Netanyahu. Though he didn’t criticize Netanyahu’s speech, Max Fischer amplified a mistake Netanyahu made into a major policy gaffe.

American journalists weren’t the only ones to scorn Netanyahu

Last week after Netanyahu’s speech, Iran was granted the right of reply.

The Iranian diplomat who was charged with the task was First Secretary Khodadad Seifi.

Both Seifi, and parts of his formal response were quoted in various news sources. For example, here is the New York Times:

Iran swiftly issued a rejoinder. Khodadad Seifi, first secretary at Iran’s mission to the United Nations, said that his country had found Mr. Netanyahu’s speech inflammatory, rejected the notion that Iran was building a nuclear arsenal and asserted its right to self-defense.

“The Israeli prime minister better not even think about attacking Iran, let alone planning for that,” the Iranian diplomat said. He added that Iran’s “smile policy” was better than “lying.”

These quotes came from the end Seifi’s response. But what’s more interesting is what Seifi said at the beginning. The New York Times noted generally that Seifi “rejected the notion that Iran was building a nuclear arsenal.” Specifically, this is what he said:

All Iranian nuclear activities are, and have always been, exclusively for peaceful purposes.

Iran continues to fully cooperate with the IAEA and all its nuclear activities are carried out under surveillance cameras of the Agency and its resident inspectors who regularly visit all nuclear sites and measure and seal enriched uranium containers.

Some of Iran’s cooperation with the Agency have been beyond its legal obligations. They are carried out to build more trust and confidence.

At best this is misleading; at worst it is a bald faced lie. Here are some selected accusations from the IAEA report (.pdf) that Seifi cited to “prove” that Iran was not “building a nuclear arsenal.”

Contrary to the relevant resolutions of the Board of Governors and the Security Council, Iran has not suspended its enrichment related activities in the declared facilities referred to below. …

Iran has not provided a substantive response to Agency requests for design information in relation to announcements made by Iran concerning the construction of ten new uranium enrichment facilities, the sites for five of which,
according to Iran, have been decided. …

Contrary to the relevant resolutions of the Board of Governors and the Security Council, Iran has not suspended work on all heavy water related projects, including, at Arak, the ongoing construction of the Iran Nuclear Research Reactor (IR-40 Reactor), which is under Agency safeguards, and the production of heavy water at the Heavy Water Production Plant (HWPP), which is not under Agency safeguards. …

In resolution 1929 (2010), the Security Council reaffirmed Iran’s obligations to take the steps required by the Board of Governors in its resolutions GOV/2006/14 and GOV/2009/82, and to cooperate fully with the Agency on all outstanding issues, particularly those which give rise to concerns about the possible military dimensions to Iran’s nuclear programme, including by providing access without delay to all sites, equipment, persons and documents requested by the Agency. As indicated in Section B above, it has not been possible for the Agency to begin substantive work with Iran in this regard. …

As the Agency has repeatedly made clear to Iran, the extensive activities that Iran has undertaken at the aforementioned location on the Parchin site have seriously undermined the Agency’s ability to conduct effective verification. It remains essential that Iran provide substantive answers to the Agency’s detailed questions regarding Parchin and the foreign expert, as requested by the Agency since February 2012,and provide access to the location, without further delay.

Imagine for a moment that a body of the U.N. had made charges against Israel, no matter how baseless; you can be sure that many of these same reporters would have decided that was newsworthy. Here the IAEA documents Iranian subterfuges to create a nuclear arsenal and no one bothered to check if the Iranian diplomat’s defense of his country was accurate. All they were concerned about were his rejoinders to Netanyahu!

So a diplomat lied. It’s no big deal. A diplomat’s job is to present his country in the best possible light, even if that requires spinning or bending the truth. Seifi just bent the truth past the breaking point.

Additionally, Iran was so upset with the IAEA report (that supposedly affirmed that it was cooperating with IAEA) that it responded with an impolitic letter accusing the IAEA of overstepping its bounds. If Iran’s official response to the IAEA report was so strong, it’s not possible that one of its diplomats wouldn’t know.

But there’s more to the story.

Last week, after PM Netanyahu’s speech, the U.N. announced that Iran would server as he rapporteur for General Assembly’s committee on Disarmament and International Security, otherwise known as the First Committee. Claudia Rosett explains why this selection is such a travesty:

This is worse than the fox reporting on the henhouse. For starters, it is one more front on which the UN, while sanctioning Iran via the Security Council, lends legitimacy to Iran by giving it slots that imply it is a member in good standing of the fabled international community. And then there’s the problem that Iran’s regime has become highly adept at exploiting its UN beachheads in ways profoundly unfriendly to the free world, notably Israel and the U.S. It was Iran’s deft moves within the First Committee, for instance, that produced the charade of a nuclear disarmament meeting, starring Rouhani, at the UN General Assembly opening last week.

There’s one last sick irony. The person who will actually be the rapporteur is the exact same person who, last week, lied to the General Assembly about his country’s nuclear program: Khodadad Seifi.

What does that say about the credibility of the U.N.’s disarmament efforts?

Once Upon a Time, the NYT was a vast storehouse of Journalistic Integrity.

Now, it is only half-vast.

Those who oppose Israel and side with Islamists reveal the dark content of their souls.