The Hatred that the New York Times Dares Not Report

The Hatred that the New York Times Dares Not Report

Why does the New York Times refuse to report on the ongoing Palestinian incitement against Israel? 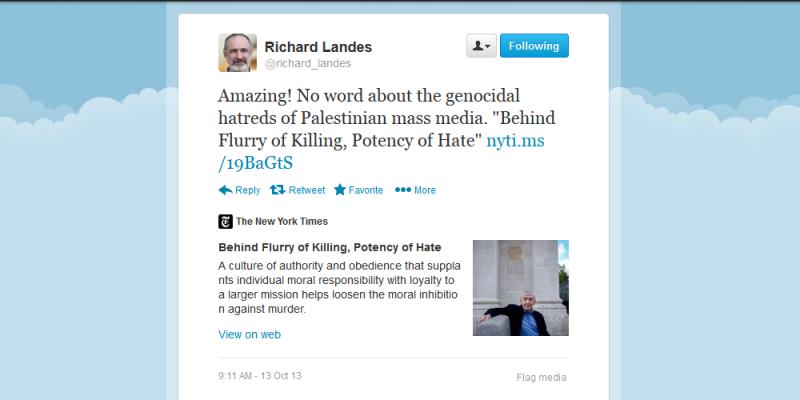 The New York Times on Sunday featured an article, Behind Flurry of Killing, Potency of Hate, which focuses on how dehumanizing an enemy makes it easier to kill. The article focuses on a convicted, jailed and released IRA terrorist and how he could be conditioned to kill. Then the article continues:

Historical parallels are inevitably flawed. But a recent flurry of horrific bloodletting — the attack in Nairobi that left 60 dead, the execution by Syrian jihadis of bound and blindfolded prisoners, an Egyptian soldier peering through his rifle sight and firing on the teenage daughter of a Muslim Brotherhood leader — raises a question as old as Cain and Abel: Do we all have it in us?

Many experts think we do. For Mr. O’Callaghan, it was a matter of focus.

“What you’re seeing in that moment,” he said in an interview last week, “is not a human being.”

The article also mentions how Nazis could be brought to slaughter Jews (and describes the murderers in oddly sympathetic terms!). But it left out the most systematic delegitimization campaign going on now: the one by Palestinians that targets Israel.

Amazing! No word about the genocidal hatreds of Palestinian mass media. "Behind Flurry of Killing, Potency of Hate" http://t.co/wineG4I1Os

Two and a half years ago terrorists brutally killed four members of the Fogel family.

After the killings, the Israeli government blamed the Palestinian Authority for the incitement that led to the horrific crimes. Here’s how the New York Times reported the issue:

Yossi Kuperwasser, a retired Israeli general given responsibility by the Israeli government for monitoring Palestinian incitements to violence and to hatred of Israel, said in a telephone interview that while Mr. Abbas and the Palestinian Authority prime minister, Salam Fayyad, had been careful in their words, ”they too encourage an atmosphere of terrorism.”

He noted, for example, that a senior Abbas aide had paid a call to the families of three Fatah militants killed by the Israeli military, conveying condolences from Mr. Abbas. Israel held the three responsible for the fatal shooting of a rabbi in the West Bank in December 2009. In addition, Israeli officials note, streets, summer camps and youth tournaments in the Palestinian Authority have been named for people who committed terrorist attacks.

The new focus on incitement against Israel, together with Israeli dissatisfaction over the Palestinian response to the brutal attack, seemed to pose a question about the Israeli government’s readiness to deal with Mr. Abbas as a serious peace partner — even though Mr. Abbas and Mr. Fayyad are widely considered moderates who have repeatedly said they would never resort to violence.

Note a few things here. First of all, the reporter added the unnecessary qualification “Israel officials note.” These occurrences are not the result of charges made up by Israeli officials, but well documented facts reported by Palestinian Media Watch and others. The focus on incitement is nothing new; it was something that Netanyahu pointed out regularly when he was Prime Minister in the late 1990’s. No one listened, but that hardly means that the focus is new. Finally, somehow the incitement was twisted into a reason to doubt “Israeli government’s readiness to deal with Mr. Abbas,” rather than a reason to question Abbas’s “moderate” credentials. If the same standard in today’s article applied, the reporter 2 1/2 years ago wouldn’t have failed to make the connection.

If these journalistic sleights of hand weren’t enough, the reporter continued:

Mr. Abbas rejected the claims about incitement in mosques, telling Israel Radio that the Palestinian Authority mosques have adopted a unified text for sermons, written by the minister of religious affairs. He called for a joint Israeli-Palestinian-American working committee to investigate claims that Palestinian Authority school textbooks incited violence.

Did Abbas prove his lack of culpability? Of course not. As noted above, the incitement is documented. But the reported simply took his claim at face value.

In 2001, Charles Krauthammer made an important point about the killings of Kobi Mandel and Yosef Ishran, in The Boys in the Cave:

It is savagery so grotesque that it might not have been believed had we not all seen that picture last fall on the cover of Time of the Palestinian, having just beaten to death the two Israeli reservists in Ramallah, exultantly holding out his blood-stained hands to the crowd in a gesture of triumph.

People are not born with bloodlust. They learn it. It is no mystery where the Palestinians have learned it. For years Arafat’s mini-police-state has been feeding his people the rawest Jew-hatred since the Third Reich. In television, radio, newspapers, and textbooks, Arafat has created the psychic infrastructure that sustains his endless war on Israel — and gives us the barbarism in the cave.

I brought up two past cases, but this is still going on.

The man, Sariya Ofer, 61, was attacked around 1 a.m. by at least two people in the yard of his house at Brosh Habika, an isolated resort village that he ran and that was empty of visitors at the time. His wife, Monique, who escaped and called for help after reaching a highway, said Mr. Ofer had gone outside after hearing noises. …

Still, some right-wing politicians were quick to attribute the attack to terrorism, and they called on Israel’s leaders to refuse to release any more Palestinian security prisoners, which Israel has been doing as part of an American-brokered deal for the resumption of peace talks. The first group of 26 long-serving prisoners was freed in August; three more groups are expected to be released in the coming months. …

Prime Minister Benjamin Netanyahu has not responded publicly to the calls from the right to suspend prisoner releases. But President Mahmoud Abbas of the Palestinian Authority said in a television interview on Friday that if Israel did not go through with the planned prisoner release he would no longer keep his commitment to suspend Palestinian efforts to join international agencies during the nine-month period allotted to this round of peace talks.

The reporter leaves out any real evidence that there could be a relationship between the releases and the rise in terror incidents (outside of the claims of “right-wing” Israeli politicians). In fact the very same reporter gave a reason in August when she reported Israel Releases 26 Palestinian Prisoners, to Cheers and Anguish:

Still, here on the Palestinian side of the divide, the prisoners, most of whom had served 20 years or more in prison for deadly attacks against Israelis, were viewed as political prisoners who had sacrificed for the cause and a potent symbol of resistance to Israeli occupation. …

Also among those released was Yousef Said Abdel Al from Gaza, where hundreds of relatives and supporters waited to greet the freed prisoners at the Erez crossing. Mr. Abdel Al was convicted of being an accessory to the murder of Ian Feinberg, an Israeli lawyer who was bludgeoned to death with an ax in 1993 while working on a European aid project in Gaza. He was 30 and married with three children.

This was outrageous at the time and doesn’t look any better now. The murderers who were released were not by any reasonable definition “political prisoners,” and the reporter just took the claim and added the justification of “resistance to the Israeli occupation.” This isn’t reporting an extreme position but justifying it.

If one of these “political prisoners” bludgeoned someone to death, well the lesson was learned. Bludgeoning, by this perverse calculation, is a political act neither a criminal nor a terrorist act. But when writing about the response to last week’s killing, she presents Abbas’s response in a vacuum, even though she implicitly made the connection between incitement and terror two months ago. Again the New York Times is avoiding this obvious connection.

Incitement kills, according to the New York Times, except when Palestinians incite against Israel and Jews.

“Why does the New York Times refuse to report on the ongoing Palestinian incitement against Israel?”

Reminds me of a joke.

A grasshopper walks into a bar.

The bartender says, “Hey, we have a drink named after you!”

Hey, “Why does the New York Times refuse to report on the ongoing Palestinian incitement against Israel?”

Only leftists and Islamists are allowed to engage in hate speech and hate crime (it’s their primary form of speech and action).

But anti-Jew hate speech is kosher, I take it.

And I’m going to go out on a limb and say so is anti-Christian, anti-white-people, and/or anti-American hate speech.

Not a judge, Uncle. “Bill Killian, U.S. attorney for the Eastern District of Tennessee, said that inflammatory material against Islam might be a violation of federal civil rights laws. Such a violation could bring the federal government down on those opposing Islam here in the US.”

The brains of leftists are morally and cognitively impaired. They project their own hatred and motives onto others.

One example is exposed in this tweet by
David Burge @iowahawkblog:
“After accusing the GOP of treason and terrorist bombing, MSNBC welcomes special guest… Bill Ayers.”
@Morning_Joe #truestory

Timely. The “the Juice poisoned Arafat” story is back in the press once again:
http://www.france24.com/en/20131014-radiation-experts-confirm-polonium-arafat-clothing

But the former is far worse than the latter, because Westerners willing to ignore inconvenient facts or context are helping lend that particular line of propaganda an illusion of credibility.

The Old Gray Whore is run Israel-hating Jews who have a death wish.

The NY Times is the PR conduit for the communist hate factory at Harvard. Why would they report anything that hinders their horrible goals?