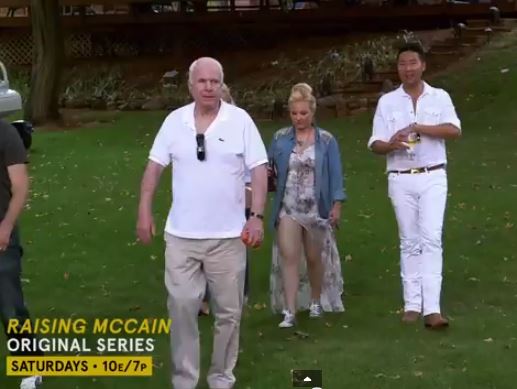 Meghan McCain says her Arizona senator dad is “depressed” and “frustrated” with the tea party faction of the Republican Party, which she called “the hyper-conservative wing.”

The comments were part of Meghan’s promo for her new show, which no one will watch, Raising McCain.

As a Tea Party activist, I am all for making both McCains even more frustrated.

One of the most important developments in the new conservative movement has been encouraging regular Americans to participate directly in politics.

In California, that has meant many have gotten involved in local Republican groups and have become versed in the ways of state party politics and its Byzantine rules.

On Canto Talk, I recently had a chance to interview its founder Randall Jordan, as well as California Tea Party coordinator Dawn Wildman.  The caucus recently participated in the California Republican convention in Anaheim; Jordan says they met with “100 % more success” than they were anticipating and now the GOP establishment “can’t ignore us and knows we are not going away.”

(If audio doesn’t load, you can listen here)

Wildman expands on the point, describing the level of enthusiasm she saw for the caucus at the convention:

“The was the hottest ticket of the weekend. And, the most interesting part of it was that it was 100% unadulterated tea party all the way and there was nothing the establishment could do about it.”

Jordan noted that another success was the passage of 4 of the 5 resolutions that the caucus introduced in Anaheim. These resolutions were:

According to Jordan, the establishment “took the teeth” out of some of these introduced resolutions. However, the Tea Party members now “know how to play the game” and plan to come back with even stronger resolutions at the next convention.

Additionally, the Tea Party California Caucus is looking to 2014  with an eye toward local elections:

“We are going to focus on local races, going for service districts, school boards, city council seats, in order to get as many tea party members elected as possible,” said Jordan.

Finally, I wrapped it up by noting that the Tea Party has been entirely vindicated in its stance about Obamacare, if the complete failure of the roll-out is any indication.  Jordan notes that his group spent only $5000 on their website and it is entirely functional.

The caucus plans on meeting in November to make even more plans.

Yes! Based on what I see on a lot of sites, many conservatives couldn’t be bothered to vote in order to throw Obama out….maybe we can get them to the polls by telling them it will upset and depress John McCain.

Since they dislike RINOs more than they do Dems.

RINOs like McCain have convinced themselves that tea party thinking is a ‘faction.’ They keep calling Americans ‘extreme’ & far right-wing both of which is not true.

Fact is, they have given up and accepted socialism as the new middle. I will never accept that.

How is disliking TEA Party folks more than Democrats superior for the RINOs? McCain would rather have dinner with Harry Reid than support Ted Cruz.

The Democrats march in lock step on every issue. When the leaders of the GOP are marching with them, I see blind loyalty at that point to be repulsive.

We have blown too many opportunities to fight the President’s “transformation” of this republic. Going along to get along doesn’t cut it anymore.

People stayed home because the choice was between a O and a RINO known for caving in one year and O and O lite the next time.

How’s that working out for ya so far, Zippy?

What evidence is there that a lack of conservative turnout had any effect on who won the election? The answer: none.

And don’t try the “Well, they may have voted but they didn’t volunteer and contribute” dodge, because there’s no evidence for that either.

So take your McCain-licking, conservative-bashing nonsense some place where people are stupid enough to buy it.

Do your own research. If white voters with incomes under $100K had turned out in the same percentage they did in 2004, Romney wins. Look it up.

McCain’s bubble has been burst. Mr ‘I’ve been elected 8 times so I am doing it right’ has been given a wake up call: He will not serve a 9th term. That message was delivered to him face-to-face in a town hall meeting this week. The coup de gras was was delivered by a very determined tea party thinking Veteran who accused him face to face of treason and listed the articles.

I voted for McCain the first time he ran for senate.

What McCain fails to apprehend is that he was the successor to Barry Goldwater whom my Arizona family dearly loved and proudly for voted for time and time again.

McCain has completely forgotten that he won because those of us who passionately subscribed to the notion that the defense of liberty is no vice, that repealing laws was the right thing to do, and that tyranny need to be depowered.

Come to think of it, to honor Barry Goldwater, that ought to be our new slogan. Not defund, but this …

Depower Obamacare! Or, Depower the government!

“…and there was nothing the estabishment [sic] could do about it.”

When you see hubris you can be sure that nemesis is not far behind. There are any number of things the establishment can do. Plant some jerk who’ll unfurl a Confederate battle flag when the TV cameras happen to be pointed his way, f’rinstance. Even better, an NSDAP Party flag. Voilà, another fake meme for the rubes.

That’s why people need to record everything. Guys that do that need to be identified and characterized. Are they really leftist plants? Or just some fringe nut trying to get attention.

there have been a couple instances of leftists masking as tea party I think. Whenever those guys show up, someone should casually approach them and get their story on video, in a friendly way, and get their name too.

We are in a war with leftists, and if they put spies in our “uniform”, we can/should shoot them … with video. 🙂

Rantbot: I respectfully suggest you listen to the show, if you think that is hubris. In truth, it is justified pride in outlasting, outwitting, and outplaying everything that the elite Republicans have tossed at the California Tea Party within the local organizations.

BTW – I have attended dozens of Tea Party events, and the only embarrassing antics I have witnessed have come from progressive plants.

Hobbits and wacko-birds ARE very annoying to teh New Baronial Class.

We are learning how to do it GOOD AND HARD.

McCain is a DC insider, he knows the tea party represents the only threat to the ruling class, and their pillaging of America.

Meghan McCain has her own show? Who knew?

Given the looks of that dress, she has no friends either…

And her father thinks she’d do well as a presidential candidate, but I think she’s too old for class president.

The Republican Party has turned itself into the Democrat Party of FDR. The TEA Party folks can go to the county and state GOP conventions and get rules changed that would result in the party moving back to the right but the National Party convention Rules committee will revise them to nothing and they will be accepted by the assembled delegates by voice vote and ruled adopted by the chairman. Happened at the last GOP convention and those rules are still in force. The rules were used to deny the seating of entire slates of properly elected delegates to that convention. There are 163 people running the GOP and only a handful even want to hear from the TEA Party or conservatives.

None of those Tea Party delegates went to the right Universities or belonged to the right Frat/sorority. The Elite of both parties share a common upbringing and a common agenda, Control.

Let’s start calling people names! How about “McCain Republican*”? Consider those 23 House Republicans who were among the first to fold over 0bamaCare. Representative Mike Coffman of Aurora, Colorado, for example.

Hobbits are generally very sincere and hard working and earnest and down-to-earth folk. In fact, Hobbits saved the rest of the world from indescribable evil. Being called a Hobbit is a high compliment, and unfortunately I am unworthy of such praise. Dang. Maybe in some future time.

Professor has objected to a third party effort. What if the McCain Republicans, together with GOPE** members the Bush(league) family want to form a third party by kicking out the TEA Party*** members.

* Sort of like we had “Rockefeller Republicans” which meant they were rich socialists.

*** TEA is an acronym for “Taxed Enough Already”, which started under El Presidente George W. Bush, a reaally White guy. We are still being over taxed.

BS Meghan. You know as well as the rest of us your father as well as Romney were chosen to lose the elections. They both had potential so called birth problems like Obama.

Just think — if McCain wasn’t missing conservative street cred, he would never have picked Sarah for VP. So there’s that diamond in the manure pile for ya.

How tiring it is to have those whiny children of the political class out in the public eye, riding the coattails of a political parent who should have been out of office long ago. I would have preferred that the parent never had been in office so that the public would not have had to suffer from the policies of that individual. Meghan is stupid and her father is a sellout. We’re supposed to have a “representative” gov and it is high time that those in DC started acting like it. McCain is being held accountable and he doesn’t like it. I suggest that he retire.

I can’t even stand to look at McCain.

Can’t stand to look at pretty boy Marco ‘Amnesty’ Rubio any more either.

It is time the malevolent I mean maverick John McCain retire. He has spent 40 years in the DC echo chamber and has no clue about the problems facing ordinary Americans, problems he himself has helped to create. The national debt was about $1 trillion when he took office in 1983, $16 trillion later we are in much worse shape and his go along to get along way of doing business with Dems and media obviously hasn’t worked. Maverick my ass, he’s a bigger phony than any Democrat.

John McShame has been the hoar
of lobbyists since he was one of the Keating 5 and it does my heart good to see no favorable comments, on any blog, about this POS.

As a source of political and cultural information, Meghan McCain’s show will rank just below re-runs of Suzanne Somers’ 1980s informercial on the Thigh-Master™ – which, she should note, may still be available and useful to her.

Is daddy’s little girl upset because the voters are about to end the gravy train? Hmm….

I think McCain means well, that is, comes by his beliefs honestly, if misguidedly, but I don’t understand why he ever considered himself conservative or why he went with the GOP. He’s the consummate centrist, hawkish Democrat of the 60s and 70s. He’s no George McGovern, but he’s nine tenths of a Hubert Humphrey and every bit of an LBJ or JFK.

Who, is that harpy in that totally ugly pair of shorts with the tail on it?

McCain suffers from as “Congressional Stockholm Syndrome”, a debilitating condition afflicting those politicians who “served” far beyond their usefulness in Congress, and have assimilated into the DC political culture.

The Vietnamese had nothing on the sweet enticements of a Congressional career.