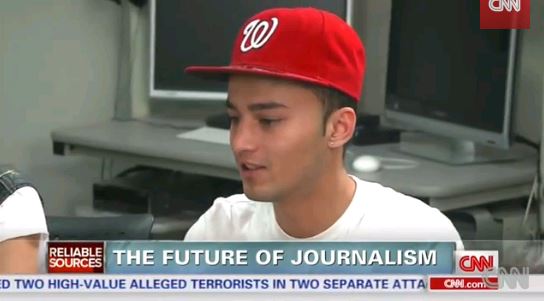 Washington, DC is a tiny island in a vast sea of other people's money. The natives enjoy its bounty and think it'll last forever.

Watch MSNBC all day long and keep in mind that, for the vast majority of the reporters covering politics in Washington, MSNBC is the Gospel Truth. Realize that the ambitious younger journalists in the White House press corps dream of the day when they’ll have their own regular spot on MSNBC or, perhaps, they will be appointed to a job in the Obama administration itself, like their hero and mentor, Jay Carney.

All of these reporters are Democrats. They hate and despise Republicans, and consider it their most important duty as journalists to help elect more Democrats and then to help the Democrats to advance their political and legislative agenda. To these reporters, the superiority of the Democrats is an objective fact, and anyone who says a word in favor of Republicans is therefore a liar or a fool or both….

Was it “unbelievable” that Obama faced no tough questions at the press conference? It would have been unbelievable if he had.

You made me sick with number 3.

That video of those college students really SUCKED!!!! A total waste of time to watch. Thanks so much LI. (Sarcasm on full)

The very concept of Colbert infuriates me. Every damned day, the guy plays a fake character who spouts off what he thinks right-wing people think. That makes him a daily straw-man argument.

The death of the legacy media will occur when all of the anchors and reporters from the hey-day of the 80s and 90s are retired or dead. I can’t imagine the American electorate tuning in es mass to watch ABC, CBS, NBC, MSNBC, and/or CNN when the current B- and C-stringers (they are certainly not the A-list) headlining their programs. Who in the right mind is going to watch those vapid people read teleprompters?

Do I have to watch the video?

I guess Common Core is just a mere formality.

The mindset of who “they” and “them” are is so ingrained, they never thought twice of what they were saying…all while being “objective”.

Our goose is cooked. Yet, not only do we allow this, day in, day out, but we pay for it.

Tell me again how we are not the stupidest country to ever exist?

At least in the USSR and China, they made you think this way at the end of a Kalashnikov.

Just FYI, Rush had a caller today who said that he had a relative in that class. There were LOTS of kids who listed FOX as a news source.

Do you mean, they cherry picked which students to interview. Astonished they all said WaPo, NYT, etc., in lockstep.

Makes me want to add them to my Twitter following list. Send them some items to wake them up.

The one fellow was toxic: don’t even cover them, because the supreme court has ruled Obamacare’s constitutional, so saying it’s unconstitutional makes him an unworthy liar. Shockingly naive. At least the other fellow retorted.

Thanks for that vid.

How many of the students will ever find jobs in journalism? The profession has been shrinking for some time. Unless one has connections inside media outlets jobs are scarce. If you do find a job the pay at the entry level is a pittance compared to the cost of acquiring the credentials one is expected to have. While the people at the top are grossly over paid the odds of getting to the top as vanishingly small.

There is a reason these students seem less then bright, If they were bright they would realize the will get no return on the investment in their education,

heaven help us. three minutes in that video, one of those kids is like, you can’t say Obamacare is unconstitutional. The Supreme Court says it is.

see that? see how the education system has been the key to Democrat power? because if the dudes in black robes says it’s kosher, then kosher it is.

Here’s an article on the status of current legal challenges to Obamacare, including the update that the Pacific Legal Foundation’s suit based on the principle you mention — violation of the Origination Clause — was dismissed by the D.C. district court and has been appealed.

I’m wondering if arguing the tax (penalty) is akin to a poll tax would make it unconstitutional. I can think of no other tax that is assessed for merely residing in the US.

I see that argument about the Supreme Court and the ACA all the time. One way to answer it is: “Citizens United.”

How many Democrats are satisfied that McCain-Feingold is objectively, metaphysically unconstitutional, end of story, because a few judges with life tenure and inescapable personal biases said so? A cursory web search brings up someone describing Citizens United as “arrogant, uninformed, naïve.” But … but … it’s what the Supremest of courts ruled!

I think you mean that SCOTUS held McCain-Feingold constitutional. Perhaps those journalism students should learn of the trumped-up wave of ‘public demand’ for campaign finance reform, financed by Pew Foundation funding, that the journalists of its time leveraged into that wretched Bill.

Oops, I replied before I noticed that you mentioned Citizens United. Well, it’s the obvious counterargument.

None of these students “think” about anything, but they “feel” about them.

All of them, at the prodding of Sesno, talked about how they’d handle the federal government. Journalists coming out of college SHOULD be learning how to find news on their own. All of them talked about getting news from someone else.

I didn’t hear one of them talk about holding the President accountable for anything. They’ll make it far with that attitude…unless a Republican gets into the White House.

Oh, and for the guy who wouldn’t cover Sen. Cruz, Slavery was once validated by the Supreme Court and was the law of the land. And the Constitution kind of wants Congress to be part of making and rejecting laws.

Journalism schooling will prep them to read script off a news feed at some small town. They need to go start a business, get involved in politics, study our history. Maybe visit oppressed lands, read books about people that escaped … then in twenty years, maybe if they switch into journalism they will be able to comprehend where the story is.

Sadly they have no clue that Cruz knows the constitution and has argued in the Supreme Court, whereas Obama constantly rejects our constitution, and doesn’t even attempt to argue law.

I was a little surprised to learn from a July 2012 NY Times article:

“Mr. Cruz, who has never held elective office, has argued before the Supreme Court nine times, more than any practicing lawyer in Texas or any current member of Congress.”

Stop that… be realistic. You and I both know that only the pretty and hunky-looking ones will ever get to read the news on TV. Some people have, “a face made for radio”.

The rest will become bitter crusading “journalists” forever looking for the man-bites-dog story that will land them a nice NGO PR job or, better yet, on a money-losing big city fishwrap, where they will do the bidding of Soros & Self.

The rest? They will ask you if you are interested in the Manager’s Special of the day, and then using all that fine journalistic training, they will creatively describe the blackened deadfish, teasingly smothered in a hand-crafted, Old-World style Bearnaise sauce, evocative of misty Spanish mornings along the Costa del Sol….

I watched until I got fed up with the babblers. None of them seemed to think going out there, feet to pavement, digging around, was the way to get stories. Nobody was abut discovery. Everybody was about parroting what’s out there. News for this “give me everything” generation. They won’t work for it. Like today’s LSM, they will make news of what their “betters” tell them is newsworthy. Goodbye free press because the press no longer THINKS.

I noticed your reference to the “LSM”. I trust you are referring to the “Lickspittle Media”

It appears that all or most of his students simply flit around the internet for anecdotes, watch Colbert and Jon Stewart for attitude reinforcement, follow the party line at NYT and WaPo and NPR, and feel that public figures of differing opinions should be deprived by reporters of any connection with the public.

They don’t appear to hold any curiosity nor respect for the aims and opinions of those who are challenging the White House and Congressional Democrats – despite that they represent the voted wishes of nearly half the country.

It looks strongly that that professor has not been doing his job as a classic liberal would construe it. Herd mentality rules this class, rather than an educated attempt to learn of, and understand and respect, the diverse threads of principles and opinions among the population and its representatives.

I worked for a newspaper for a few years (not in news). Like these students, most of the folks in the newsroom got their own info from the approved sources (NYT, CNN and NPR being the most important).

Also like the students, they had no idea that they were leftists. They thought they were centrists, part of the reasonable and common sense middle.

If the news industry in this country survives (it is currently shrinking), these students will have long and lucrative careers shilling for the democrat national committee and never know that they are part of the problem.

The more likely scenario is that most of them will leave journalism rather than starve. They will find reality to be quite different than they had believed. This will convince them that there is something desperately wrong with reality.

The US slowly morphs into the Soviet Union.

Even in the Soviet Union’s darkest days, Politburo members had it soft. Corrupt members of Congress know this.

This is part of the problem.

“In the midst of a national crisis, the GOP isn’t making its case to the public.”

Of course, the Progressive “media” will pull the old reverse racism thingy, “sell out”, “oreo”, go the ‘old man’, ‘dementia’ OR, ‘see, one of their own says THEY are stupid’.

The main stream media would be completely different if all journalism and English majors were required to take three upper division math classes in order to graduate.

Failing that, journalism schools should at least add a course on how to make french fries, deliver pizzas, pour coffee, etc.

Did anyone hear anything that surprised them? I sure didn’t.