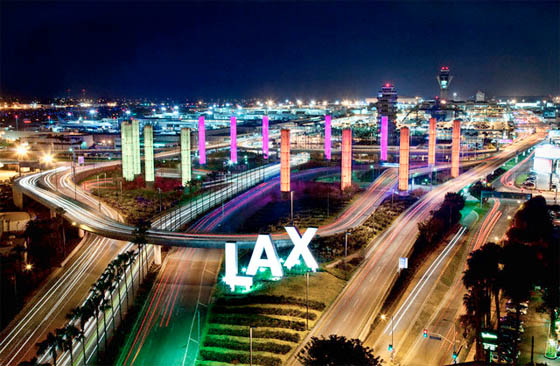 Police say a Los Angeles airport ground service employee who was arrested after several dry ice bombs were found at the airport Sunday and Monday left the devices as a prank.

The ground service employee arrested in connection with a string of dry ice bombs found at Los Angeles International Airport was a prankster who had no deep motive for his alleged acts, an LAPD official said.

But Dicarlo Bennett, 28, is still expected to face serious charges because the devices were found in close proximity to an aircraft, said Los Angeles police Deputy Chief Michael Downing, who oversees the department’s counterterrorism and special operations bureau.

“He was a prankster,” Downing said. “He thought it was funny. There is no terrorism here. This is one man involved who made very poor choices. There is nothing funny about what he did.”

Bennett, a 28-year-old man who worked for LAX ground-service provider Servisair, was arrested in Paramount on Tuesday on suspicion of possessing and exploding a “destructive device near an aircraft,” the LAPD said. He was held on $1-million bail.

The proximity of the dry ice bombs to the aircraft will likely rachet up the charges Bennett could face, Downing said.

Downing also said that while the suspect thought it was funny, he “had no intent to attack innocent victims. There was no political motive or agenda,” according to CNN, adding, “But I think he was surprised because now he is in jail on a million dollars bail. But this is serious. And when you place a destructive device near an airplane, it bumps up the seriousness.”

A 20-ounce plastic bottle filled with dry ice exploded in an LAX airport terminal employee restroom Sunday.  Operations were temporarily suspended as the LAPD bomb squad investigated the scene.  Another device was found by an airport employee the following day on a tarmac; the device was fizzing but had not yet exploded.  That employee told police he’d earlier cleaned up a similar device that had exploded in the same area, according to the LA Times.

An explosives expert explained that such devices aren’t technically a “bomb,” according to the Times.

Paul Worsey, an explosives expert and professor at the Missouri University of Science and Technology, said it was unlikely a dry-ice device would do much damage.

“They’re really not a bomb, just a noise generator,” Worsey said. “It wouldn’t really be effective.”

But police said they weren’t taking any chances. An exploding dry-ice bomb could potentially cause “significant injury” to people nearby, Chow said.

But an official with the LAPD’s counterterrorism bureau said the devices could exert a good deal of force, and officials had been concerned about the location of one of the devices that were found, given its proximity to aircraft.

“Even though they’re soda bottles, the pressure that’s created inside of them is extreme,” Cmdr. Blake Chow of the Los Angeles Police Department’s counterterrorism bureau said Tuesday.

“It actually can blow up with as much force as a pipe bomb, so that’s why we take these very seriously,” he said.

Servisair confirmed that Bennett “was an employee of [the company] at the time of the incident,” according to the LA Times.  The company offered no further information according to the Times, other than it is cooperating with authorities.

If this “bomb” had been made with glass bottles or jars the way they were made while I was a kid, I might have been concerned. The fact is that these type of things are made by kids and adults on a daily basis nationwide. I’ve never seen or heard of anyone that has been hurt by one or anything damaged by one except for the bottle.

The ones we made as kids though tended to embed glass in walls and trees.

Dry Ice is frozen Cabon Dioxide. Sounds like a Chemical Weapon to me!

Chemical weapon or a weapon of mass amusement.

Or a fire extinguisher.

Fire him because he’s an idiot: criminal prosecution would be abusive and overkill.

if done on an aircraft the inspections alone would have cost tons and put the a/c down a good many days/weeks. would need multiple NDT (dye-pen,magnaflux,etc) done as well as massive amounts of corrosion prevention procedures.
lucky hes not in more trouble.

Doesn’t the ATFE get involved with this type of explosive device?

Did Mr. Prankster, never hear of the term, Stupid Bastard?

Put it in his pants.

At normal atmospheric pressure the force generated by sublimating dry ice is minimal.

Had one of these devices gotten into an unpressurized cargo compartment the results at altitude could have been significant.

Back in high school a friend of mine thought it would be funny to fire off a CO2 fire extinguisher knowing that it would not create a mess like a dry chemical one would.

It was funny, until he found out that tampering with a fire safety device is a felony in the State of Florida.

That’s a lesson that lasts a lifetime.

The container suffers a catastrophic failure due to the pressure differential, not the absolute pressure, so the damage done should be the same no matter where it goes off.

on some blowing the cargo fire bottle(s) (iirc key was plural) reqs pressure bulkhead inspections due to the differential.
forget specifics now but blown at sea level was just normal inspection while 30k and up (if unpressurized) req’d it IIRC.

This is not just a silly prank. This is an expensive terrorist-assisting simulation which benefits the jihadis war against us. Think of how much resources (money, manpower, and time) were wasted because this jackass wanted to indulge himself in this bit of jackassery.

The terrorists have devoted themselves to making us spend money on low cost one-man acts such as this because their intention is to ruin us economically. What this guy did was a terrorist assist.

So, they should throw the book at him, jail him, and lose the key. Let’s see if he likes that “prank”. A**hole!