No, not the gubmint.

Starting about 4 a.m. Eastern on Monday. If all goes according to plan, the outage will be short and in any event, over no later than 8 a.m.

If all doesn’t go according to plan, can you say “healthcare.gov”?

This also is a good excuse to point out that for a while Legal Insurrection has been in the Top 10 of Politics blogs as rated by Technorati based on the mysterious “authority” algorithm.

It’s volatile, and we could drop like a stone tomorrow, but as of this moment in time, we’re number 8 in Politics: 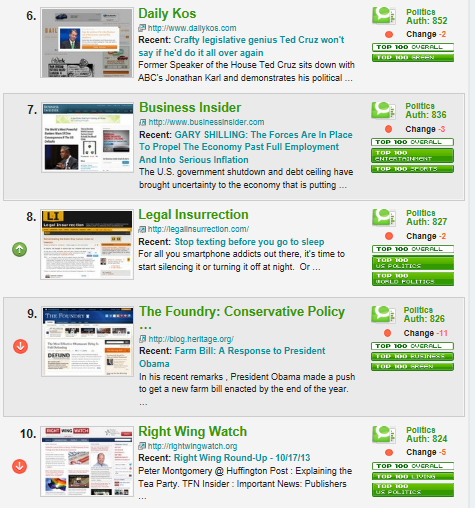 This does seem to indicate that we have an impact far beyond our rather modest blog traffic.  Hopefully that will not change after the “maintenance” change on Monday.

It’s “partial” for damn sure. Toss out Breaking News and the top 5, Lefties.

Ignorance is bliss I guess, but the mental diseased Left, sure damages our nation.

It will be a happy day when traffic here surpasses Daily POS. Oh, I meant KOS 😉

I send my FB friends here, and have tweeted a few times, so surely that accounts for at least ten people. 🙂

The insertion of a right idea into the global dialogue, can make waves far beyond the rock cast into the waters.

Links to this blog seem to pop up all over the place. I even see people link here from Pinterest, which I had thought was mostly recipes, arts & crafts and cute puppies! But I still see “pins” with some of the “empty chair” user photos the Professor posted, and the Branco cartoons, of course, and the bumper sticker posts. Right between the wiener dogs with glasses and the shrimp taco recipes 🙂

So it’s kind of everywhere, this blog!

Look forward to the new look and functionality..

It better not have a new look. Prof said maintenance, not makeover.

Just one thing somewhere needs to be satisfied with working properly, eschewing this widespread insane urge to “upgrade” for no reason. This blog seems like the best entry in the category of “things that perform properly.”

Its obvious that the good professor is a bomb-vested, tea-party extremist, intent on holding us hostage to this threat of an il-legal-insurrection shut-down.

Does he not care about the real hardship his recklessness will cause?

If Legal Insurrection be hardship, make the most of it.

Huh? Why, for goodness sake? Everything seems to be working well now,!

Except for maybe what the &%$#@ happened to the “stars” rating?

Did I miss out on the global announcement bot the “stars?” Oh well, even programmers got to earn a living, shucks! 🙂

No wonder we can’t win elections.

It is my understanding on good authority that all the important people read LI. 🙂

Where is National Review Online? I guess Instapundit is part of PJMedia now, or surely it would be on the list. What about Ricochet? PowerLine? IowaHawk just tweets these days, I guess. Still, something seems fishy about this list to me.

So, the site has reached its processing limit, and it must be shut down before it is increased. I am sure the timing is just a coincidence. Right, Professor Ego… I mean Jacobson?