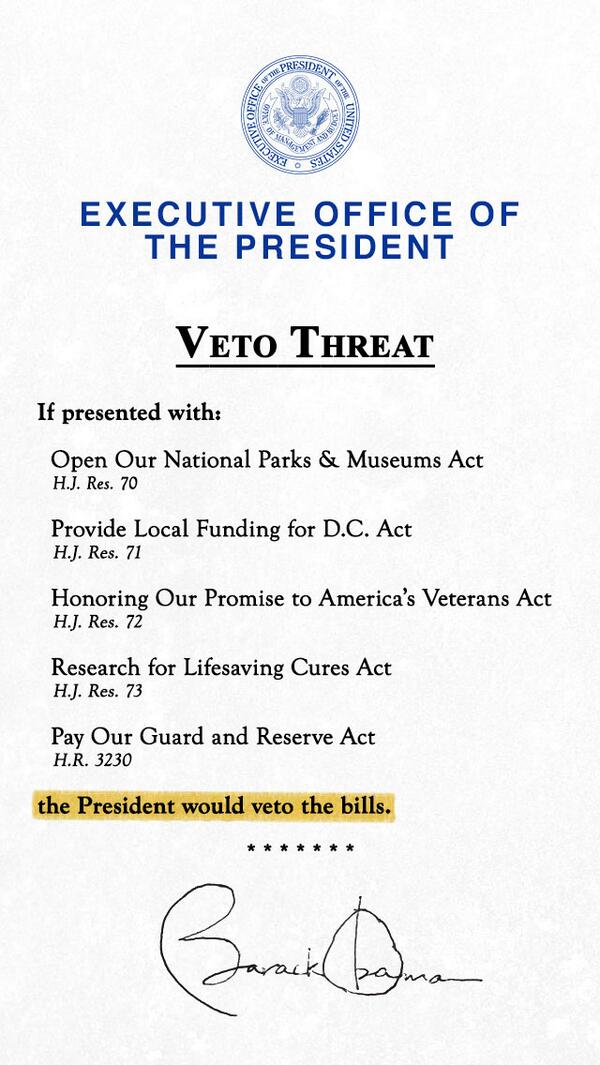 The reports are coming in of incredibly petty shut downs beyond the WWII Memorial and Lincoln Memorial.

Newt Gingrich posted this image (h/t Twitchy) of a bus turnaround shut down at Mount Vernon:

They shut down the bus turnaround even though Mount Vernon is OPEN:

Here’s another example that was shared earlier today:

Claude Moore Colonial Farm is a living history farm in Virginia that provides visitors the opportunity to experience life as it was in 1771.  That experience comes complete with costumed interpreters and authentic recreations of tools, buildings, and everything else just as it was in that point in time.  The Farm is also economically self-sustaining, having been cut from the National Park Service’s budget in 1980.

But that hasn’t stopped the agency from shutting down Claude Moore Colonial Farm, despite the fact that the Farm is fully staffed on its own and prepared to open today.

In an email sent to supporters, the Farm’s Managing Director Anna Eberly wrote:

For the first time in 40 years, the National Park Service (NPS) has finally succeeded in closing the Farm down to the public. In previous budget dramas, the Farm has always been exempted since the NPS provides no staff or resources to operate the Farm. We weren’t even informed of this until mid-day Monday in spite of their managers having our email addresses and cell numbers.

The first casualty of this arbitrary action was the McLean Chamber of Commerce who were having a large annual event at the Pavilions on Tuesday evening. The NPS sent the Park Police over to remove the Pavilions staff and Chamber volunteers from the property while they were trying to set up for their event. Fortunately, the Chamber has friends and they were able to move to another location and salvage what was left of their party. You do have to wonder about the wisdom of an organization that would use staff they don’t have the money to pay to evict visitors from a park site that operates without costing them any money.

Responding to claims in a Washington Post story from a Park Service spokeswoman who said, “The monuments are closed because, during a shutdown, there is no money to pay the rangers who staff them,” Eberly called the excuse “utter crap.”

What utter crap. We have operated the Farm successfully for 32 years after the NPS cut the Farm from its budget in 1980 and are fully staffed and prepared to open today. But there are barricades at the Pavilions and entrance to the Farm. And if you were to park on the grass and visit on your own, you run the risk of being arrested. Of course, that will cost the NPS staff salaries to police the Farm against intruders while leaving it open will cost them nothing.

The Farm’s Board of Directors has apparently made appeals to the Park Service to keep the Farm open, only to be denied.  “They feel that as “landlord” they have absolute control of their property,” Eberly wrote.

She went on to emphasize the Farm’s independent and entrepreneurial spirit that has kept it running for so long.

One reason that citizens worked so hard to save the Farm in 1980-81was partly because the NPS tried so hard to get rid of it. But what really saved the Farm were the individuals and families with children and who had visited, participated in programs and volunteered. Even when the Farm was operated by the NPS (1972-1981), it had a very independent and entrepreneurial spirit which attracted like minded people. After all these years, we still believe that if we are willing to work hard enough, there is nothing that we cannot accomplish. And now there are a lot more of us who feel that way than in 1980.

Eberly concluded the email with an unsettling observation.

In all the years I have worked with the National Park Service, first as a volunteer for 6 years in Richmond where I grew up, then as an NPS employee at the for 8 very long years and now enjoyably as managing director for the last 32 years – I have never worked with a more arrogant, arbitrary and vindictive group representing the NPS.

In the end, a shutdown that probably shouldn’t even apply to the Claude Moore Colonial Farm may now affect its ability to earn income to operate it.

Barack Obama, and Harry Reid are both small, petty men.

They are worse than children throwing a tantrum.

How does any sane person expect to negotiate with a spoiled, tantrum throwing child?

Hope and Change has a strictly vindictive character. Who knew.

Anybody who has ever watched Chicago politicians in action.

Time for someone in the area to walk out and move the barriers. Take them down and stack them neatly on the side of the road.

What should concern everyone is that this, like the IRS abuse of power, likely didn’t come from the White House. This abuse probably came from one of the myriad of bureaucrats looking to punish the people who dare to think of federal workers as public servants, just as the decisions to use the IRS to punish anyone who didn’t support more and larger government.

Fire them all and replace them with volunteers.

Museums do that all the time.

Yeah, you keep telling yourself that. Beloved leader had nothing to do with it….didn’t even know about it until he read it in the newspapers, right?

The National Park Service has already admitted that the orders came from the White House.

In all the places I have worked – both private sector and public – over the past 45 years, when undesirable actions were widespread within an organization (discrimination, sexual harassment, corruption, to name a few examples) it was always looked at primarily as a problem of leadership and management. The person(s) in charge set the tone, as well as the standards of conduct, for their subordinates.

Even our government seemed to hold to that pattern as recently as 5 years ago. But not anymore. Now it’s, “…likely didn’t come from the White House.” or “The President didn’t have anything to do with this, it was…”.

Smoking guns are nice to find, if you’re looking to prosecute a crime. But judging the competence and ethics of the leader(s) of what just might be the largest employer in the United States – the Executive Branch and its associated agencies – does not require a smoking gun. We can judge from what the organization and its employees do. We can further judge from the actions taken by leadership when misconduct or perceived misconduct occurs. Is corrective action swift and certain? Or is the reaction of leadership to smirk and look the other way?

In my view, this current administration presides over a house in disorder. The employees of the IRS, the NPS, the EPA, and others feel empowered to abuse. And so they do. Over and over again, more blatantly each time they get away with it.

The solution, from what I have seen over the decades, always involves one basic action: remove the ineffective, non-compliant leadership. Replace the failed leaders with strong, ethical leaders who are chartered to clean house and restore integrity. Short of that, its like asking prison inmates to design a rehabilitation program. Good luck if that’s your plan.

What’s next – The Alamo?

The Alamo is controlled by the Daughters of the Republic of Texas, NOT the feds or the State of Texas

It’s OCCUPY without the groovy drum circles and funny up and down “twinkles.”

It’s OCCUPY … except they’re crapping on WWII veterans instead of police cars this time.

There’s a lesson here the GOP should loudly and frequently point out. Only government funded entities are shutting down, not privately run and funded entities. If you want reliable services, private is the way to go.

Also, the irony of spending more for political shut downs than for normal operations should escape no one.

Just make sure it doesn’t rent from the government. They shut down a self sustaining living history farm that hasn’t been funded by federal money since 1980. They even evicted the local Chamber of Commerce that was preparing to have an event at the farm.

It would seem to be completely private

GOP Fashionista ‏@GOPfashionista
Remember when Occupy movement had Obama’s support & were allowed to set up camps all across country for weeks but no #WWIIMemorial for Vets.

More armed guards ‘defending’ the WWII Memorial than defended the Consulate in Benghazi.

Take a look at the photograph in this post
Obama’s America… pic.twitter.com/P38BDsne5d

You’ll have to copy and paste the link and then scroll down.

Can we get a graphic of that?

I love the smell of WWII Vets storming a barricaded and heavily defended #WWIIMemorial in the morning. It smells … it smells like victory.

Should this really be a surprise? Anyone who has watched/listened/read about Obama and Reid, etc. have known these are small, petty, angry bullies who use the most unethical, underhanded tactics to get what they want. I want to believe that this will finally show the American people who these people are but my greater fear is that the combination of people who support these tactics plus the people who don’t care will prevent any meaningful change to occur.

My opinion is that it’s time for Americans to engage in polite respectful and constructive civil disobedience. The Public Parks are an ideal place to take a stand, especially those that are privately operated and funded. Take down the barriers, operate the parks, have your press kits prepared and the cameras running – force the Administration to order a confrontation with peaceful Americans. I suspect more of these situations will end like the park rangers who stood aside for the WWII Vets.