I guess this goes in either the “there he goes again” or “chutzpah” files.

Tropical Storm Karen is expected to make landfall later this week in the Gulf of Mexico.  FEMA started recalling workers several days ago to prepare for the storm, and in any event, most FEMA staff never even were furloughed:

It’s unclear how many FEMA employees are being called into work. Most FEMA employees — 11,468 of the 14,729 at the agency — were declared “excepted” and were supposed to stay at work during the government shutdown, according to the DHS contingency plan.

Yet today Obama made a visit to FEMA headquarters in Washington, D.C. and issued a statement criticizing Republicans for the lack of FEMA funding.  Obama demanded a vote on a full “clean” Continuing Resolution:

On Friday, however, the House passed funding for FEMA over the strenuous objections of the vast majority of House Democrats (note, there were two more Yes votes than this screenshot captured: 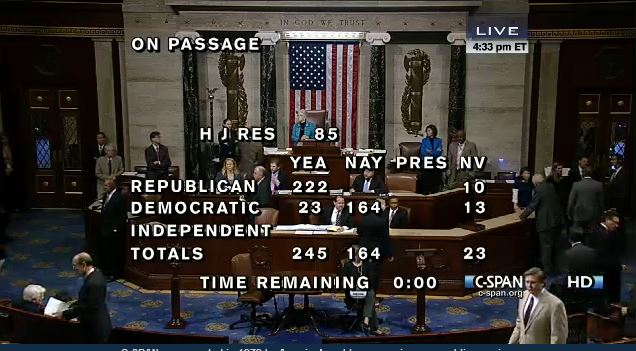 I have a call into Harry Reid’s office seeking his position on whether he will bring the FEMA bill to a vote, but thus far he has refused to allow individual funding bills to come to a vote, not even for NIH child cancer clinical trials.

Obama has threatened to veto the FEMA funding bill.

When the storm hits the Gulf coast, if FEMA does not have sufficient funding, there will be no one but Democrats to blame.

For The Won, it must be Excedrin Headache #247?

Illogic reigns at the Spite House

Especially since Karen is no longer. The storm was reduced to a remnant low on Saturday and is no longer being tracked.

But that’s our emperor… A few days late and a lot of money short!

The media loves to blame Republicans when Democrats screw up in the aftermath of hurricanes making landfall. This time nature refused to cooperate. There aren’t even severe thunderstorm, high tide or flash flood warnings anywhere on the Gulf Coast. Karen is now nothing more than a normal rain system.

Headache worsened by the quacking of a Lame Duck.

The amazing thing about this shutdown is that Obama is being marginalized BY HIS OWN PARTY! Harry Reid is telling him where to get off.

The Republicans at this point should be counterattacking with “Pass the House CR as it stands and we’ll immediately propose a bill funding the ACA in the House. Since you’re sure that would pass, how can you lose? End the shutdown today and fund the ACA tomorrow – literally.”

Voting on ACA sounds like a Dem talking point to me, but here’s a thought: the House could vote to fund programs and agencies on a priority basis.
They could promise an eventual vote on ACA, as a new program which doesn’t go into effect for a few months, it is clearly of lower priority.
Once the Senate Dems and President show good faith and come to a conclusion on children’s cancer treatments, Veteran benefits, food banks, national parks and the rest, the House could take up ACA. Dems in the Senate, and Obama’s veto pen might vote up or down on cancer treatments and so on. The House might vote up or down on ObamaCare.

“When the storm hits the Gulf coast, if FEMA does not have sufficient funding, there will be no one but Democrats to LEGITIMATELY blame.”

FIFY. Alas, guess who will actually get blamed?

I imagine GW Bush will get the blame again. Maybe they can trot out Kanye West to tell the world that Bush doesn’t care about black people.

Simple response. FEMA shouldn’t be tied to politics, so tie FEMA funding to helping those out in Nashville who were not helped by Obama and FEMA when their town flooded.

Storm? What storm? Y’mean the mild low pressure system bringing moderate winds in the single digits and little bit of rain to the Gulf coast? Ha.

FEMA means nothing to people at large.

On the other hand, this “close down” is a rehearsal for the Feds. Doesn’t look like much. But they’re studying the headlines. To see if they can “draw Americans” to view a few things in terms of OMG. Instead of it all looking like a big waste.

The only people “caught” by the Feds are those who had planned vacations long ago. And, of all things, tour operators (who don’t give refunds), also need to think of where they can take people to “see stuff” not on Federal lands.

Then, of course, you have the shooting of a woman whose car was totally stopped. She had no gun. Just a one year old beside her in the car. Well? Wasn’t it easy to make her dead? Doesn’t it prove that too many cops gathered in one place “shoot like crazy?” Of course, the media cooked into the word “crazy.” And, said the driver was crazy.

What’s wrong with DC is not fixable. And, it involves BOTH PARTIES being in bed with lobbyists.

For Obama? “Hey, look! We’ve got headlines for you. And, it doesn’t involved overpriced insurance.”

What will it look like around Christmas Time IF we find lots of Americans avoiding buying this crap?

Did you know the Vietnamese war was a war that DRAFTED soldiers? That came to ruin the democratic convention, in 1968, held in Chicago that year.

To solve what’s going on now? Taking to “tweets” isn’t enough. People will have to massively demonstrate in the streets.

Nobody’s gonna do this for FEMA.

Obama said that he would administer with a scalpel, but since coming to office he has done nothing but hatchet jobs. Perhaps he only favors scalpels in the hands of abortionists for hire.

Reid is pro-choice, but he has demonstrated and stated his contempt for individual choice and the democratic process.

Pelosi demanded that we submit to learn the consequences of Obamacare. Democrats have an unsavory legacy of favoring involuntary exploitation.

Why do the vast majority of Democrats oppose planned government? Why do they oppose the right to choose?

Surely everyone has noticed this tragic irony.

Dismember it. Vacuum it. Flush it. The clump of burdensome and unwanted policies and regulations known as Obamacare. Not the clump of cells known as Barack, Harry, Nancy, etc.

Reid and Obama are loving this. They want some dead bodies as propaganda against the GOP. So I predict no FEMA funding bill will be considered by the Senate. I am sure that Landrieu and Nelson are loving the idea that their constituents are Reid’s human shields in this standoff.

Always presume that Obama and Reid are evil–your predictions will be correct more often.

Here’s a plea to any LIVerals that might wander through these comments…PLEASE VOW TO NEVER VOTE AGAIN!

In true Orwellian form, when Democrats say they want a “CLEAN” bill, they mean the one that has EVERYTHING in it, including all the shi* crap.

The House has been passing CLEAN bills, but Reid insists on a bill that includes the crap.

The only reason Reid won’t pass a budget, is they want to hide the crap in crisis management CRs. They must pass the clean bills, and run the sewage through a negotiating treatment plant. Voting on individual pieces makes it clear who is dirtying up the “clean funding”.

Adjunct to this, I really wish Republicans and conservative media would quit accepting the left’s Orwellian terminology. A clean bill is not clean when everything is mixed in.

A tax increase is not revenue, until it actually generates more revenue. As the Laffer curve shows, there is a point, after which tax increases DECREASE revenue. Yet constantly the term “tax increase” is senselessly replaced with “revenue”.

Affordable Care Act is an oxymoron, and tied to the Orwellian title should have been an escape clause that said if rates went up and plans were closed, it would be nullified. At the very least, it should have be required that the name would be changed to the “Unaffordable We Don’t Care Act”. Or the UFUA.

Instead of saying Obama has granted waivers or exemptions, the correct language is he has made an illegal attempt to change the law, in a lawless coup.

There are many more examples of the right drinking the kool-aid of language change. But at least we have “barrycades”, though that is wholly legit.

Excellent, excellent point!
It was high time for Repubs to fund gov’t outside of monstrous CRs and omnibus bills full of pork.

better question is why do so many depend on government for every storm?
maybe if money stayed in the states the people there could take care of themselves.

I. Had a peek at Karen a few days ago . Going nowhere I decided. Maybe some rain.

It took about 39 seconds & it would have been entirely free advice.

When are they going to finish up after hurricane Sandy?