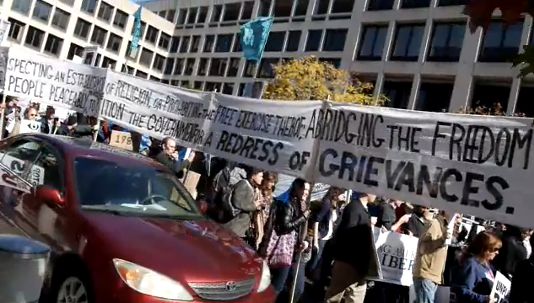 #StopWatchingUs, the Rally Against Mass Surveillance, kicked off Saturday morning in Washington DC and continues into the afternoon.  It’s been an interesting mix of demographics, with people there from both left and right.  The StopWatching.us coalition includes an equally (and oddly) diverse collection of organizations like the American Civil Liberties Union, FreePress, FreedomWorks, Competitive Enterprise Institute, Young Americans for Liberty, the Electronic Frontier Foundation and CAIR, among others.

Some of the speeches have been well-grounded and interesting, others amusing and light-hearted, and there have been some with a bit more fiery rhetoric, many with mostly left-leaning viewpoints.

You can watch the ongoing rally below, as well as view a collection of various photos, tweets and the hashtag feed. 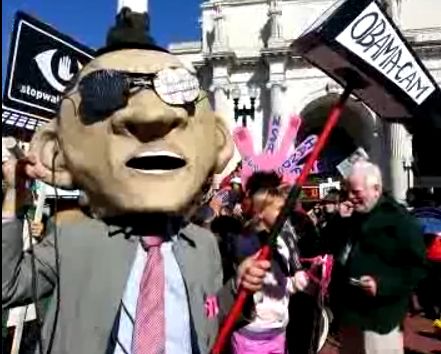 Rally in #DC today to call for end to mass surveillance by NSA. We're in! http://t.co/MNQo6Riw0o #StopWatchingUs pic.twitter.com/FhXjMheaOz

#StopWatchingUs Remember @BarackObama in 2007. He promised to protect you from mass surveillance. http://t.co/vtKTdNLxkB

#StopWatchingUs march in DC marching into sun on a beautifull day for freedom #NSA pic.twitter.com/eOFRu9w87k

They say wiretap, we say fight back! #StopWatchingUs

“The StopWatching.us coalition includes an equally (and oddly) diverse collection of organizations like the American Civil Liberties Union, FreePress, FreedomWorks, Competitive Enterprise Institute, Young Americans for Liberty, the Electronic Frontier Foundation and CAIR, among others.”

Obama was sold as a uniter, but I don’t think he meant to unite the left and right *against* him, lol. Obama is Reagan’s putative alien invader, the common enemy that unites all.

Seriously, what lunatic-left nut-job wouldn’t want BIG BROTHER FED GOVERNMENT watching them 7 x 24 ? The lunatic-left dolts really, really need BIG GOVERNMENT and its stooges in the leftist, biased corrupt socialist media to tell them what to wear, what to eat, what to think, what to drive, what to carry groceries in, what box to check in elections, what to drink, what to do every moment of every day….Otherwise, they would just endlessly spin around in circles until they collapsed into a hot steamy pile. Fact is, leftists are so dependent on BIG GOVERNMENT that the spying by the OBOZO regime is basically just like a BABY MONITOR for them.

The left is only irritated because they are being spied on too. If it was only the right being spied on there would be no problem. Where were these lovers of liberty when IRS was harassing the right?

Here’s an interesting question: If there’s ‘no reasonable expectation of privacy’ when in public, is there any reason why we couldn’t all be required to wear identification numbers in public?

NSA will stop once the obamacare website is up and running, which is really just one big collection and permissions granted by applicants to have any and all information they want on us to use any and all ways the government wants.

Ironic that many of these protesters have spent a high level of time and emotion into getting obamacare passed and implemented.