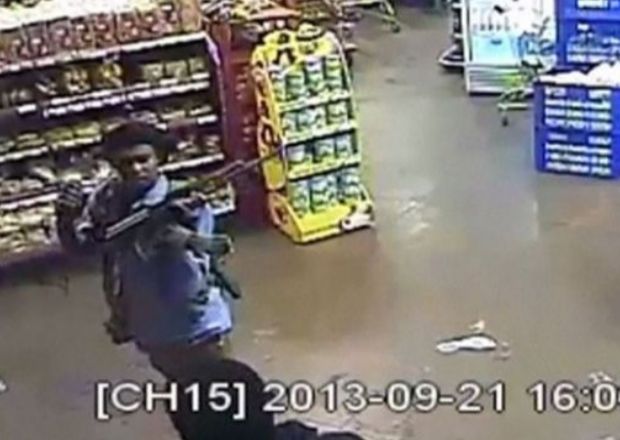 In the wake of the Westgate Mall attack in Nairobi, many have turned to the issue of security and a debate over how to protect against similar terrorist attacks on soft targets.

Interpol Secretary General Ronald Noble had some interesting comments for ABC News today in a post titled Exclusive: After Westgate, Interpol Chief Ponders ‘Armed Citizenry.’  The comments are likely to spur even more debate between proponents of gun control and 2nd amendment advocates.

Interpol Secretary General Ronald Noble said today the U.S. and the rest of the democratic world is at a security crossroads in the wake of last month’s deadly al-Shabab attack at a shopping mall in Nairobi, Kenya – and suggested an answer could be in arming civilians.

In an exclusive interview with ABC News, Noble said there are really only two choices for protecting open societies from attacks like the one on Westgate mall where so-called “soft targets” are hit: either create secure perimeters around the locations or allow civilians to carry their own guns to protect themselves.

“Societies have to think about how they’re going to approach the problem,” Noble said. “One is to say we want an armed citizenry; you can see the reason for that. Another is to say the enclaves are so secure that in order to get into the soft target you’re going to have to pass through extraordinary security.”

Speaking earlier to reporters, Noble emphasized the challenges that face law enforcement in this day and age, in an environment where terrorist groups are urging other smaller groups to strike soft targets.  “How do you protect soft targets? That’s really the challenge. You can’t have armed police forces everywhere,” he said.  He also talked about efforts to screen passports and trying to limit the movement of terrorists.

Noble, an American who previously oversaw several prominent law enforcement agencies, was rather forthright in his interview with ABC News.

“Ask yourself: If that was Denver, Col., if that was Texas, would those guys have been able to spend hours, days, shooting people randomly?” Noble said, referring to states with pro-gun traditions. “What I’m saying is it makes police around the world question their views on gun control. It makes citizens question their views on gun control. You have to ask yourself, ‘Is an armed citizenry more necessary now than it was in the past with an evolving threat of terrorism?’ This is something that has to be discussed.”

“For me it’s a profound question,” he continued. “People are quick to say ‘gun control, people shouldn’t be armed,’ etc., etc. I think they have to ask themselves: ‘Where would you have wanted to be? In a city where there was gun control and no citizens armed if you’re in a Westgate mall, or in a place like Denver or Texas?'”

‘Secure perimeters’ around every ‘soft target’ in an ‘open society?’

Oh, come on. The answer is so obvious!

The sign would actually mean Terrorist Free Fire Zone. There is much to be said for Texas style gun laws…if only they allowed open carry!

Actually, I prefer the concealed carry. Criminals never know who might be carrying and that’s a good thing..

Grumpy, Criminals aren’t that smart, though your point is well taken. At a CCW class for non-resident UT, AZ and FL permits last June, the hall was packed, and per the instructor, it’s been packed every class since last November. Young and old, black, white, asian, indian, hispanic – all there to get their CCW. With so much diversity, the only safe conclusion is to assume everyone is carrying.

At the range where I practice, the RSO is a 23-24 yo girl and often the woman who comes to shoot after me is in her mid 60’s, shoots with a pink air-weight S&W with impressive groupings at 10 yards.

That would help, especially if the laws allowed accidental exposure of a normally concealed weapon.

Off hand I see two everyday drawbacks to an open carry. First, idiots who like to mess with junk on my belt when I’m bent over, working on something. I can just see some of them grabbing my handgun, “Just teasing”. Someone that stupid should show up on the Darwin Awards list.

Second drawback is that some chairs hang up on anything on a belt. It’s a real nuisance having to unhook a chair.

Some will say the third drawback is that it would “freak the mundanes”. Heck with them.

There is nothing more convincing that an armed citizenry is much more secure than so many studies that confirm it.

“Gun control” isn’t about guns…it is about control. Always has been.

If someone wants your guns it means that they want a power over you that they didn’t have before. Be it criminal, terrorist or tyrant, the desire is the same.

Noble’s use of the term “mall” might not be quite on point. Depending on the state, even in states with liberal CHL/CCW laws, many public places are allowed to be gun-free of their own choice, or carriers are not allowed by law to carry.
For some reason, almost all of these forbidden zones are prime mass-shooting areas.

When it came to shooting straight & good

In addition / or is Retribution . Citizens can find out who these outlaws are & track down their familIRS & friends & destroy.

‘Where would you have wanted to be? In a city where there was gun control and no citizens armed if you’re in a Westgate mall, or in a place like Denver or Texas?’

Or, put another way, if you were going to attack someplace, would it be Chicago or Houston?

Think of the NFL not allowing armed off duty cops into stadiums. People will be sitting ducks for a group of terrorists cuz there’s no place to hide.

The NFL seems to be very PC conscious. Sports writers fancy themselves journalist and want to emulate what they think journalists are, so they are very PC. I thought the NFL was tough guys.

There was a report this week that one of the reasons the Kenyan police response was so slow was because some of the police were busy looting stores in the mall.

And we all remember the actions of many New Orleans police officers during hurricane Katrina.

But we bitter clingers should be willing to give up our guns and let Big Daddy Government protect us, right lefties? LOL.

The men on the spot who were not security and who had access to guns at the time did a great job getting other people out of the Mall. This reinforces the need for responsible armed citizenry.

For me it’s an easy one. A legally armed citizenry is not only the logical solution but the most socially healthy one. An armed and firearm-trained citizenry would completely change the mindset of terrorism, while the security apparatus and police-state bureacracy required to ensure “total security” is impracticable and inimical to a free people.

But our authoritarian masters will fight this idea. They would prefer thousands slaughtered then to accept a widely empowered citizenry.

I think there is more to this than the Kenyans would like to admit.

Some of those in the mall with guns were very much like ex special forces . The British started pixelating faces pretty quickly .

Go back to the 2007 elections when Odinga Muslim supporters ran riot & killed people . They seemed to know which element to eliminate here & there seems to be a non match for the number of terrorists to number of ‘arrested’ .

Whilst some were lying dead other people were seen sitting around casually on the outside balcony.

Maybe they were not AlShabbab but an armed insurgency mercenaries.

Sorry downticker. The SAS forces of the Commonwealth nations rotate through Kenya. Kenya is the jewel of Africa & They are not going to let it go to AlShabbab.

It is accepted Kenya had warnings .

“If that was Denver, Col.,… “
James Holmes, the Aurora Theater shooter, drove past several theaters to get to his target. The theater of choice was a target rich “gun free zone”.

“…either create secure perimeters around the locations or allow civilians to carry their own guns to protect themselves.”

Do ask, how did those terrorist get so many guns and munitions into the mall? They rented a shop, and brought the weaponry in using boxes, disguised as merchandise. Is security going to open every box of every tenant in the mall? I doubt it. Refusing to rent to Muslims isn’t going to work either. This was a simple evil idea. Carry in boxes of weapons and then start shooting. Just like the Fort Hood treachery, the best defense will be keeping people armed.

As a Viet Nam _era_ vet, the disarming of the military on bases predates even Viet Nam (although I understand that people in war zones were allowed/required to carry their duty weapon). I’d keep looking back in history.

Guns are regulated tightly; the political and media class are liberal; and foundations the height of getting-things-done, like push Coloradans to raise taxes $1 Billion to send 43% to Denver Schools. So you’d have to hope the security state that is the Metroplex (you didn’t think only eastern big cities got the military surplus, did you?), would come quickly.

Though, quite a few people are attending the Tanner Gun Shows, getting their CCW training, and the shooting ranges that have survived the assault on their restrictions are consistently full. And the citizens of this fair region have no problem running to danger.

Mr. Noble, I appreciate your honest presentation of a few key facts in the gun and the rights of citizens to protect their lives as they best see fit, regardless of the ruling class–or perhaps in spite of.

And the left will continue to find any reason, *any* reason, to avoid acting on such a conclusion. At *any* cost.

Keep up the good work!!!

Wonder why he is so quick to cite Colorado as his example? Seems to me that Kennesaw, GA would be a better example of the model to embrace.

Kennesaw GA didn’t get the kind of media coverage that the Denver shooting did.