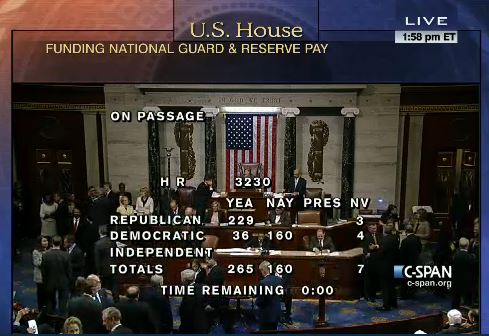 The House of Representatives will bring two funding bills to a vote today, H.R. 3230 – Pay Our Guard and Reserve Act, and H.J.Res. 72 – Honoring Our Promise to America’s Veterans Act (again).

The vote just concluded on the National Guard funding, and it passed, with 160 Democrats voting against it:

Update 4:50 p.m.,: The vote just concluded on the Veterans’ Benefits funding, and it passed, with 155 Democrats voting against it: 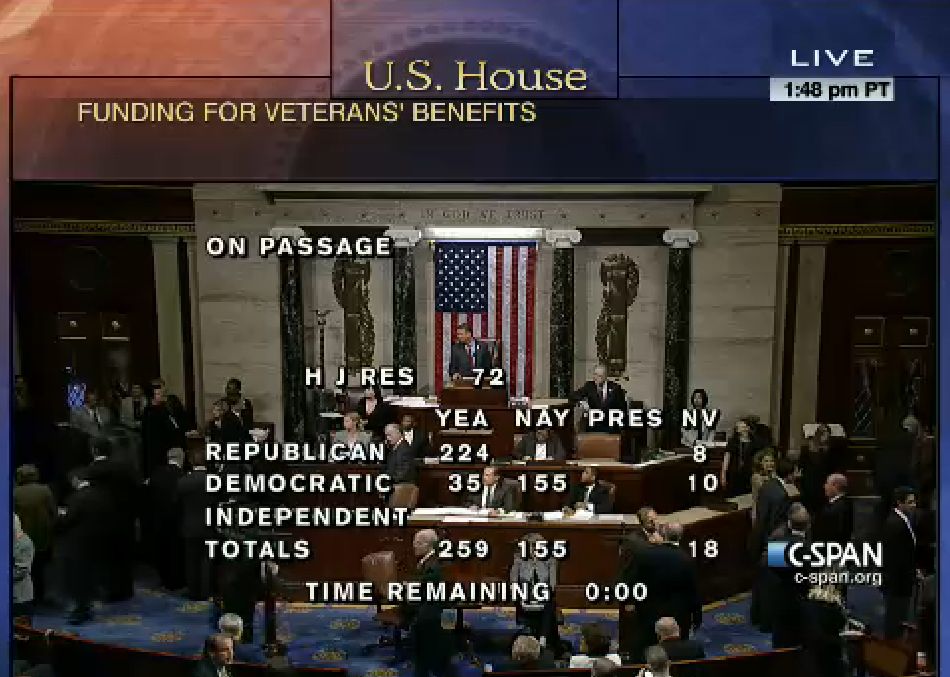 … and Reid just blocked it.

This is all Ted Cruz’s fault (sarc):

“To fund these piecemeal bills would give Ted Cruz a veto power over what is funded and what isn’t,” Schumer said. “We are not going along with that — how could we?”

Is it just me, or do we have 10 more Democrats voting in favor than with previous attempts? If so, then I would say we seem to have the stronger hand.

I think we’ll have to use this to beat Joe Courtney over the head with next year here in CT-02, if we can get a decent candidate to run against him. Nice little Democrat lapdog, voting the way the DNC tells him, rather than in the best interests of his constituents.

I’m getting fed up with this.

I’m especially fed up with those on the “right” that treat this as a political game, and do nothing to advance “facts”.

-because it contained increased taxes (the most in one Bill in history), the House of Representatives, controlled by Democrats, initiated and passed Obamacare.

-The Senate, which just became filibuster able thanks to the election of Scott Brown, used budget reconciliation to pass Obamacare because it was a tax

-The Supreme Court upheld the individual mandate, driver of Obamacare, because it was a tax

-Now, the republicans hold the House of Representatives, and hold the power to tax, or not to tax

They have chosen to delay the tax.

The Senate, and Executive should be begging, pleading, at the very least negotiating with the House if they want to continue this tax. Not, calling them terrorists and what not.

This power over the purse may, in fact, be regarded as the most complete and effectual weapon with which any constitution can arm the immediate representatives of the people, for obtaining a redress of every grievance, and for carrying into effect every just and salutary measure.

Repubs should continue to rack up these easy votes, getting Democrats to vote against them. Great ammo for the 2014 elections where there are contests.

You are exactly right. Moreover, having several of these votes every day will put pressure on the house democrats, perhaps in a cumulative amount that pushes them to demand that the senate “compromise.” Obama needs to win the house in 2014 to be in a position to complete his destruction of America. Having these votes will make that more difficult for him to achieve.

Suddenly, the scalpel has lost favor with the Democrats. Did this happen with the negative publicity exposing Gosnell’s abortion clinic?

I wonder if the woman who tried to ram a vehicle into a government barrier (another barricade?) did so because of the amped-up rhetoric of the dems.

Her political affiliation is pertinent in this matter, since a pattern of angry Obama supporting criminals have gone on mass killing sprees lately.

O/T but important (I feel).

Mount Vernon is PRIVATELY owned and operated, yet the feds went to Mount Vernon and put up barricades to parking and to the bus access. The signs on the barricades blamed the “closure” on the shutdown.

But Mount Vernon was NOT closed, and is still operating, as they have stated on their website. I contacted the press person there at Mount Vernon for a status update, and her reply is as follows:

Thank you for your concern. It is very touching to hear from so many other people who care about this site so deeply.

Anything you can do to help get the word out that Mount Vernon and its parking lots are open would be much appreciated!

The President right now is getting what Presidents have wanted in the past: the line-item veto.

This is just another example of a government so large, they don’t even know which parks they operate or not.