HHS declines to testify before House committee on Obamacare rollout

HHS declines to testify before House committee on Obamacare rollout 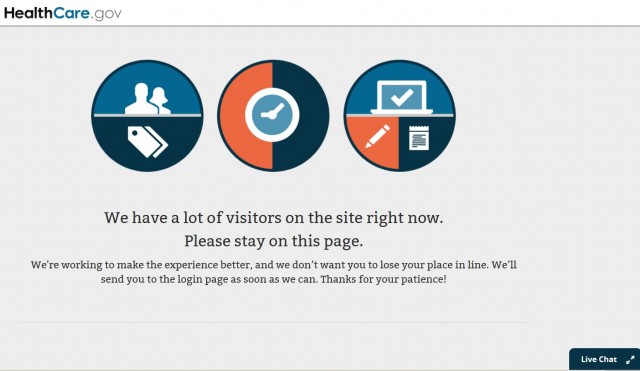 The House Energy and Commerce Committee will hold a hearing on October 24th to address the issues surrounding the health care law’s rollout.  The committee sent a letter to Health and Human Services Secretary Kathleen Sebelius asking that she appear before the committee to respond to inquiries and address her pre-launch comments in which she said the program was on track to launch on October 1st.

Not surprisingly, HHS has told majority staff that Sebelius would not attend the hearing and has so far not made other HHS officials available for the hearing.

The administration and the companies involved with implementation repeatedly assured the committee that everything was “on track” for October 1; however, the first two and a half weeks of open enrollment have been defined by significant “glitches” that have prevented Americans from being able to even use the system.

“It’s well past time for the administration to be straight and transparent with the American people. Top administration officials repeatedly testified everything was on track, but the broad technological failures reveal that was not the case,” said Chairman Fred Upton (R-MI). “Either the administration was not ready for launch, or it was not up to the job.”

As many others have noticed, Sebelius had no problem taking to a friendly outlet like the Daily Show to offer spin and nothing of substance in the way of answers about the ongoing website and state exchange problems.  Committee Chairman Fred Upton (R-MI) called Secretary Sebelius’ rebuff “wholly unacceptable.”

Sebelius recently appeared on the cable-television comedy program, “The Daily Show with Jon Stewart” for an interview that focused on the website’s problems.

But HHS and the White House have largely declined to disclose information about the problems plaguing the federal marketplace’s information technology system, which cost nearly $400 million to build, according to a report by the watchdog Government Accountability Office.

“This is wholly unacceptable. Secretary Sebelius had time for Jon Stewart, and we expect her to have time for Congress,” Upton said.

Meanwhile, among a list of growing problems and new discoveries, insurers are still getting incorrect data, many still can’t access the system, and some are even getting messages telling them they cannot pick a plan right now and to call a number “to find out how to pick your plan if the Marketplace has not contacted you by the middle of December 2013.”

But hey, according to Obama’s Chief Technology Officer as recently as Wednesday evening, “glitches happen” and the site was just overwhelmed.

Honest answers don’t seem to be forthcoming anytime soon.  At least not without FOIAs.

And the clock ticks on the individual mandate deadline.

Well, they got what they wanted. Nobody read the bill. Have to pass the bill to find out what was in it. Turns out that it was just money thrown at a problem, employing a lot of people to solve nothing. The gov can’t solve our problems when they are the biggest problem that we have.

well, look at all the unemployed bad programmers and IT idiots that were put back to work?

Then find HER in contempt if she shows the same respect for separation of powers that Holder has.

Show the Obamabanana Republic for what it is…

a nest of outlaws.

It is a comedy of the absurd, and the inmates are running the asylum.

I’ve given up hope until the next election cycle. Elections do have consequences, as we are so often reminded, and we get the government we deserve.

Note to Obama, though, Congress gets elected too, including the House of Representatives. Just FYI, you dim bulb empty chair.

Obama’s remark that the Republicans should go and win some elections was particularly ironic, given that the former ACORN ringleader has been so instrumental in aiding and abetting the electoral fraud that is routinely committed on behalf of Democrats by groups like ACORN (and no, they haven’t gone away, they just re-organized and changed their name).

Then there is Obama’s use of the IRS to intimidate any political groups that oppose his agenda, or that try to combat Democrat voter fraud (groups like True the Vote). Then there is Eric Holder using the power of the DOJ to sue every state that dares to even attempt to rein in voter fraud by implementing basic, common-sense safeguards such as voter ID.

Yes, Obama is all about elections — as long as he has the power to determine the outcome of those elections.

If she refuses to appear before her employers (American taxpayers represented by elected officials), then she should be fired immediately for insubordination.

If she fails to respond to a subpoena (as said above), she should be jailed and then prosecuted for the fraud she has already committed.

Congress and its committees are not without authority here. Time to activate Inherent Contempt procedures; let the House Sergeant-at-Arms arrest her and bring her to the hearing. Com’n, Repubs. PLAY HARD BALL.

“Under the inherent contempt power, the individual is brought before the House or Senate by the Sergeant-at-Arms, tried at the bar of the body, and can be imprisoned. The purpose of the imprisonment or other sanction may be either punitive or coercive. Thus, the witness can be imprisoned for a specified period of time as punishment, or for an indefinite period (but not, at least in the case of the House, beyond the adjournment of a session of the Congress) until he agrees to comply. The inherent contempt power has been recognized by the Supreme Court as inextricably related to Congress’s constitutionally-based power to investigate.”

Issa voted to raise debt ceiling and business as usual.

Among the things we need to face: We do not have three branches of government, like we did in the old days. Now we have the imperial presidency. He and his court will do whatever the hell they please. They don’t answer to the judiciary, the legislature, the laws, nor the constitution.
I no longer get enthused about congressional inquiries into anything.

The Republicans have to be willing to risk everything for their principles – but that seems like a forlorn hope. I believe that impeachment is a tool which should be used frequently. The fundamental problem may be that we have career politicians who expect to spend the majority of their adult lives in their congressional sinecures and perhaps even die in office. If those in Congress and in the Senate were term limited, say, 12 years for both, they would be much more likely to stand on principle, I suspect. As it stands, however, the Republicans – and maybe this applies to every minority party – is terrified of being vilified by the majority, and, in the case of the Republicans, by the media. I believe we also need a cable network which is considerably to the right of Fox.

RE: “we have career politicians who expect to spend the majority of their adult lives in their congressional sinecures and perhaps even die in office.”

Maybe term limits of 9 years and make all terms only 3 years for both the house and senate?

Oh yeah, and prohibitions on any other (even distantly) related family member (natural or by marriage) ever holding any seat at that level forevah!

At some point, I don’t know when it is likey to be, but somebody has to have their lives ruined by spending some difficult time behind bars and away from society.

As Holder has already shown, this administration has no respect for Congress and will not respond even if subpoenaed… so stop giving HHS any money at all until she does answer questions that Americans want answered.

“just over 1,000 were actually processed”

“Obama is hoping for 7 million signups. How many does he have? The administration refuses to disclose the number, but 10 days into the program, leaked reports showed 51,000 applicants of which just over 1,000 were actually processed.”

“…More enroll for Mars trip than for health exchange”

Those states who had the sense to say “no” to the Medicaid expansion will come out as the smart ones.

When folks sign up and see the “sticker shock” they’ll soon be relieved to be amazingly qualified for Medicaid. Medicaid rolls will expand big time.

Those states who accepted Medicaid expansion will soon find their 90/10 obligation skyrocket. When the feds back out of the deal (which they will) those states will be left holding the bag.

That is exactly right. The left will rail against the states that realized Lucy would pull the football, but problem is not in our stars, but in ObamaCare.

and to think of the Medicaid expansion if amnesty is passed!!!

No matter what the volume, that is not a reason for passing bad data to the insurance companies. That is not a volume problem, that is a coding problem.

Tea Party, baby — let’s start over, and do it our way.

Well, the greatest con on the American people, short of the short-sighted ventures of Wilson, Roosevelt and Johnson is upon us. Were it up to me, Obama would be notified of impeachment would be imminent then she’d be subpoenaed and if she refused, arrested for scheming to deceive and defraud the people of the United States.

I smell a grassroots boycott of Undesirable Care Act aka Obamafail.