Senate says no to CR conferees. Next step: negotiations with empty chairs. #shutdowncity

I think negotiating with empty chairs will be a good thing.

Reid and Obama are riding high, convinced the media will convey their messaging. There’s reason for them to think that: 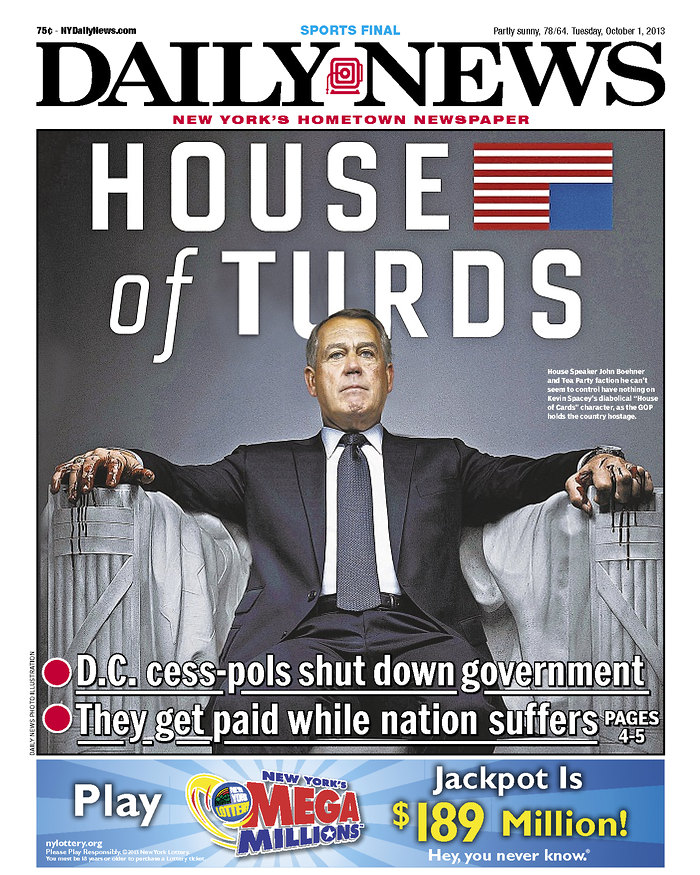 Perhaps Boehner needs to hold a joint press conference and let reporters ask questions of the empty highchair that will represent Senator Reid.

No negotiations without an open apology from Reid and Obama for referring to TEA party people as anarchists and terrorists.

Not a single dime more to the GOP until they use my contributions to buy a national media SWAT team that can rapidly and effectively counter all Republican character hit jobs from the pro-Totalitarian Press.

The Republicans need an articulate spokesman from the house.
They also need an honest forum.
What are the odds?

I keep reading and hearing that the House won’t vote on the Senate budget. Where is the Senate budget? To my understanding, no “Senate budget” exists. Why can’t a single Congressional Republican stand up and state succinctly that the only reason we are at this stage is because the Senate hasn’t passed a budget in the past five years, and still has not passed a single budget on which the House presently can even vote?

You’d really expect there are any Republicans capable of doing that?

Obama and the Democrats, who then controlled Congress, could have avoided the current difficulty by enacting legislation in 2009 or 2010 raising the limit to, say, $20 trillion–or abolishing it altogether, or suspending it until 2017. (A suspension of fixed duration, 3½ months, was in fact enacted this past February.)

It’s not hard to think of reasons why instead they followed the custom of enacting only stopgap increases instead of what would have amounted to a blank check. For one, it would have been politically disadvantageous, if not disastrous, for Democrats to announce their intention to put the country that deeply into debt. For another, Obama had not yet been re-elected, so that a blank check from congressional Democrats might have been cashed by a Republican president.

Democrats in Congress are no more eager than Republicans to give up the leverage that comes with the need for periodic legislation raising the debt limit. As we noted Friday, Democrats attempted unsuccessfully to use that leverage 40 years ago to enact laws restricting political speech. And in 2006 a young Democratic senator voted against raising the limit to a comparatively paltry $8.965 trillion.
—Taranto WSJ

Just a lil’ history for your use.

There is a simple reason the democrats didn’t do what you suggest, Ragspierre, and that is because they don’t want to let a manufactured crisis go to waste.

But there is such a thing as “crisis fatigue”.

Pretty soon, they just look to kick the boy’s ass…

They ginned up hysteria and drove tons of traffic to their sites (a CNN article an hour ago had 16,000 comments, as I post this it is over 19,000 comments and the comment counter continues to increase rapidly).

But like the sequester, the average person isn’t going to feel the partial shutdown.

Frankly I hope the US Government stays shut down. Screw ’em! The sun rose this morning, 99.9% of those with jobs went to work & schools are open. The US military is still on duty along with the DOJ FBI, ICE & DEA. The Coast Guard is still patrolling our waters and Customs Dept is still inspecting shipments. Social Security checks are still going out and hospitals and doctors are seeing patients. We my actually save some money with millions of “non-essential” federal bureaucrats and paper shufflers staying home. Half of the “services” the Feds “provide” can be taken up by the states and most done away with permanently. I for one will lose no sleep!

Every second this corrupt government is “Shutdown” the money wasted by “Non-essential” services is reduced.

Oh, and I am just waiting for the Truckers to come in and start parking their trailers in mid intersection in DC come Oct 11th.

Truckers are the salt of the earth.

As to the media bias, I have but one word:

Nobody outside Nanny York reads that fishwrap, so who’s looking?