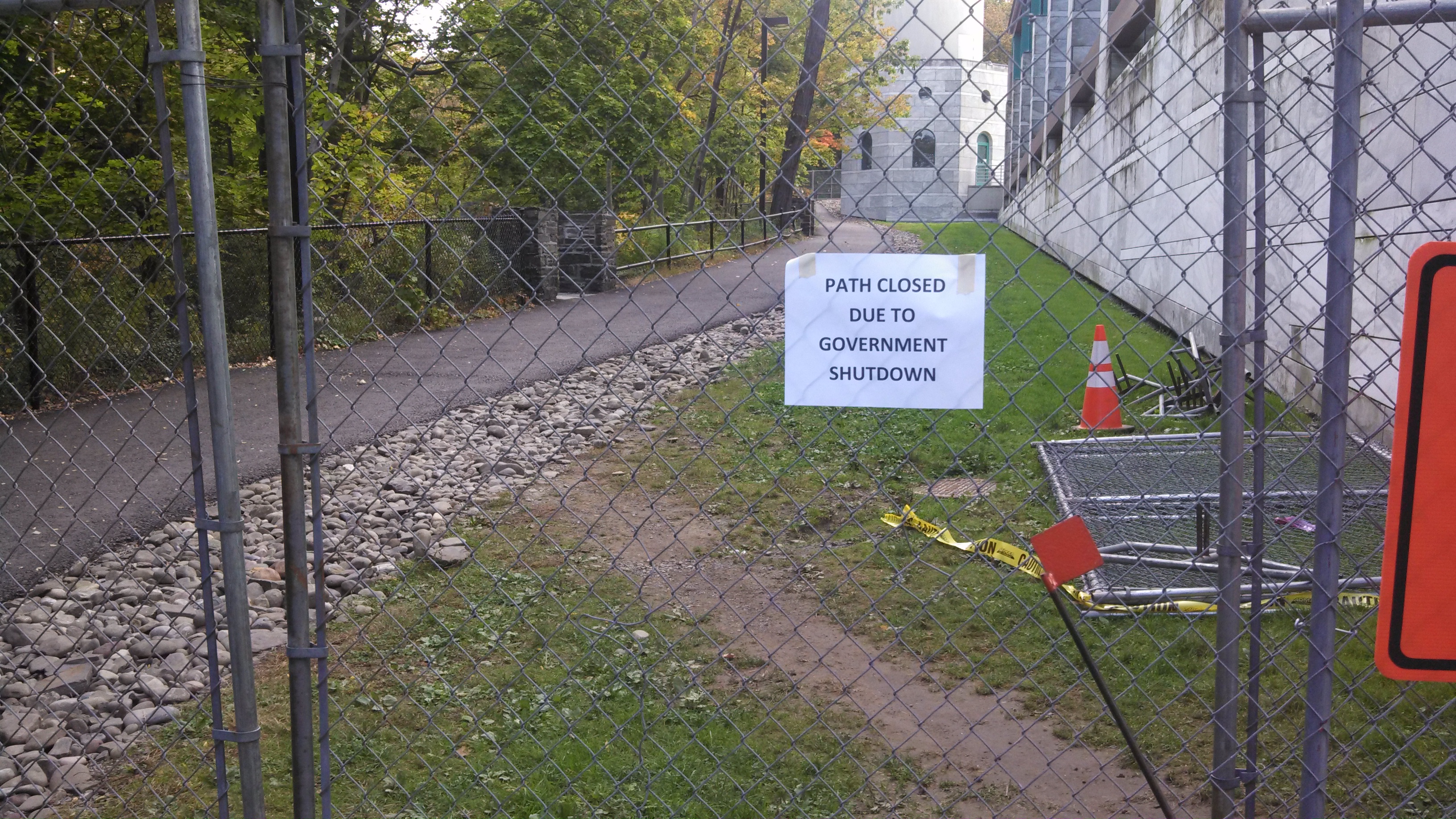 In addition to the real shutdowns at the WWII Memorial and elsewhere, we can expect to see all sorts of non-shutdowns blamed on the federal government partial shutdown.

I noticed this along a path in the Collegetown section of Ithaca, a path along the Gorge next to the Schwartz Theater.  That path has been under construction for months.

But today it had a sign announcing the path was closed due to the government shutdown. 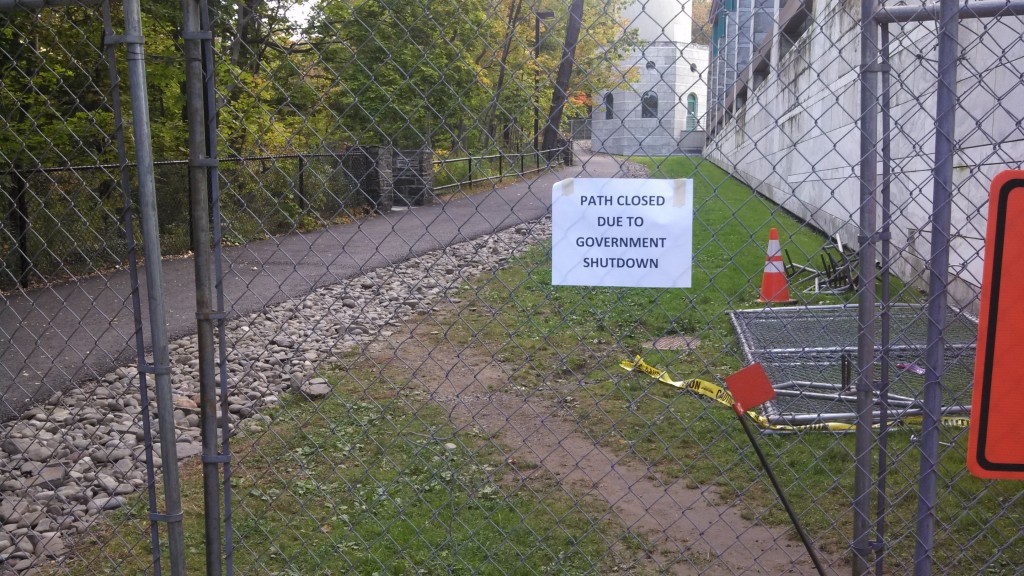 I checked with Cornell media relations, and after they checked, they confirmed that the sign was a fake and the path was not closed due to a government shutdown:

The path is closed for scheduled work along the gorge trail. Absolutely nothing to do with the federal government shutdown. That’s just a good sign of Ithaca’s civic-sensitive sense of humor.

I can’t say that I agree with that last statement. All of the students walking past it probably believed it was true, and blamed Republicans for having to take a less direct route.

I returned after hearing from Cornell to get student reaction. The signs, however, had been removed, but the messaging damage was done for the hundreds of students who already had walked by.

Get the bolt cutters and walk through anyway. We need to stop letting these little weenies (Fed employees) push us around.

Somewhere in a top-secret parody lab, parody scientists are working on a Hitler Downfall parody to end all parodies and bring an abrupt end to Obama’s war on WWII Vets.

At least I hope they are.

Call me an armchair creative director if you must, but I’d like to see Hitler lashing out at Obama for foolishly and needlessly creating an army of Claus von Stauffenbergs. Have him order that Rommel be summoned immediately, to lead armies that no longer exist, only to be told he ordered Rommel’s death. Sorry O. Your old-media army ain’t what it used to be. Growing conservative media and technology have opened new fronts.

I have the feeling that somewhere in Washington is occurring a scene similar to the Panzerlied scene in the Battle of the Bulge where Robert Shaw complains about “Too Many Boys!” then orders his sergeant to sing…”Sing louder!” http://youtube.com/watch?v=8JDkdc246QQ

It’s not even funny cuz obscenity and scatology don’t make for humor unless you’re a pre-pubescent. Then, it’s also erroneous. Boehner isn’t the problem. Reid and Obama are.

Theater of the Absurd!

This is up at Ace of Spades:

The National Park Service has ordered the closure of a Virginia park that sits on federal land, even though the government provides no resources for its maintenance or operation.

The Claude Moore Colonial Farm announced on Wednesday that NPS has ordered it to suspend operations until Congress agrees to a deal to fund the federal government.

According to Anna Eberly, managing director of the farm, NPS sent law enforcement agents to the park on Tuesday evening to remove staff and volunteers from the property.

“You do have to wonder about the wisdom of an organization that would use staff they don’t have the money to pay to evict visitors from a park site that operates without costing them any money,” she said.

According to the linked article the farm had a thirty year lease with the Feds.

By what right can the NPS force them to close?

If I were Governor of VA I’d have someone take a hard look at the lease and, if at all possible, have State Troopers accompany the legal operators of the park tomorrow in order to re-open it.

You know what else would be a “good sign of Ithaca’s civic-sensitive sense of humor”?

Put some yellow police tape around the Women’s Center or the LGBT Center with a sign saying they’re closed due to shut down.

If you get in trouble, just tell ’em it’s your pop-art statement in response to Christo’s “Wrapped Reichstag.”

“This path closed due to government shutdown caused by Harry Reid’s intransigence.”

“This clinic closed due to President Obama’s unwillingness to talk to Republicans.”

“This park closed due to Democrat’s blaming Republicans for everything Democrats have done.”

I suggest Helvetica, at least 36 point, all caps, landscape format. Plaster them everywhere, and be creative.

Punch Back Twice As Hard!

Put up a sign overnight that the path is open due to Republican efforts!

Any person who would be fooled by such an obviously FAKED sign is obviously not college material. Expel them now!

“The DNC is nearly broke”

The Democratic National Committee remains so deeply in the hole from paying for the last election that it is struggling to pay its own vendors.

“Considering the DNC has a very high profile politician, President Obama, to go out and raise money on their behalf,….

” there must be some real organization issues behind the scenes. As of now, their books show $18.1M in creditors and $12.5 in the bank.”

So they owe (already late in payment on most) about 150% more then they have in cash.

My Goodness!!!! If just one Vendor presses for payment due NOW, they can force the entire DNC into bankruptcy court and most likely out of existence!!!!

“Several executives at firms that contract to provide services to the party — speaking anonymously to avoid antagonizing what remains an important if troubled client — describe an organization playing for time as they raise alarms about past-due bills falling further behind. And senior strategists close to the DNC say they worry the organization appears to have no road map back to solvency. “They really thought they could get this money raised by the summer,” one said, “but the fact is, from talking to people over there, they have no real plan for how to solve this.”

DNC national press secretary Michael Czin says the committee is working with vendors on a case-by-case basis to pay down their tabs. And filings show the organization over the last five months has made $4.5 million in payments to the Amalgamated Bank and appears to be hewing to a $1 million-per-month installment schedule now. “While we work to retire our debt, we’re not taking our foot off the pedal and are making the investments that will help ensure that Democrats are successful in 2014, 2016, and beyond,” Czin said. He pointed to ongoing work by the DNC’s National Finance Committee, which met over the weekend in Colorado to discuss fundraising strategy.”

Typical of the Collective.

If they have trouble with anything real, they just lie.

Wholly CRAP, Batman…!!!
WWII veterans visiting the memorial that was erected in their honor vs. paid SEIU protesters: great optics for the Obama administration! But it gets worse. The protesters claimed to be furloughed federal employees:

In the video below these protesters were marching towards the press gaggle and I was asking them to show their federal IDs to prove they were in fact federal workers. No one wore their federal ID and none would provide it to prove their claim.
Then, remarkably, a guy carrying a sign passed by wearing a McDonald’s employee shirt, which I noted. I then began asking them how much they had been paid to protest, at which point the guy wearing the McDonald’s shirt came back and admitted he had been paid $15 to attend the protest.

Talk about your epic FAIL…!!!

“All of the students walking past it probably believed it was true,..”

William – your assessment of the knowledge and intellect of Cornell students is 100% on the mark!

Not just Cornell students. I’d venture to say the vast majority and I may be off by a few percentage points.

The Lefties have become the sign-hanging scolds whom they used to mock in song.

Does anyone know if Obama’s minions have Barry-caded the Martin Luther King Memorial? Something to ponder….

I am preferring the Police Line – Do Not Cross.

They are using the highest level of social restraints we have for the most minor of problems.

When I was a kid we had a home made high jumping contraption. I always came last but I could definitely leap over those barricades they paid $ to hire.