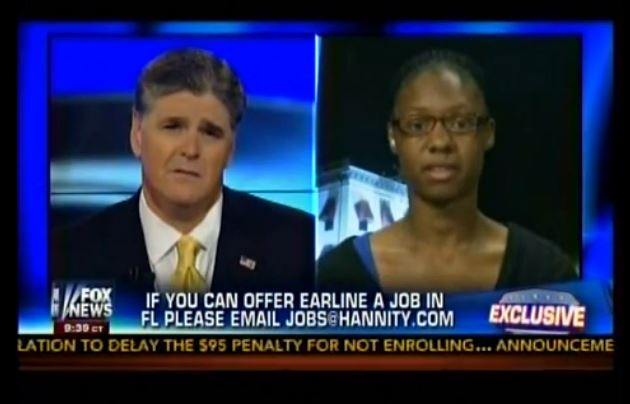 Earline Davis was an Obamacare healthcare.gov telephone call center rep who took a phone call from Sean Hannity the other day when he called in to the general phone number and the call was routed to her.

She answered his questions, with a supervisor hovering over her, and her truthful answers were embarrassing to the Obama administration.

For that she was fired.

I haven’t seen Davis’ employer identified; it doesn’t appear that she was a government employee, more likely working for a private call center hired by the government.

Waiting for Obama to say the call center acted “stupidly” for firing Davis.

Norn Ornstein, who has been around DC forever, has this wonderful snippet …

Go back, first, to Max Baucus’s famous and widely distorted and misused “train wreck” comment in a hearing to Health and Human Services Secretary Kathleen Sebelius in April 2013. Contrary to Ted Cruz and countless other Republicans, Baucus did not call Obamacare a train wreck—he was referring directly to its implementation through the website. He said, “I understand you’ve hired a contractor. I’m just worried that that’s going to be money down the drain because contractors like to make money more than they like to do anything else. That’s their job. They’ve got to worry about their shareholders and whatnot.

.. they knew back in April that the web site was going to be a “train wreck.”

If Sebelius, the president, the leaders at the Centers for Medicare and Medicaid Services, and other White House officials were unaware before that hearing about the implementation problems, they could not be unaware afterward. And, as we are now hearing, the stark internal warnings from tech experts of deep-seated problems in the programs came months ago and went unheeded.

.. HHS secretary Sebelius has been lying her ass off since the healthcare.gov rollout claiming the the “Sargent Schultz defense” for her hapless incompetent boss.

If they knew it was screwed up in April, does anybody really think it will be fixed by the end of the year (let alone any earlier date) ?

After the shutdown and the Democrat failure to negotiate, if Obama doesn’t go back to Congress to delay ObamaCare’s start, the House should impeach his ass. Forget party lines, what Democrat wants it set down in a recorded vote that failure to follow the law as agreed by the Congress and signed by the President should be excusable ? … if so, what will they do when a Republican is POTUS ?

The kicker in this whole situation is this fiasco is the reason the Republicans shut the government down and the media won’t for a second connect the dots.

The Republicans didn’t shut down the govt.

They passed many bills with CR govt funding and went down the road of compromising after the first one which lacked funding for Obamacare to another which only specified a one year individual mandate delay to another which only included prevention of exemption of the Senate, Congress, and the White House from Obamacare.

Republicans compromised and the Democrats refused to compromise at every turn, confident they had the liberal media in their pocket to propagandize for them to the public.

And then the cluster f*ck came.

It is not a mistake to use the word contractor … depending on the supply chain to the gov’t, the firms involved were referred to as supplier, sub-contractor, contractor, prime contractor, integration contractor, etc. Any company entering into contract with the gov’t is a ‘contractor’ from the gov’ts point of view. In this case as I understand it, contractors were tasked with coding, the government did the project management and testing.

“Unlike virtually every other federal it project, HHS chose to run the project themselves.”

That was so they could do their pay to play money laundering. I wish someone would have asked those contractors how much each got paid for their part of the program. I bet it adds up to a lot less then half a billion dollars.

Racist government. Firing an honest black woman who is caring and wants to do a good job for the customer. Couldn’t she be more like Michelle O.

I hope they find another job for her, and one that pays better than $26k a year.

I sent an e-mail to Earlene via [email protected] telling her how much we support her and wish her and her children well.

And for Obama? Mr President, Tear Down Your Butthurt Ego.

When you compare Ms. Davis and Sebelius I’m reminded of a quote by Lt Col Paul Yingling that is more and more true:

“A private who loses a rifle* suffers far greater consequences than a general who loses a war.”

*I am in no way asserting that Ms. Davis did anything “wrong” other than hurt the cause of Obamacare.

…But sore Obama has to throw a tantrum and have her fired!

This is KILLER good.

ianal … can they just fire her without (just) cause? It’s not like she’s a white male American tea partier (on which there is open season, “fire at will”). Doesn’t she have “rights”, unionized or not?

And they seem to specifically fire her for doing her job honestly. Under government contract, don’t they have obligation ultimately to work on behalf of “we the people”?

Is our government again passing down mandates to not serve conservatives (like Hannity and his listeners) equally, but rather to hang up on them? She was answering questions that would be heard by perhaps millions, making her a very efficient employee. For that she was fired. (or was she fired for revealing to millions that calling these expensive call centers is a waste of time?)

Of course Lerner assaulted conservatives for years apparently, and was rewarded with a long paid vacation and golden early retirement. Are public unions and their mostly union contractors just in the business of soaking up taxpayer dollars, in return for supporting the Democrat party? Quid pro quo, en masse?

Ianal, but it’s my understanding that in Florida an employer can fire you “at will”

Is she going to sue Andrew Breitbart?

I wish everyone would read, it is an eyeopener for sure: When Frogs Jump, By Daren Jonescu over on AT (http://www.americanthinker.com/2013/10/when_frogs_jump.html).

People say a third party is a looser but I think the establishment republicans, with their declared war on the tea party, have already begun a third party and intend to scrape the conservatives off the plate(which they consider their plate in the first place).

It is hard to keep reading though, but it just has to be a call for action, remember the things they did to “punish” the tea party and those who donated to them and nasty, dirty unnecessary things they did to punish us during the shutdown !

The guy nailed it.

Sebelius to Obama “How am I doing my job Mr. President?” Obama to Sebelius “Great, I didn’t hire you to be competent.”

It probably isn’t all that bad for her – Haannity is apparently going to pay her tea $26k for the next year. If true, that is the stand up thing to do, and it sends the right message to anyone else they try calling in the future.

17 posts and not one Obama “if I had a call center operator, she’d look like Earline” joke? Y’all are slippin’.

He had one that looked like her. He had her fired.

Hannity was very classy about this.

He got Ms Davis on his radio show, offered her a gift personally, and to her child. He is actively trying to find her a job in her current area.

Classy. Someone got punished for doing her job because she spoke with him. And he is doing the right thing.

That is a truly classy guy. Well done Mr. Hannity.

It’s sad that we have such a vindictive group of people in this administration; of course they are only acting like good Chicago politicians.

The Obama Administration will be remembered not only for it’s failures which are legion but for it’s vindictiveness. They accept absolutely no criticism from even friends and allies. If the truth damns them, then you are expected to lie to defend them. Reporters are afraid to say anything other than to praise them and employees are expected to hide things from even family and friends lest they reflect on any problems or challenges that make the Administration look less than perfect. If you can’t say something good you will lose your job. They say Nixon had an enemies list but Obama doesn’t bother with a list. He doesn’t need one because his revenge is swift and devastating to these on the receiving end.

Frankly I don’t think Obammy wants to be bothered. He just wants to look good and have a good script. Every big boss has their own creep-in-charge of firing. It’s Valerie J. who is petty and vindictive. I’m sure she sends out the dictates on pink slips.