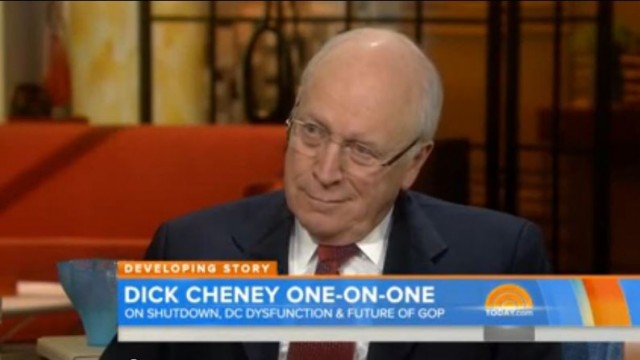 Dick Cheney appeared on Hannity, and stated what all thinking people know to be true, Obama is the radical in Washington, D.C., not the Tea Party:

FMR VICE PRES. DICK CHENEY: I’m not unsympathetic to the frustration, I think, that’s led many Americans to sign on for or become part of the tea party. I’m as frustrated as anybody else can be, but I think we have a situation where the circumstances in Washington, the inability and the unwillingness of the this administration to come to grips with our basic long-term debt problem, for example. The frustration out there is very, very high. And so when I see people talking about the tea party, I don’t think of the tea party as extremists the way some of the folks in Washington want to describe them. The extremist in Washington is Barack Obama. He’s the guy that wants to fundamentally transform our health care system. He’s the guy who has done enormous damage to America’s standing in the world. To the extent there is an extremist or radical political view in Washington these days, I believe it is the president of the United States.

And as a palate cleanser, here’s Cheney on 60 Minutes, where Dr. Sanjay Gupta tried to imply Cheney was mentally disabled because of his heart condition at the time of the decisions on Iraq and Afghanistan. Cheney had none of it.

The Tea Party: Founded by a Democrat in reaction to the “force others to pay your way” mentality of Obama and the refusal of Republicans to stand opposed to it. That’s “extreme?”

I admire the guts of this guy. He appeared on 60 Minutes to discuss his heart problems and Sanjay Gupta all but said that it affected his judgment and he should have resigned. I don’t know why he puts up with that crap but kudos to him.

Hey Gupta, does the VP sound like a dumb guy? You should know, all you have to do is look at your fellow commenters on the show. Use them as a role model. Nah, they’re sharp and well, Dick Cheney lost his mind. Of course.

Cheney is a smart guy who gets to the point without hesitation.

Nothing like this exists in the executive currently residing in the White House.

We are the losers…

A completely different way of thinking is necessary, and it starts with embracing delusions.

Thanks a million, Professor J., for starting my day with this post!! Mr.Cheney is a truly great man, as is his
8-year boss. He also was a great Sec’y of Defense in the Bush-1 administration and a hugely talented private sector CEO between those two services. GAWD, I miss them.

I still smile when I harken back to that D.C.press corps annual thing a few years ago when Cheney was “intuiting” queries with answers before he read them: “Cute as a button.” was his answer, followed by reading the query: “Describe John Edwards.”

The slime we’re stuck with now are fecal consuming microbes next to the giants of American leadership and patriotism who preceded them.

Yeah, well my heart malfunctions every time I think of Herr Media-stein in the WH.

Cheney is spot on in description of Obama. Obama or people who are associated with him have no respect for others including themselves. They are the lowest of the low with no class or decency.

“Change won’t come from the top, I would say. Change will come from a mobilized grass roots.” – Barack Obama, Dreams From my Father

Unless those mobilized grass roots are Republican.

Something very refreshing about calling a “club” a “club”…or a “spade” a “spade”. Barak Obama has been a disaster mostly to the Rule of Law which used to be respected but is largely being ignored now. Cleptocracy is becoming the prevailing form of government in the U.S. as the government writes the laws AND decides on how the laws will be enforced AND decides on who to prosecute for breaking the laws. When you can do those, you can do anything.

More death threats and death wishes from the mentally deranged lunatic-left extremists against cheney in 3…2..1…

Anchovy: They undoubtedly do. Along with many, many things—BIG & Small—including rations for our overseas troops.