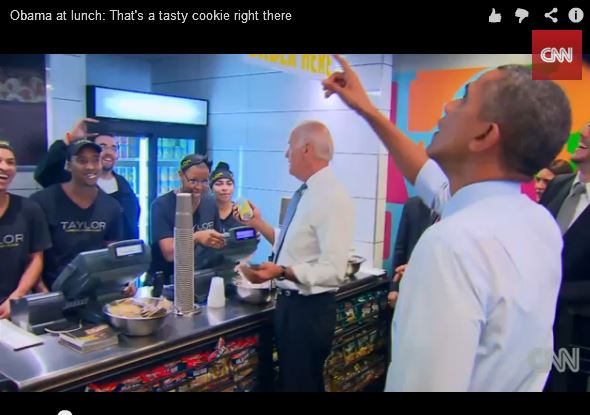 Obama’s trek for a lunchtime photo op struck me as trying too hard.

Contriving to make like he doesn’t have a worry in the world and is in the catbird’s seat tells me he knows his position is just the opposite.

So does the cancellation of his Asia trip. Obama knows he is in an increasingly precarious position, and that public opinion could shift very quickly against the captain of a ship perceived as sinking. The captain can blame the crew, but the captain will be held responsible.

While we shouldn’t read too much into a short term Gallup Daily Tracking move, if this is any reflection of reality, Obama is getting hurt badly by his no-negotiation posture and the pettiness of his bullying of Veterans at the WWII Memorial, among others. 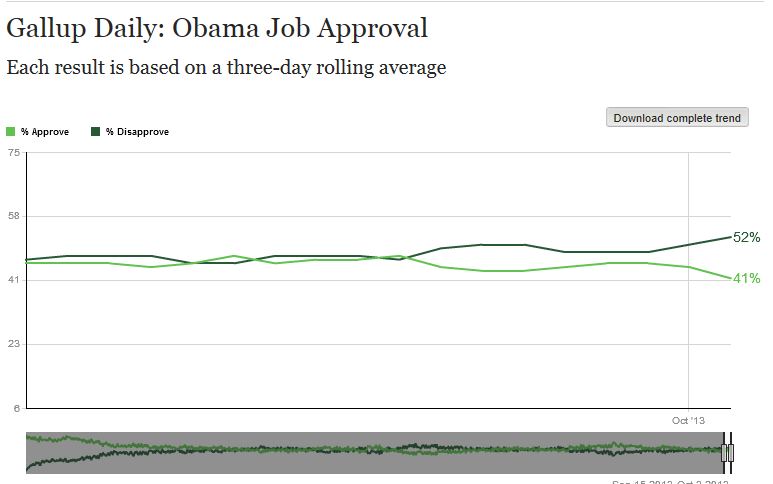 With each day, as Republicans in the House pass funding bills, Democrats appear ever more intransigent. Denying funding to children with cancer? Even CNN called Harry Reid out on that.

The hateful language spewing daily from senior Democratic politicians does them no good.

Don’t fall prey to the pundits and “sky is falling” Republican who are predicting that this is the worst thing ever for Republicans and a bonanza for Obama.

It’s way too early to know how this plays out in electoral terms down the road. Don’t worry about that. Stay strong.

It’s all about moving the ball down the field in a long game over the future of the country. You don’t need a touchdown or even a field goal on this drive. Field position matters for what is to come.

And the time clock is on our side because the Obama presidency has an expiration date.

But they will fund this. Have to keep the presses rolling.

Called my congressman (Dave Reichert-WA) yesterday and told them I support the piecemeal efforts of House Republicans 100% and to keep up the good work. He even had rent a mob protesters today and stated that he wanted (his typical response) changes in the health care law. Given that he has gone squish many times before, I thought he should be given helpful encouragement (especially in light of King and Nunes whining about the “shutdown”).

Anybody who lives in his district in Washington State should give his offices a call. I called both his local and Washington DC office. Don’t email them. I am almost certain they go straight to the junk mail box.

REPORT: the federal government shutdown will last longer than a Kardashian marriage

When will we head into a weekend without fear that the Republican leadership will fold? Perhaps when Senators Cruz and Lee and Congressman Gohmert assume senior leadership positions?

I am seeing all over that the leadership wants to cave, but their members are too afraid of the tea party and their base to vote to cave. So I guess we will see who they are more afraid of, Democrats or Us.

We may have lost the seat, but I think we all know wher Dick would have been on this issue.

I don’t care that we lost the seat. It would have voted Democrat either way. Just like John McCain’s seat. That man really is the terminal definition of RINO and Graham is a close second followed by Murkowski, Collins, Corker, Alexander, Cornyn, Isaakson, and Chambliss. These big government go along republicans have no fight in them and need to be retired. With Murkowski, forcibly so.

Back in the 90s, they caved a day before Clinton was going to cave.

What about caving in high style, or with a twofer deal? Cave and then offer an amnesty deal. Sounds about right for Boehner-Cantor.

I would not in the slightest put it past Cantor. That thing is a lying sack of weasel crap. I think I had Boehner wrong thought. He is a coward and is paralyzed from doing anything because he doesn’t want piss off either the “moderate” traitors or the much larger conservative wing of the party. He doesn’t have Nancy’s balls, because if he did, he would tell the “moderates” to shut up and get in line.

These idiots — not even an inkling of a public relations campaign to get the public on their side.

There is no way these clowns are not going to fold. But the bigger clowns are us, for tolerating these people in leadership positions of the GOP.

Durbin admitted on the Senate floor today that Cruz “inspired” the shutdown with his 21-hour speech.

Field position matters for what is to come.

The Senate Democrats had time to pass a bill today!!

The very important bill that if not passed would mean certain doom for government workers, women and children, and the Middle Class was:

Declaring National Chess Week starting next Monday! For all you chess fans, Harry Reid’s got your back! (as long as you don’t have cancer, otherwise piss up a rope)

YAY. Now that we got THAT out of the way, time to declare the session over and go home!

Is it just me, or is that skit from “Dumb and dumber”?

Well, the Republicans, and a couple dozen Democrats, are standing their ground. They cannot support open and unfettered exploitation of men and women’s labor. They are taking a principled stand. They cannot afford to pursue unmerited compromises. They should resist efforts to force them to the back of the bus.

This is literally for the children, and children’s children, etc. There should be no expectation of instant or immediate gratification without consequence. We are playing the long game.

Don’t forget the children! A human life evolves from conception to death. This should already be common knowledge, and probably is; but, the extraordinary effort to rationalize and comfort people in their “choice” is unprecedented in general terms.

I agree it is too early to see how it will all work out insofar as the public opinion aspect. We are being blamed, the media is on Obama’s side, but these are things we knew going in – or should have known – and have factored in (I hope!).

And we are pretty much stuck standing firm and see what happens. Obama won’t budge as long as he thinks he’s winning. Democrats do sound shrill, including him, so it may be that the polling hasn’t moved their way as much as expected.

Of course we keep passing “piecemeal” bills – and I hope we start doing a better job of explaining that that is the NORMAL way of funding the government, one department at a time. If the Senate was functional, there would be 13 appropriations bills sent to the President to sign.

But just because we have no choice and no plan doesn’t mean that it was smart to get into this position. The risk of a Democratic House and Senate for two more years under Obama is nothing to be sneezed at unless you are just so nutbar as to want the results.

The plan was to defund further implementation of Obamacare. Which we have done by shutting the government down. I would rather see them repeal it, but we could try next year if republicans take over the senate.

We keep funding the government agencies piecemeal. This also shows how bloated, like sequestration did, the government really is. The world didn’t end and republicans are not being targeted by grannies. Obama’s approval rating is falling and he and Reid are looking like uncompromising fools.

Besides, LIV are by definition no/low information. They won’t remember this anyways by this time next year. They will be pissed that they have to buy a 2-300$ a month (at least) health insurance plan or they will be fined. I don’t think the democrats will look good at all shutting the government down over that. Do you?

$200-$300 monthly premiums? i wish. i used the handy-dandy calculator provided by kaiser (linked to from the gov.site).
they estimated my monthly premium to be $900…plus a humungous deductible. that’s certainly lightyears away from the “free” healthcare that was promised and that LIV’s were expecting.
meanwhile, the lie continues (albeit slightly altered): a former obama administration official was on the bill maher show tonight who said, repeatedly, that premiums would be around 35 bucks ! unbelievable.

I’ve probably jinxed it — every time I email Speaker Boehner, he does the OPPOSITE of what I’d urged.

Today I told him to stand strong and not back down.

Keep sending out the civics lesson to the media and everyone you know, too. Thomas Sowell wrote a very clear one yesterday. Pass it on. http://spectator.org/archives/2013/10/03/who-shut-down-the-government

it was a bizarre photo-op. the prez and vice-prez…just a coupla guys in shirtsleeves walkin’ down to the fast food joint ’cause, heck, that’s all they can afford with that shutdown caused by those mean old republicans…but, of course, all the ‘news’ outlets ate it up. i saw it at least seven times today on local and national tv stations…complete with teasers “president goes for a walk!”…ugh. shoot me now.

Go to Facebook to read some interesting comments from people.

Then there is this: Analysis: IT experts question architecture of Obamacare website

Notice the program makes heavy use of JavaScript. I’m no programmer but I do know there are ongoing critical issues with JavaScript.

Sticker shock and software failure may doom this politically. It begins to look like people may not be able to afford the new heath care contrary to promises made by the Democrat Party. Then they will get socked with punitive fines. Large numbers of people may lose existing health care and will not be able to obtain new health care leaving them and their families uninsured.

I note that FEMA is recalling “unessential” employees for Tropical Storm Karen that were furloughed earlier. Very interesting. Puts the lie to the bleating Demo sheeple and Rino doom-sayers about running out of money and loss of essential services.

Amen. Stay the course. Obama will be out of office in 3.3 years. By then people will have had enough of Obamacare.

Remember that the local press covers this pettiness when it hurts an area’s economy. They also cover the overreach such as the National Parks Service’s attempts to close private businesses adjacent to federal land or on land leased from the feds. That coverage might feature a well known local business person noting this was never attempted in prior shutdowns.

Even lo-infos get that it is starts with chicken and rhymes with hit to put barricades across unmanned scenic overlooks on a US highway that goes through a National Park.

I think it important, at this point, to remind ourselves that regardless of the outcome of this particular fight it is only a brief skirmish in what will prove a very long war.

The Colonists got their butts kicked badly, and repeatedly, but they kept up the fight.

Let the clock run. Democrats will lose the senate.

I’m surprised he didn’t hand out order forms for that God-awful medical insurance he’s been hawking.