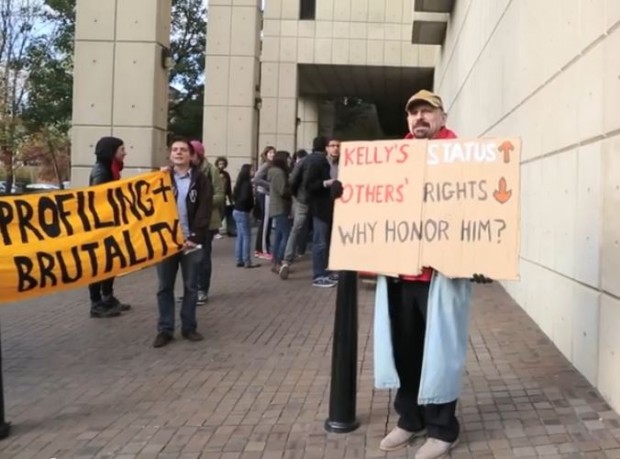 Just two days after NYC Police Commissioner Ray Kelly was shouted down at Brown University over NYC’s Stop and Frisk policy, with many protesters citing a finding by a trial Judge of racial discrimination, the Court of Appeals for the Second Circuit has stayed the ruling, and kicked the trial judge off the case. (Full Order embedded at bottom of post.)

In a short but scathing ruling, the Court of Appeals ruled that Judge Shira A. Scheindlin “ran afoul of the Code of Conduct for United States Judges”:

Upon review of the record in these cases, we conclude that the District Judge ran afoul of the Code of Conduct for United States Judges, Canon 2 (“A judge should avoid impropriety and the appearance of impropriety in all activities.”); see also Canon 3(C)(1) (“A judge shall disqualify himself or herself in a proceeding in which the judge’s impartiality might reasonably be questioned . . . .”), and that the appearance of impartiality surrounding this litigation was compromised by the District Judge’s improper application of the Court’s “related case rule,” see Transfer of Related Cases, S.D.N.Y. & E.D.N.Y. Local Rule 13(a),1 and by a series of media interviews and public statements purporting to respond publicly to criticism of the District Court.2

Accordingly, we conclude that, in the interest, and appearance, of fair and impartial administration of justice, UPON REMAND, these cases shall be assigned to a different District Judge, chosen randomly under the established practices of the District Court for the Southern District of New York. This newly-designated District Judge shall implement this Court’s mandate staying all proceedings and otherwise await further action by the Court of Appeals on the merits of the ongoing appeals.

In taking these actions, we intimate no view on the substance or merits of the pending appeals, which have yet to be fully briefed and argued.

Bill de Blasio, the Democratic nominee for mayor, whom recent polls have shown to be far ahead of his Republican opponent, Joseph J. Lhota, said he was “extremely disappointed” by the decision.

“We have to end the overuse of stop-and-frisk, and any delay only means a continued and unnecessary rift between our police and the people they protect,” Mr. de Blasio said in a statement.

Mr. Lhota applauded the ruling. “As I have said all along, Judge Scheindlin’s biased conduct corrupted the case,” he said in a statement, adding that the next mayor “absolutely must continue this appeal.”

Lawyers involved in the lawsuit said they would appeal the panel’s decision, which put off a number of changes Judge Scheindlin had ordered. Those included installing an outside lawyer to monitor the Police Department’s compliance with the Constitution and directing some officers to wear cameras in a pilot program to record their street interactions.

Sadly, I think that Commentate Bill de Blasio will stifle the appeal.

Nuevo Ork is headed for Detroit-level FAIL as fast as the Collective can steer it.

“A judge shall disqualify himself or herself in a proceeding in which the judge’s impartiality might reasonably be questioned . . . .”

If this were true, Kagan should have recused herself during the Obamacare case being considered by SCOTUS a year ago..

Judge Shira Scheindlin represents the judicial liberal bias. And her courtroom behavior is predictably left. In this commie city, New York, I’m shocked that another court has called her on her impartiality.

I will vote for Joe Lhota. He would run this city like Giuliani did.

The protestors like their “stop and frisk” executed out-of-sight and out-of-mind… until it happens to them. Case in point: Obamacare.

Hiding in plain sight, Scheindlin is a typical totalitarian lefty. Her behavior during this so-called trial was absurd, illogical and now, proven to be far from impartial. It’s too bad she can’t be arrested herself.

Joe Lhota will probably get a campaign boost, he’s the only candidate who will protect citizens by protecting the police from overseers, monitors and judges like this. In a city where the #1 cause of death for young black males is murder, this ruling gives inner-city mothers some hope.

I read an article on Bloomberg yesterday that many top Wall Streeters have met with de Blasio and think he will be a good mayor for NYC. I have to wonder if they are making the same mistake in backing him that many of them made in backing Obama.

I’m puzzled by the uproar over stop and frisk. If someone has presented themselves as a threat they need to be stopped and frisked. If the stop is a mistake, there is no harm or foul. Some things a good cop will notice that Joe Sixpack citizen might not…some guy diddy bopping along the street at odd hours with a shopping bag apparently empty except the one heavy item. That’s called a “Detroit Holster” and frequently contains a pistol or revolver….quick to access and easy to just shoot through without pull the gun out if necessary. Also easy to dispose of when fleeing. A friend of mine, a federal police officer, was shot and killed by just such a gun-in-a-bag-guy on 21 September 2001 when security was heightened in the federal building. The officer had reached across the security check-in table to grab the bag…too late and the shot went in his armpit and hit his heart, dead on the spot. Had the shooter been stopped and frisked outside the lobby by local police (who did not have Stop & Frisk authority in those days) Ron would be alive to day.

I’m not concerned about being stopped and frisked. Happens at the airport every time I fly out and back anyway. Reason is that I won’t be breaking the law when and where I am, so have nothing to lose but a few moments.

Aridog, sorry for the loss of your friend and police officer.

I agree with you about stop and frisk: it’s important and it’s no big deal. For years I was “detected” and patted down as I walked into work. (I worked at nuclear power plants.) Occasionally it happens to me at airports. I got the full search, test and pat-down on my last trip. TSA was through, courteous and efficient. I smiled, because it was nice to get a pause in my hurry-up, and told the TSA guy, “Thanks for keeping me safe.”

You surrendered your 4th amendment rights for a pat on the head and courteous service?

The TSA doesn’t do jack to keep us safe, but you can think that if it helps. I won’t point out that TSA agents have taken bribes to allow drugs to be smuggled.

Sooner or later, a package of “drugs” will be semtex and a detonator.

Aridog, indeed sorry for your loss and the loss of a good man.

It’s interesting isn’t it: the very people who are in a lather over “stop-and-frisk” no doubt support the TSA completely. They’ll say that airport security is ‘special’.

What’s so special about being more secure in an airport than on the streets?

That’s how I would frame the argument.

I am trying to figure out just who those in a lather over stop & frisk are trying to “protect.” And from what?

I am aware that there are occasional “bad cops” who might abuse the procedure. I am also very aware that the vast majority use it as intended, to protect others and themselves.

Yeah, if you are diddy bopping down the street giving police officers the stink eye or flipping them the bird, well, yeah, you might get your dumb behind in jam. Good! You see, this isn’t all about “You” studnikky, it is about the rest of us.

If someone has presented themselves as a threat

Since when is walking down a street minding your own business a threat? Here’s the base line:

The right of the people to be secure in their persons, houses, papers, and effects, against unreasonable searches and seizures, shall not be violated, and no Warrants shall issue, but upon probable cause, supported by Oath or affirmation, and particularly describing the place to be searched, and the persons or things to be seized.

I’ve highlighted the relevant passages. If I’m a threat, the police are covered – I’ve handed them probable cause.

If I haven’t, then I’m going to say it is an unreasonable search. Feel free to tell me that walking down the street is a threat.

I could use a good laugh.

This is an unbelievably special ruling.

Appellate Courts seldom, if ever, admonish a judge in this manner (unless the judge is a far right conservative).

She must have been incredibly bad that even the 2nd Circuit (long-considered by Northeastern liberals to be the true Supreme Court) had to take this position.

For those of you who do not appreciate the significance of this ruling,this is a day to be very proud and thankful for our justice system. It still works, at least this time.

I agree. I just hope the ruling stands the future tests.

There are a lot of fools who think crime prevention is a violation of their rights. They never get it…it isn’t about “You” dimwit, it is about the rest of us in a given community.

Wish they’d refer to it as “Stop, Question and Frisk” … as “Stop and Frisk” seems to evoke a Pavlov’s dog response from the left …

The issue is not “stop and frisk”. The issue and the standard is probable cause.

Probable cause and commensurate force.