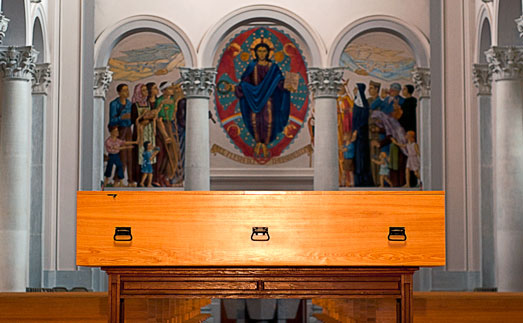 As we near the end of October, I thought this seemed like an appropriate free market success story to share:

When the state Board of Embalmers and Funeral Directors told the Benedictine monks of St. Joseph Abbey in southern Louisiana they could not sell their handcrafted caskets to the public, the normally peaceful order took the fight to court.

Hurricane Katrina had wiped out the order’s traditional income from selling timber, so the brothers decided to market the simple cypress boxes they had long built to bury monks who died. They were priced at $1,500 or $2,000, far less than a funeral home would charge.

But the state board, composed mostly of embalmers and funeral home directors, ordered the monks to stop.

Their five-year legal battle ended quietly at the Supreme Court last week with a defeat for state-enforced “economic protectionism” and a victory for small entrepreneurs.

It is part of a growing trend of successful “economic liberty” cases championed by the Institute for Justice, a libertarian legal group based in Arlington, Va.

The costs of a typical funeral have risen from about $700 in 1960 to over $7000 today.  It looks like as technologies have been developed or improved in this country, both life and death have gotten more expensive: 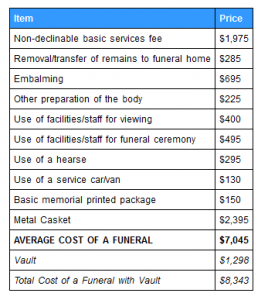 Putting a stake through the heart of the state board’s original ruling, to make life a little easier for cash-strapped Louisianans at a time of bereavement, was the right thing to do…both on a moral basis and a free market one.

The monks are expressing their gratitude for the victory appropriately:

The abbey had celebrated its previous legal victories, but Abbot Brown said they will likely mark the final milestone “quietly in our prayers.”

One of the chief elements of the Tea Party, which remains undead for another Halloween season, is empowering Americans to push-back on the stranglehold of regulatory control at the state and local levels.   It is good that a group of hard-working citizens got a little “economic justice” for a change.

Louisiana (or Deep French-speaking East Texas) has a history from its Louie P. Long Progressive days of PROFOUND over-regulation of business that has only worked to keep poor people poor and protect dinosaur business.

Nobody can articulate why “police powers” of the state benefit anybody by regulating florists, or coffin-making monks.

This a reminder as we bemoan the growth and overreach of Federal power, State power ain’t all its cracked up to be either. This a very good result.

You know, you would think that $1,975 would cover all the fees listed under it, except for the casket. What’s involved in this non-declinable fee? Are we paying undertakers $1,975 just because we walk in their doors and say we have a dead body? If a fee is non-declinable, the company ought to indicate exactly what costs you’re being hit with that cannot be declined. This is crazy!

It’s standard practice. You have to shop around a lot to find a funeral “home” that doesn’t have such a fee. Most funeral homes will charge you a fee if you purchase a casket online or at CostCo and have it delivered… one of the places we looked at for my grandfather wanted $600 if we purchased the casket off-site. Of course, if we purchased a grossly overpriced casket on-site, the fee would be “waived.” The whole funeral business is despicable. Most people are not in the state of mind to shop around looking for the best deal, and they take advantage of it in every way imaginable.

That fee is because in NOLA they can’t charge you for grave digging and site prep.

It’s a basic services fee that is separate and distinct from the basic funeral services that are provided? Are we being charged $1,975 for grieving and having a guy/woman in black speak to us in hushed tones?

I thought the “Institute for Justice” was the new and improved name for the American Trial Lawyers Association. Am I mistaken?

Growing up near a family in the funeral home business, it was always jokingly said that people were dying to get in. Good for the Monks!