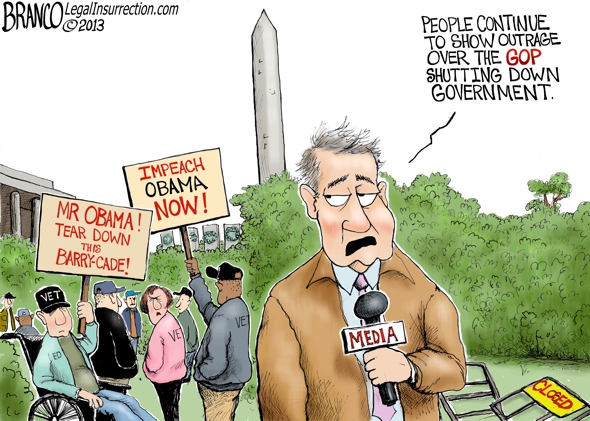 Obama’s Liberation Theology and his policies have dramatically decreased economic prosperity for blacks.

My favorite Branco cartoon yet!

Imagine if a Republican were in the White House and just a tiny, ragtag Cindy Sheehan group of a couple dozen people (2/3 of them reporters) had disgustedly deposited barricades outside the White House … those TV cameras would zoom in like Hubble telescopes and pan forever.

But, alas, to the great masses of low-info voters watching the MSM news … absolutely nothing happened in DC yesterday.

Thank you! I often receive inspiration from the comments under the current subjects posted on LI. Yours happen to be one of them this time. Thanks again.

The New York Daily News writers Joseph Straw, and Daniel Beekman wrote an article about the Memorial titled “GOPers storm WWII Memorial, in which they wrote “later moved to the WH and provoked a stern response from police when they climbed an iron fence that surrounds the presidential mansion.”

Funny, I watched the video yesterday as it was happening, and I never saw anybody climbing the fence. I saw riot police come in and get between the crowd, and the fence. I saw all kinds of armored swat vehicles on the road around, and I heard them denouncing this president. I did not see any violence, and the people kept on saying “keep calm” through out the rally.

The print edition has different wording than what is on-line edition.

Unfortunately this is not new. What is new is that Facebook and Twitter make it easier to get the truth out.

I am reminded of a Chicago Tribine picture of a demonstration outside a Hillary Clinton appearance when she was touring the nation promoting her version of National Health Care. There were a small group of college kids holding signs in the foreground with many more people holding signs behind them. If you pulled out a magnifying glass you could read that all the rest of the signs were against Hillarycare.

Then there was the Sore Loseman rally outside CNN’s HQ after the 2000 election. Their site showed a big image of Gore supporter with the blub about a demonstration about the Florida recount outside their offices. A friend was there and has photos from the other side of the plaza, Her photos show a couple of dozen Bush supporters picketing behind the one woman with her Gore sign.

If the media doesn’t turn on O for the O’Care debacle and the Spitehouse shutdown tantrum, we’ll just have to wait until 2017 for the “tell all” books to hit the shelves.

Now for those of us here is it not a shame that we recognize how good the cartoon is and what it means while most of the population would have absolutely no idea what it is about since they had absolutely no real news of what was going on.

Thank you all for the comments. It’s good to be back at the O’ drawing board after being on vacation.