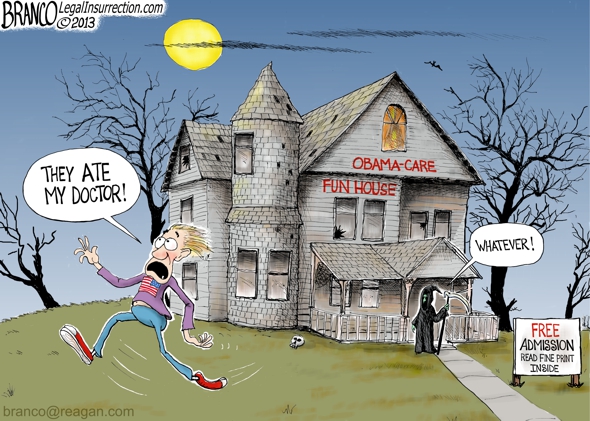 LMAO! The ‘dude’ is lucky HE didn’t get the same treatment..

Great work! That is a good likeness of Pelosi outside the house.

Sebelias (However her name is spelled)

ROFL! Love this one! So sharing!!!

31 days in and OBAMA-SCARE is should be the word of the day.

I think the “you can keep your Insurance plan” furor is VERY fundamental, but is going to pan out to nothing. Very fundamental because you have the POTUS repeatedly and emphatically telling an unequivocal, absolute lie –I don’t buy for a heart beat that he didn’t know the truth. A self serving lie with real consequences.

I think the furor is much ado about nothing for two reasons:

First–it only affects those who have individual plans. These are largely self employed, or employed by small business that don’t offer a plan. Fairly small segment of population. I doubt this sector was ever strongly in The One’s camp to begin with, although if he had been honest, it probably would have cost the ACA passage, less likely tipped the election. May have had little effect–I doubt a large number of these people believed him when he said it. I didn’t.

Second–I don’t think the kabuki dance in DC (either side) really cares all that much. I think it is in government’s DNA to want centralized power. Not suggesting any grand conspiracy–although in Obama & Co’s case, it is more explicit than usual. The DC level politician & bureaucrat only deals with government and large (really large) business. That is the world they inhabit–and switch back and forth between. They don’t really understand Jose’s Catering and Lawnmower repair, he doesn’t contribute to their campaigns, arrange insider trading deals, rides on his jet, etc. If they lose an election, they won’t land a cushy job with him. They can control (and are controlled by) GE, Goldman Sachs, etc. Jose–he is a wild animal in their book.

I think most of the goings on are pro forma. The character in the Branco cartoon saying “whatever’ captures it, IMO.

The real problem with Obamacare will become apparent with increased utilization. By that time, Obama will be playing golf full time. Hillary may be in office, or may not. I don’t think he cares much.

That one pretty much sums up the whole obamacare deal.