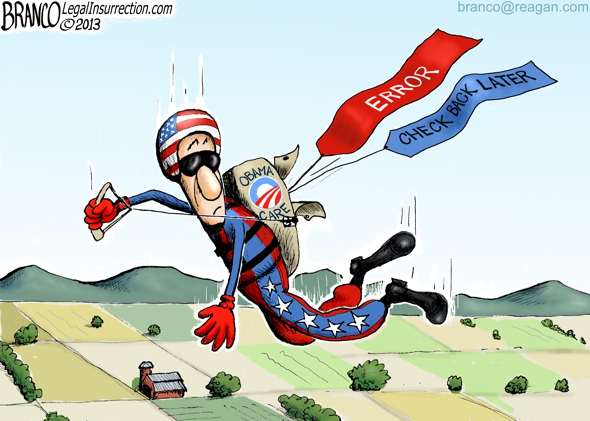 Cause, after all, it’s not like medical care is a life and death issue…oh. wait.

What do you expect from a health plan that has FU*KYO for a phone number and DOYOUGOTINSURANCE.COM for a website?

A sample of the inane chat conversation at the Obamacare site is more proof that this administration and its operatives do not operate in the realm of reality, logic, reason and responsibility.

Obama – the lawless president, presiding over an administration of crooks and cronies – among them the chief Republican leadership!!!

Both parties are shameful and should be thrown out of office and sent to jail, their salaries, assets, etc. garnished until the National Debt is paid off.

Those who voted for Obama should lose their benefits and/or citizenship.

Fantastic! Still, the ACA is one huge Oops!

GET A LOAD OF THIS!

“…Obamacare is a Hacker’s Wet Dream”

Some of the other good articles there on this disaster.

He could have another tag saying:

Wait until there’s a glitch with Obama’s teleprompter and he has to talk off the cuff in front of an audience.

I wouldn’t be surprised if he weaves a yawn yarn about Republicans driving ObamaCare into a giant glitch, and, while the slurpee-drinking racists watch Obama & Co. struggling to get the car out of the glitch, they obnoxiously ask for the keys back.

The Titanic had a glitch. Obamacare is a disaster.