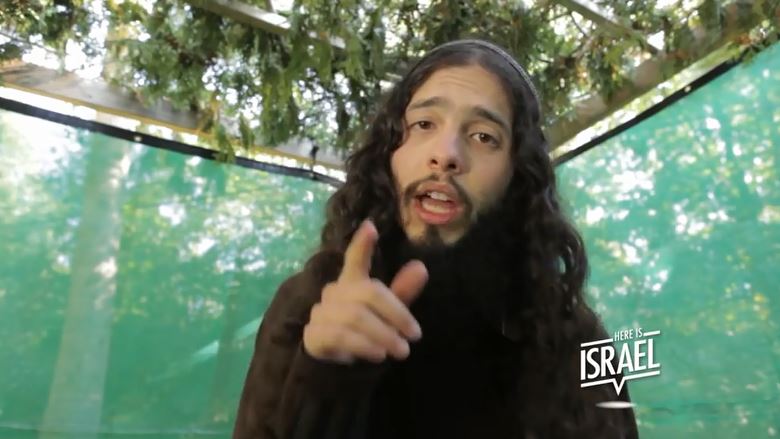 The Boycott, Divestment and Sanction (BDS) movement, as our readers know, is a vile combination of leftists and Islamists joined together by hatred of Israel who hide behind false and exaggerated claims regarding the “occupation,” when the real goal is the destruction of Israel.

The BDS movement, which includes many academics, singles out Israel and only Israel, ignoring far worse human rights conditions in countries that are not under threat of suicide-bombings and destruction.

It is no surprise that the BDS movement, while claiming to be non-violent, often is the impetus for violence against Jews, particularly in Europe. The excessive and unique demonization of Israel is inextricably linked to the rise of anti-Semitism in Europe.

A Jewish rapper has created a rap song titled “Boycott Israel” that very persuasively exposes the hypocrisy of the BDS movement:

The Times of Israel explains the background:

A political science BA from the University of Oregon, the 27-year-old ba’al tshuva reggae rapper is probably the only musician around capable of undertaking the long hours of research involved in making the extremely informative, catchy six-minute song.

“Boycott Israel,” sponsored by the pro-Israel campus advocacy group Here Is Israel (with the motto “get HII for Israel”), is a fascinating, rhythmically rhymed exposure of the double standards involved in the global BDS (Boycott, Divest, Sanction) efforts against Israel.

The fledgling organization, actively running since July, is trying to create content to appeal to US college students, says Lesser from his Cleveland home.

“The campus can be a rough place for Jews and Israel, I’ve experienced that first hand. There’s definitely some intense stuff out there.”

Back atcha, lefties and islamists, your glass houses aren’t stoneproof.

Wowza. First rap song I ever liked — and I REALLY like it!

I enjoyed that but just because you can make it rhyme doesn’t mean you have to give it time. If we’re talking hypocrisy then let’s use the word “apartheid” when talking about Israel’s election process.

Not agreeing with Israel is not anti-Semitism. Big influence pulling one way requires big response pulling the other. I will boycott Israel.

Israel and the Apartheid Slander

One particularly pernicious and enduring canard that is surfacing again is that Israel pursues “apartheid” policies.
…
While “apartheid” can have broader meaning, its use is meant to evoke the situation in pre-1994 South Africa. It is an unfair and inaccurate slander against Israel, calculated to retard rather than advance peace negotiations.

Trying to remove a word from your vocabulary or dictate its meaning for political purposes is a tactic of The Left.

From dictionary.com
Apartheid: any system or practice that separates people according to race, caste, etc.

So every single Arab and Islamic state is an Apartheid state under your definition — so I presume you are boycotting them all.

As soon as they try and force us into a war with Iran, or otherwise dictate U.S. Foreign policy, I’m won’t be buying any of their pistachios.

Okay, I see what we have here. Your first comment gave it away. Next you’ll tell me Israel was behind 9-11 to provoke us into invading Arab countries. That is what you think, isn’t it?

William, dude, (I can call you “William,” can’t I?) trying to trivialize an argument is an amateur’s move. I know this is your board – suck it up.

I’ll take that as a non-denial on conspiracy theories involving Israel. You’re off the charts. Bye-bye.

Exactly. Israel does not practice apartheid. Its citizens, Jewish, Muslim, Christian, etc. have equal standing in their society. Perhaps you are referring to the people living in the Gaza Strip and West Bank. If so, then they operate within a jurisdiction independent and outside of Israel.

“If we’re talking hypocrisy then let’s use the word “apartheid” when talking about Israel’s election process. – ”

You mean how Israeli Arabs have full political rights, get elected to the Israeli parliament and sit on the Israeli supreme court?

Not agreeing with Israel isn’t necessarily anti-semitism, but ignoring reality so you can hold the Jewish state to a standard that you don’t hold others, as the song says, is not just hypocritical, but indistinguishable from Jew-hatred. Like Bob Marley sang, let them cap fit who they wear it.

When you complain as loudly about the law in the Palestinian Authority that makes it a capital crime to sell land to a Jew, I’ll consider that you don’t have Jews on the brain.

Boycott and divest idiots and their ideas!

Me and every country in the U.N. Assembly but 8 disagree with your characterization of the situation, but hey, you’re probably getting your info directly from God.

You’re using the United Nations as a standard for morality? If you really are a lawyer, you’re missing your true calling doing absurdist comedy.

Nice to know that you willingly sit with North Korea and Robert Mugabe. Since you share Mugabe’s feelings towards Jews, do you also share his beliefs about gays?

am I spelling shmuck correctly? ‘cos that’s what you are!

Give me a list of the Muslim countries that have Jews in the government, especially Jews who indulge in anti-Islamic rants.

Hypocrisy because they Care.

Ari makes it very clear that he is referring to abortion ONLY when the life of the mother is in danger, and that it’s still denied even in those cases in Chile.

You can check out the actual Youtube page to see Ari’s comments.

I recognize his qualification, agree with it, and did not criticize him on that point. My intent was to emphasize the importance and prioritize the relevance of a particular “social” issue.

Yes, but abortion “rights” is a huge issue for the lefties, including the bds crowd.

Medical science has evolved to such a point that this “life of the mother” scenario is a rarity. What it does is provide an excuse for baby-killing. Doctors don’t need abortion laws to terminate ectopic pregnancies, which are genuine “life of the mother” cases. Even women with eclampsia and other serious health problems don’t abort their babies. They take the meds and the bed rest. A baby would have to have its hands around its mother’s throat for a doctor to terminate for “life of the mother” reasons.

I dunno. He doesn’t look Jewish to me. :O

Did I miss France and England? I’ll have to listen again. I’m disappointed. He left out a lot of countries. Nobody gets out alive on this one. Come on, think, Norway, Sweden, Switzerland, I didn’t hear those. Iceland. Canada. Every one is guilty of something. Britain came directly here to kick our butts twice. Burned our capitol.

American individuals can’t technically boycott some of these nations because they are under sanctions. I agree with that policy, but I hope one day I will be able to visit Cuba and Iran, and that they will be free.
It’s easy to boycott Israel because it’s a free country with enterprising population. There actually Israeli products on the market. Compare it to Russia, a country that gays tried to boycott (and I am not in support of boycotting Russian business) and couldn’t find a consumer product to fit their qualifications. Good luck with Saudi Arabia or Belarus.
I do have an Afghan rug in my living room, purchased from a local Afghan business man. It was rather a bargain… We buy Chilean wines, too, they can be quite delicious. But then again, I buy Israeli products (mostly cosmetics, jewelry and food) whenever I can.

Wei needs to include a line in that song. BDS would only happen if all those countries mysteriously became Jewish.

Last Christmas and Hanukkah, I bought everyone a Sodastream, which is made in Israel using Palestinian workers brought in every day from the PA.

I also buy the hell out of Israeli-made weapons, when I can. “Hey cock-a-roooch! Say-hello-to-mylittlefriend, Jericho!”