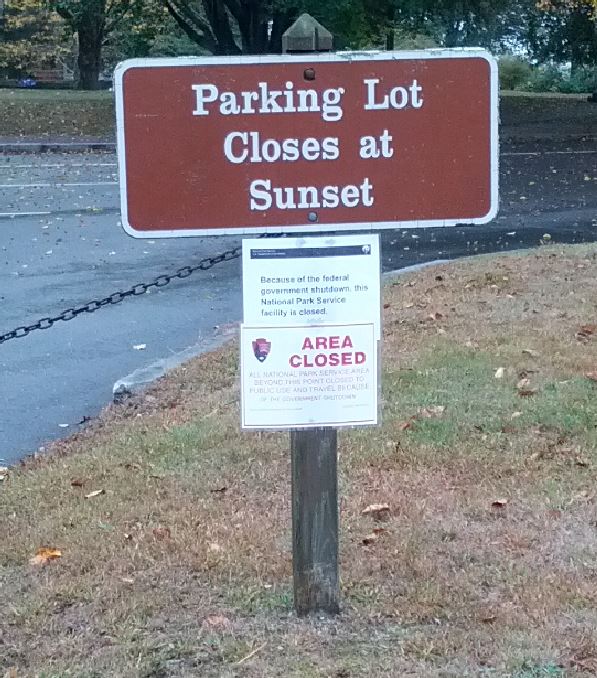 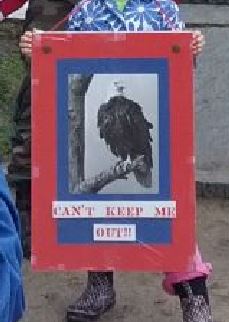 A reader would not be stopped, and writes, quoting Ralph Waldo Emerson’s poem about the “rude bridge”:

“By the rude bridge that arched the flood
Their flag to April’s breeze unfurled,
Here once the embattled farmers stood
And fired the shot heard ’round the world.”

Yes, that too is shut down… and, thanks to a comment left at eddriscoll.com, several of us were there today.

We didn’t bring a photographer, and it was raining, but we spent over an hour there, swapping stories and greeting the occasional tourists. You’ll probably get other photos from some of the other people there.

It was a special feeling, to stand on that ‘rude bridge’, imagining the Patriots gathering to stand against British regulars.

The feeling was all the stronger, knowing that our own government — we fought a war, which started right here, to establish that government! — was telling us that we couldn’t visit here because it was necessary to require us to pay a Federal healthcare tax… and was trying to deprive us of our guns besides.

And sent along these photos: 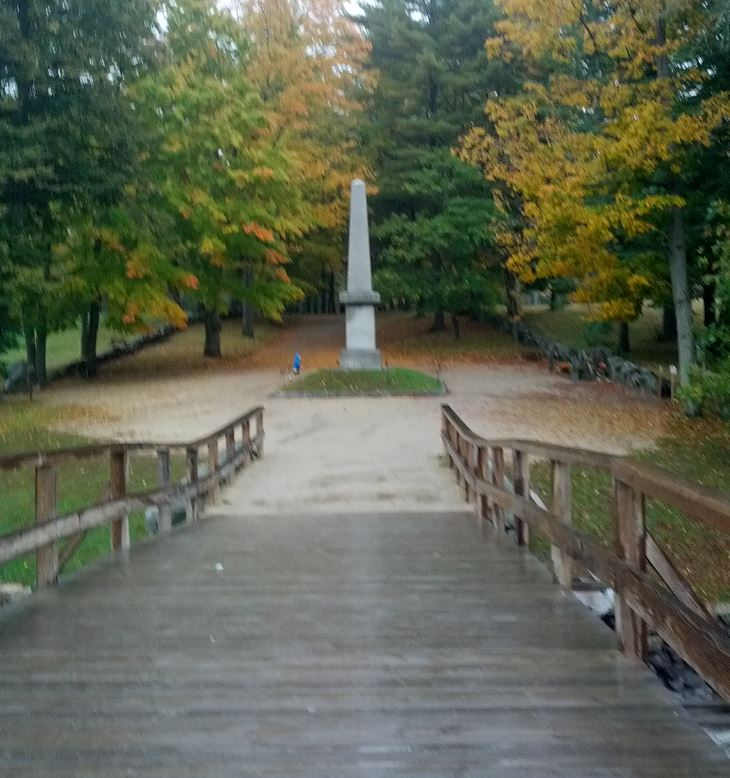 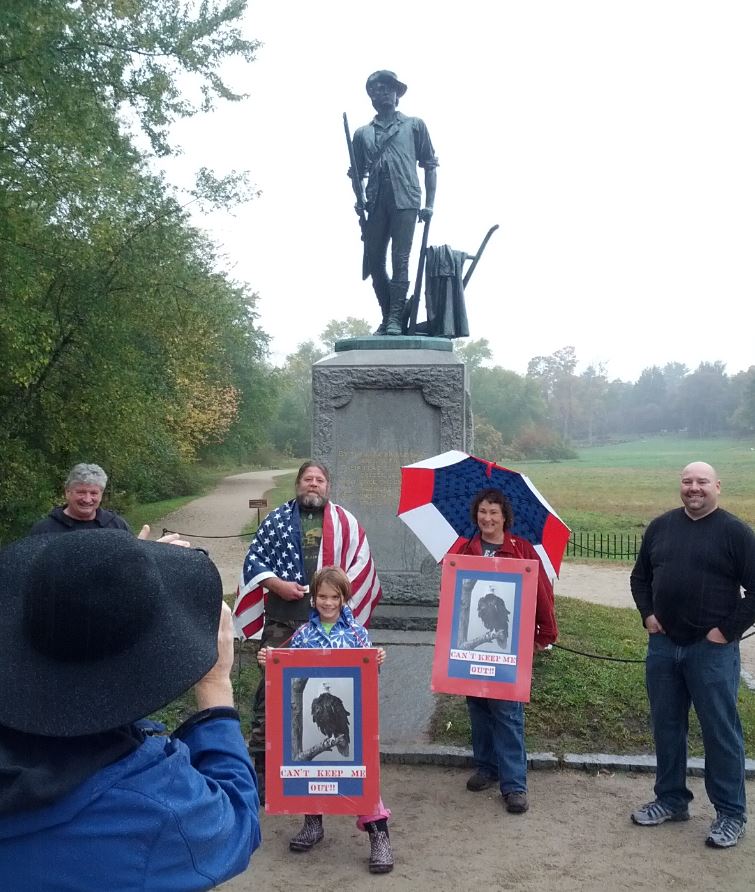 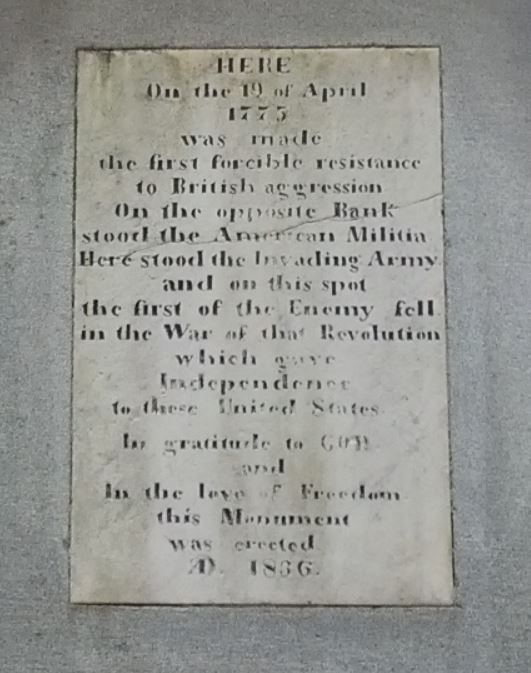 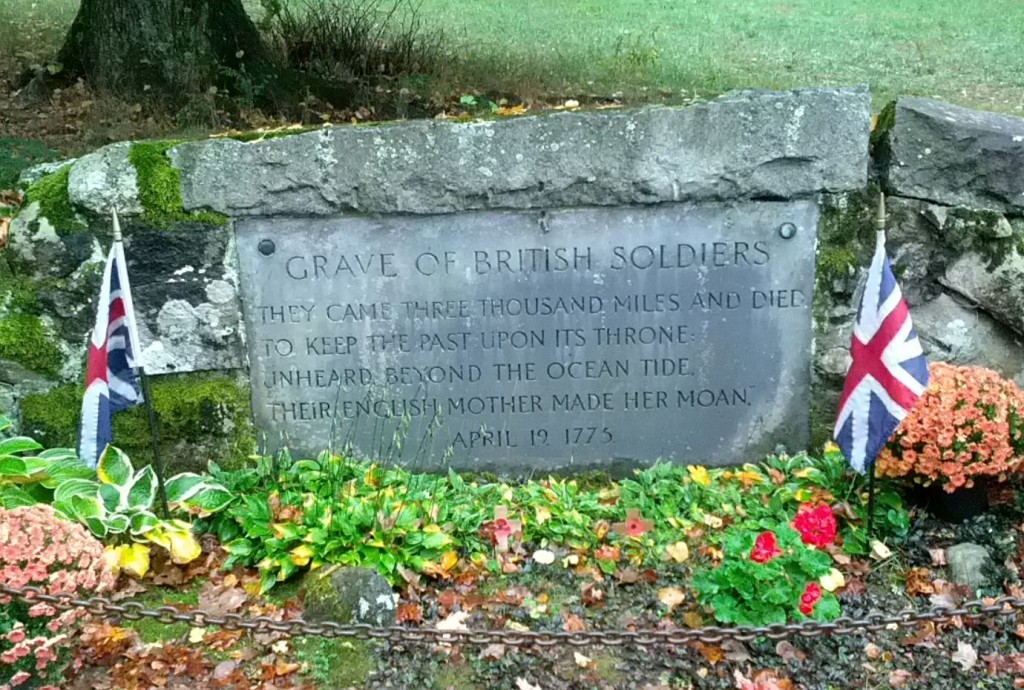 [*Note- my bad on spelling of park, it’s Minute Man, not Minuteman, which would refer to a person. Corrected now.]

True patriots understand when it right to civilly disobey the government.

I suppose that is the entire premise of this blog, given its title.

I have a copy of “Civil Disobedience” that I printed out a number of years ago in a drawer on my bedside table, right next to my firearm.

I am a free man living in the United States of America, and by God, I will not submit to the forces of evil that pretend to the “throne” of our government.

All that occurs today was foretold as far back as De Tocqueville. That does not mean that the outcome cannot be in the spirit of Madison and Jefferson, as opposed to Marx and Engels.

Obama will come to rue the day that he ever set his sights upon the White House.

In the 60’s the lefties had their civil disobedience and were plainly not very civil. It’s around fifty years later and the lefties control everything they railed against and are still not very civil.
As Yakov Smirnoff used to say : What A Country!

The more of these stories the better.

But there’s an important question: Are the people who do this those who would not support Obama anyway, or is there really a growing popular anger that the media is missing?

I pray it’s the second one.

I don’t know about the activists, but there is growing anger from non activists. A lot of people around here depend upon the fall color season for tourist dollars. The closing of the ntional park and the privately owned Pisgah Inn as well as the uncertainty about the Blue Ridge Parkway is really ticking people off.

The parkway itself is open but the toursit centers, picnic grounds and overlooks are closed. They have always let people pull over on the shoulder where ever there is room, but without the port-a-potties one has to plan ahead. Some of the exits are miles from facilities.

Florida Bay and Key Biscayne, which the Obama administration have closed, are in Obama Country. (What they’re closing; counties which voted Democrat.)

They announced the closing on Friday, and weekends are prime time for all the charter boat operators and tour guides down there. A lot of small businesses will be hurting – but whether they blame the folks who actually decided to shut them down, or take the media’s cue and blame the GOP, remains to be seen.

He wants his loyal supporters to feel enough pain that they will fetch their pitchforks and march where he tells them to march.

My wife and I are headed to the mountains for a week beginning Oct 18th and our ‘base’ will be Boone, NC. I’ve already warned her I will not pass up a chance at civil disobedience and will park bail money with her to get me out if necessary.

National Public Radio is trying like hell to push the notion that this entire shutdown thing is all Boehner’s fault. The media just hasn’t, according to them, done a good enough job of explaining.

Government by malice will teach more and more of us to resist.

It is an irresistible force from all the evidence of history.

Except is not heard around the world.

Every nation is allowed their fantasies . This one about being so brave so free has come to this.

I don’t think there are words to describe how pathetic this all is.

Luckily for you no one knows about it.

This is one of the few things that makes me wish I still lived in Massachusetts. Moved south for lower taxes and less regulation–more liberty–and the weather. Yet Massachusetts will always be home, and I’m not eloquent enough to describe how comforting it is when I hear that there are still freedom-loving people back home.

Would it be a bad idea if a nationwide protest at national monuments and parks could be arranged. Could ask people to tour their nearest barrycaded park or monument. If we get arrested, let them government do with us what they will.

I lived [past tense] in MA for 20+ years, and believe me, I do not regret moving out one iota. Would you really want to be represented by Lieawatha? That place is prog hell …. my only connection now is that I continue to follow the Sox.

Someone needs to get a wrecker, attach a chain to the gates and rip the shit out.

Agreed. Only make it a hundred wreckers or ever how many park closures there are.

As I posted above, my wife and I headed soon to the Blue Ridge Mts and if this petty crap is still going on, I will do something in the line of ‘civil disobedience’. I don’t own a tow truck but I did convince my wife we’ll take my 4WD truck instead of her sedan. I can afford any charges.

Thank you to your readers who did this, and thanks for sharing the photos!

I am starting to believe WTell is right!!! How much more of this crap will it take to wake u the populous?….if the park rangers can inflict this much angst, what happens when if the military ever took action?

“A Government Big Enough to Give You Everything You Want is Powerful Enough to Take Everything You Have” — Thomas Jefferson
Seemed apt. Especially seeing as these same people will be in charge of our healthcare.

If the “republicans” give in this time, then next time he hopes to be able to order the closure of health care facilities until he gets his wish.

Obama is betting that the GOP will be blamed for these gross annoyances to the American people. He has forgotten that we live in the age of Twitter, Twitchy, and Facebook. By the time his world of hurt on the American people is done, so will the Democrat party.

One can hope. Is there no one decent and rational left in the party?

The National Park Service’s image may finally be catching up with reality. I have read that some of their parks are run much like feudal duchies, but because of their benign image no one ever pays much attention. That is about to end.

In the Southwest, the NPS will not allow law enforcement to close human smuggle routes through their domain.