Amnesty is the new government shutdown

Amnesty is the new government shutdown 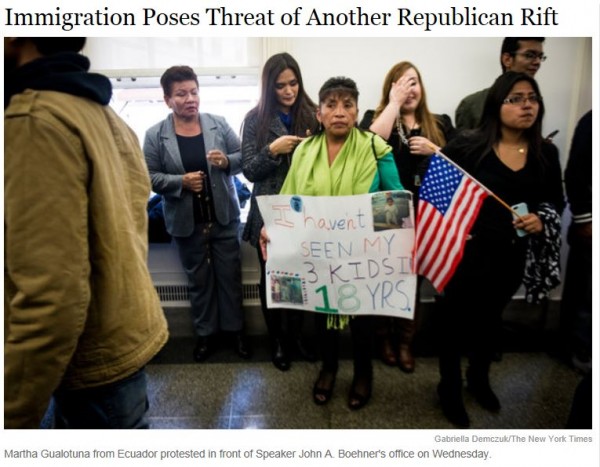 The media is already salivating, Immigration Poses Threat of Another Republican Rift:

A push to bring immigration legislation to the House floor, led by an unusual coalition of business executives, prominent conservatives and evangelical leaders, threatens to create another schism in the Republican Party and could have a noticeable effect on campaign contributions before the midterm elections.

Several Republican executives and donors who are part of a lobbying blitz coming to Capitol Hill next week said they were considering withholding, or had already decided to withhold, future financial support to Republican lawmakers they believe are obstructing progress on immigration.

“I respect people’s views and concerns about the fact that we have a situation in the United States where we have millions of undocumented immigrants,” said Justin Sayfie, a lawyer from Florida who said he helped Mitt Romney raise more than $100,000 for his presidential campaign last year, in addition to helping other Republican candidates. “But we have what we have. This is October 2013. And the country will be better off if we fix it.”

In reality, the split, rift and schism is mostly over one issue: Amnesty.

Republican business interests and money men are willing to give amnesty in order to obtain other non-controversial immigration reforms.

And in so doing, the Republican business interests and money men make it less likely they will get anything.

Because if Republicans sign on to amnesty, it will make the prior split, rift and schism look like child’s play.

Which is precisely why Obama and Democrats are pivoting to immigration “reform.”

Our immigration system IS broken.

And never more so than now, after the Obamabanana Republic made a concerted effort to BREAK IT by breaking the lawssss.

Compare it to any VIABLE nation on earth, and it is a joke. Nobody in the world has a system as permissive as ours (IMNHO).

And there is NO record in history or currently showing any amnesty program ANYWHERE has EVER worked.

So, the only RATIONAL way to fix our broken system is to address its various problems but NEVER offer amnesty for illegal…or low-intensity…invaders.

The system is broken only because the laws are not enforced. If the laws are enforced as currently written, you would be surprised by how well the system works.

Couple of areas of disagreement…

2. it is also broken in the sense we provide perverse incentives to come here and benefit by “entitlement” programs

3. it is further broken in that our LEGAL immigration systems are typical government kludge that could be made MUCH less bureaucratic and difficult

3. it is further broken in that our LEGAL immigration systems are typical government kludge that could be made MUCH less bureaucratic and difficult

I can’t wait to see what they come up with to fix that when it all comes crashing down.

Immigration law does need some changes, but the changes I would make would not appeal to most politicians:

1. Do away with “anchor babies”. If your parents are not in the U.S. legally, you are not a citizen just because you are born here. If a constitutional amendment is needed, let’s do it.
2. No more priority for legal immigration because your 3rd cousin is here. Priority should go to those who will be best for the U.S. as a whole. Only spouses and dependent children get priority based on family relationships.
3. Enforce, really enforce, laws prohibiting employment of illegal aliens. They won’t come and won’t stay if they can’t work.

There are probably more, but the above would be a good start.

Eliminate all benefits for illegals.
Make Illegal immigration a felony with years in prison as punishment.
Make providing aid, including sanctuaries a felony.
Dedicate a large portion of the FBI to hunting down illegals.
Require a SSN for all government benefits and make it a felony to use an illegal SSN.

If they followed American law none of that would happen, Rags.

The USA admits more legal immigrants than the REST OF THE WORLD COMBINED! So, get in line like our ancestors did.

The last estimate I heard was that Amnesty would cost TRILLIONS of dollars in new transfer payments. So, tell the current welfare recipients that they will have to share.

Let the Dems die on that hill. Americans are unemployed. America is deeply in debt. We don’t need 11,000,000 additions to the welfare rolls. We don’t need to be subsidizing somebody’s new and middle class lifestyle in another country whose government is too corrupt to take care of its people. We don’t need to continue giving taxpayer money to people who don’t respect our country, our flag, our laws, and who make demands of us that they have no right to make. Any GOPer who writes a bill rewarding law breaking and disrespect fir the United States out to be voted out if office. That means you, Paul Ryan and Darrell Issa.

This should be a make or break issue for most true conservative Republicans. Why vote for a Rhino who is just going to be a Democrat-lite. It can be a real wedge issue for someone to run a populist conservative movement.

But what do I know. People tell me I am a No-nothing…wait a minute!

This should be a make or break issue for most true conservative Republicans. Why vote for a Rhino who is just going to be a Democrat-lite. It can be a real wedge issue for someone to run a populist conservative movement.

But what do I know. People tell me I am a No-nothing…wait a minute!

I was speaking rhetorically.

I suppose you can dive into the weeds, and debate the “Policy Schism of the Week”…brought to you by…

To me, the real “schism” lies in the governing philosophy of the Republican Party.

Are the republicans going to become democrats? Does John Boehner want to be a moderate Nancy Pelosi?

I say yes. Yes, they want to become the democrats of old. But, it just doesn’t feel right, not at the moment.

My theory is that the Democrat Party is now the Socialist Party, leaving a power vacuum in what today’s republicans now view as “the middle”.

It explains why the tea party movement is so hated by the GOP establishment; it acts as their conscience, reminding them of who they said they were going to be, who they ought to be. Which is, right of center. NOT right of socialism/communism.

So, whatever flavor the of the week the commies want to trot out has nothing to do with policy. It has everything to do with moving the republican party left. So far, so good.

“Oppose free trade buy American.” That is the equivalent statement of those who would favor protectionist trade policies, e.g., high tariffs, over free trade. The libertarian viewpoint is that absent government incentives e.g., public assistance then restrictions on immigration are no different than trade restrictions. That is the one caveat that forces me to oppose amnesty at this time and to favor a narrower door to entry. But that problem is a state problem not a problem of individual to individual in voluntary exchange. BTW could you imagine John McCain giving the above statement? Now think for a moment and imagine Rand Paul giving that statement. Not difficult. That is the schism one is political and one is principled. We see this time and again with the political favored over the principled. One is considered smart and savvy and one is considered naïve.

Senora: Focus, por favor: Why the Poopy is that America’s problemo???

yeah, whats stopping her from going back to wherever and seeing them?
other than the fact she may not be able to re-enter here.
I see no downside to her visiting her kids…..she should do so now.

No, but I understand he tripped because he was backpedaling too fast.

Okay, I know I’m the caboose in this train, but—

If there are any experts here on U.S. law on territories, please chime in.

I believe the solution which would make almost everyone happy is to create military divisions of illegal aliens (Mexicans only) and use them to invade Mexico, install martial law, render it a territory, or whatever would NOT permit Mexicans to vote on U.S. matters, and install TSA-style security along the entire 2,000 mile border.

THEN, allow as many as you wanted 6 month visas to work here, if they have a SPONSOR who would pay all costs including education, medical, everything. And use Mexicans to round up Mexicans who violated the visas, and ship the violators home.

Something along these lines.

Business could get “cheap” labor. We could get these people to go home, as with martial law, we could install decent, not corrupt government.

Perhaps legalize marijuana to take some of the power out of the cartels. Tax it and sell it at pharmacies and convenience stores.

Another red herring thrown out to sow discord and division among Republicans.

The simple fact is there isn’t time to put together a bill that could pass the House in the time left in the session.