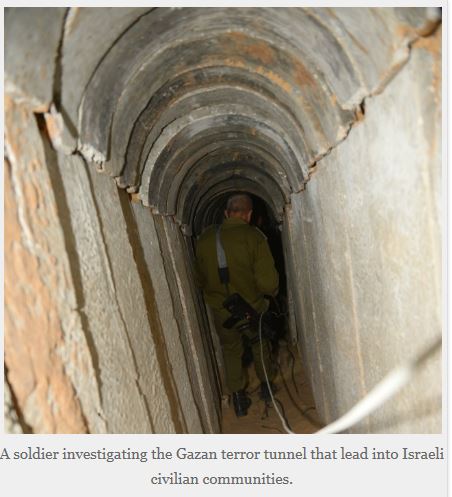 When you read the first few news dispatches below from the past year and a half, keep this photo in mind.

Fifty international aid groups and United Nations agencies urged Israel on Thursday to open Gaza’s borders, saying its border blockade violates international law and indiscriminately harms Gaza’s 1.6 million people. The appeal was issued on the fifth anniversary of the imposition of the blockade, a response to the takeover of Gaza by the Islamic militant group Hamas in 2007.

In addition, Israel has maintained a strict naval blockade on the coastal strip, saying it is essential to prevent weapons smuggling. 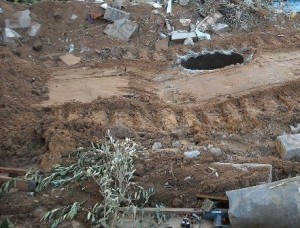 This is an arbitrary sampling, but you get the idea. Israel’s blockade disproportionately hurts Gaza civilians. Israel claims (but apparently no one else believes this) that Hamas would take advantage of relaxed restrictions use it for terror.

As of now, the New York Times, whose website hosted the three items above, hasn’t reported yet, but last week Israel discovered another smuggling tunnel under its territory. The Times of Israel reported:

Security forces last week discovered the terminus of the tunnel some 300 meters inside Israel proper, near Kibbutz Ein Hashlosha in the western Negev, and took several days to render the passage unusable. The IDF said Sunday it had been aware of the tunnel effort for some time, but had not previously found its exit point.

Maj. Gen. Shlomo Turgeman, the Southern Command head, said the tunnel, “a violation of our sovereignty,” had been built using around 500 tons of cement that “Israel allowed in [to Gaza] for civilian well-being.”

The tunnel, which began in Abbasan al-Saghira, a farming village near Khan Yunis, was described by officials as being 18 meters deep and 1,700 meters long. Officials estimate it took around a year to construct.

Brig. Gen. Mickey Edelstein, Commander of the Gaza Division: “The IDF operates under the notion that there are additional tunnels jeopardizing civilians and security personnel in the area”.

The tunnel was built with approximately 500 tons of cement and concrete. Hamas and other terror organizations in the strip invest millions of dollars and resources in order to operate a thriving network of illegal tunnels leading into Israel. Sufficient evidence suggests that terrorists methodically abuse construction materials transferred into the strip by Israel as humanitarian aid in order to build such tunnels.

(See below, for a video showing how the IDF trains to combat these tunnels. From the little they show, I imagine that the soldiers of the Yahalom or Diamond unit, are likely trained engineers in addition to being combat soldiers.)

Prime Minister Netanyahu issued a statement ahead today’s weekly cabinet meeting addressing the discovery of the tunnel and the recent increase in terror Israel has been seeing:

“I would like to praise the soldiers of the IDF for uncovering the terrorist tunnel from Gaza. This is part of our policy – an aggressive policy against terrorism, including preventive action, intelligence, initiated action, responsive action and, of course, Operation Pillar of Defense. The combination of all these actions and our policy has led to the fact that this year has been the quietest in over a decade. However, we have witnessed an increase in terrorist actions in recent weeks.

We are currently checking the recent incident in the Jordan Valley, the murder of Sraya Ofer. I remember him as a child; he was in my brother Ido’s class and was a frequent visitor at our home. He was a mature, serious boy who afterwards, during his military service, contributed greatly to the IDF and the security of the state. We send our condolences to the Ofer family.

From all of this two conclusions can be drawn. The first is that Israel’s concerns about dual use items being used for terror, is very real. If, despite the blockade, Hamas was able to smuggle at least 500 tons of concrete, how much more would it have smuggled in with no restrictions? Also if building materials are so rare in Gaza, it speaks volumes about Hamas’s priorities and intentions that this huge amount of concrete was not used rebuild infrastructure. It recalls a sewage spill in Gaza some years ago, which was caused by Hamas taking the pipes and making them into rockets. Naturally this became one more cause for the international community to rally around the people of Gaza, ignoring that it was Gaza’s rulers who had caused the catastrophe in the first place.

“…(but apparently no one else believes this) that Hamas would take advantage of relaxed restrictions use it for terror.”

Sorry, professor. Everyone believes that Arabs in Gaza will use relaxed restrictions for more horrific attacks on civilians (contravening all international norms of civility). It is just that many people, particularly at the NY Times, approve of the violence.

Iconotastic, I was writing ironically there.

Apologies for not reading the byline and not giving you the proper credit for a good article.

Your irony was a bit too subtle for me. My failing, not yours!

Typical. They would rather destroy and kill than build and thrive.

(From the little they show, I imagine that the soldiers of the Yahalom or Diamond unit, are likely trained engineers in addition to being combat soldiers.)

The Jewish SeaBee battalions need their own Special Ops?

That sounds a little – weird.

[…] can make an educated guess at the answer, especially when reading David Gerstman at Legal Insurrection who gives us a list of international media articles over the year urging Israel to ease the Gaza […]