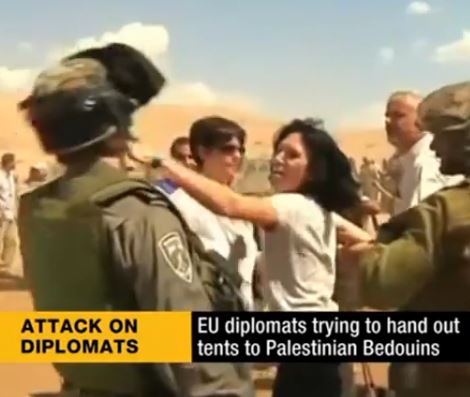 The EU is all up on arms because a French diplomat supposedly was roughed up by Israeli soldiers.

The background is that the Israeli Supreme Court — which often sides against the Israeli military — upheld the demolition of a Palestinian encampment built in the Jordan Valley in the West Bank without a permit.

A group of Palestinian activists assisted by European activists, including some diplomats, then sent trucks with supplies to reestablish the encampment.

The posse was accompanied by the usual phalanx of photographers and videographers, some wearing UN vests, because the purpose was to provoke a confrontation which would be a YouTube hit.

And so it was.  The YouTube moment was when French diplomat Marion Castaing fell to the ground and the photo was broadcast around the world as her being assaulted by Israeli troops.

“They dragged me out of the truck and forced me to the ground with no regard for my diplomatic immunity,” French diplomat Marion Castaing said.

“This is how international law is being respected here,” she said, covered with dust.

The IDF stated that “reports that foreign diplomats abused their diplomatic privileges are currently being reviewed, and if required, complaints will be filed with the relevant authorities.” 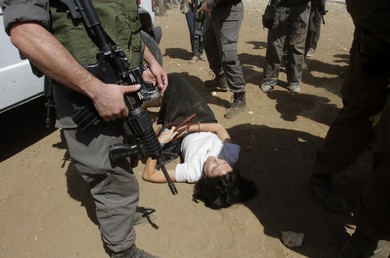 But is that really what happened?  Was she really “dragged” from the vehicle and “forced” to the ground?

In an Iranian Press TV report (at 0.35), Castaing is seen on the driver’s side with soldiers talking with her calmly. 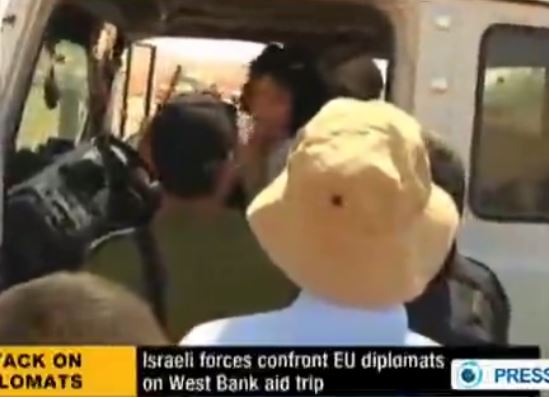 A fairly complete raw video is posted here.  You can see the mayhem created by the protesters.

I have excerpted the relevant part. The excerpt starts with a view from the driver, and there is no evidence Castaing is being hit or physically assaulted.

The camera then moves around the rear to the passenger side, and you see Castaing being removed from the vehicle.

There is no evidence of the Israeli soldiers hitting her or beating her or otherwise forcing her to the ground.

Instead, Castaing appears to fall to the ground on her own as the Israeli soldier try to hold her up.

Here is a screen capture as the soldiers try to prevent her from falling the ground.  They are not pushing her to the ground, but trying to hold her up. 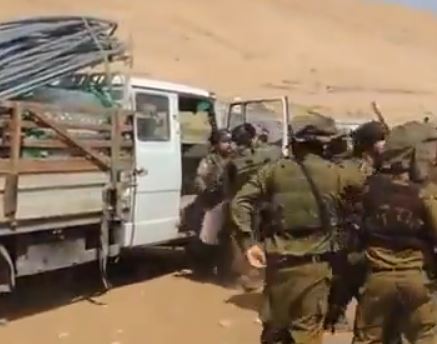 This Reuters photo (via Ynet) misleadingly is captioned “French diplomat dragged out of truck,” while the video makes clear it is soldiers trying to keep her from dropping to the ground after she already was outside the vehicle: 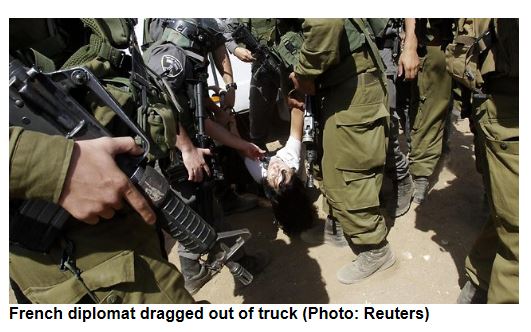 Castaing then stayed on the ground for a few seconds, during which photographers rushed to take her photo.

In another video posted online, you can see that Castaing started off on the driver’s side, men left the passenger side without being pulled out — the video then cuts away and Castaing is not seen again until she is on the ground.  At the 2:50 mark, a soldier tries to lift her off the ground, but she pulls her arm back and stays on the ground.

Castaing then got up and punched one of the soldiers in the face, as seen in this excerpt from the Iranian TV report:

Among the many inflated claims, Israeli soldiers also are accused of pointing a gun at Castaing.  On the IDF’s official blog (h/t Israel Matzav), the IDF has the following to say (backed up by photo evidence):

The photo us (led to spread this misinformation was taken as a screenshot  from a video with footage clearly showing that Marion Castaing was  neither physically dragged to the floor nor had guns pointed at her.  Also, the photo clearly shows that the officer is holding his gun by the magazine, nowhere near the rifle’s grip.

Video is not always conclusive.  A lot depends on camera angle.

Multiple video angles and raw video contradict the French diplomat’s claims that she was roughed up by Israeli soldiers.

There is a larger question, of course.  Why are European diplomats acting as provocateurs rather than diplomats?  Do Israeli diplomats in Paris participate in demonstrations against the French government?

How would France react if an Israeli diplomat led protesters attempting to circumvent a French judiciary ruling and then punched a French policeman in the face?

Update 9-22-2013: Via Haaretz, this description of Castaing’s conduct by the Israeli Foreign Ministry is consistent with our video analysis:

The Foreign Ministry said that videos of the incident show the Border Policemen and Israel Defense Forces soldiers at the scene did not exert any force against Castaing….

The Foreign Ministry also said that Castaing refused a police request to get out of the Palestinian truck in which she was sitting, and when she eventually did get out, she laid herself on the ground and refused to move.

Also, BBC Watch has the screenshot showing Castaing exiting the truck standing up — not being dragged out and pushed down. 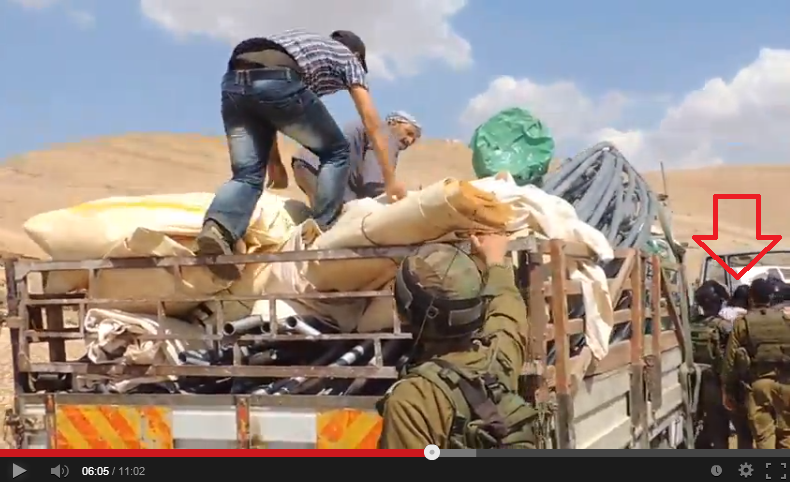 I think we’ve seen enough from the multiple videos from several angles to declare that this was staged by Castaing for dramatic effect. She exited the truck standing up, deliberately dropped down to the ground as the Israeli soldiers tried to hold her upright, she then stayed on the ground long enough for a photo op, then got up and punched an Israeli soldier in the face.

She’s not a diplomat, she’s an activist and should be treated as such.

This “news” no longer makes the front pages. Lucky the lady didn’t say “and, a number of soldiers fell on me and raped me.” I wonder “why not?”

If you’re making a YouTube video the least she could have done was removed her panties and thrown her skirt over her head, before she laid down on the ground.

What happens when the palestinians discover they are no longer news makers?

Besides, Syria vomited out two million refugees all living in new refugee camps. Where I think they will stay.

The action’s moved on.

And, Obama is not involved. Which is one reason the news from there goes nowhere.

Tell the lie long enough. Is that what the EU wants?

I’ve had it up to here with pallywood propaganda. It has been exposed as hoax enough times that anyone ought to take no more than a moment to realize this is puffed up.

But, like Oberlin’s great racial hoax of 2013, I’m sure the EU will slide the annoying fact that it’s a hoax, under the carpet. Wouldn’t want to spoil the narrative now, would they?

When an electrician shoots and kills a dozen innocent people in a Navy Yard, he’s from that point on more correctly described as a mass murderer than an electrician.

This “diplomat” is more aptly described as an activist. Please don’t refer to her as a diplomat.

What does it matter?

If the Israeli soldiers want to beat up diplomats, I volunteer Kerry and Hillary.
Which one to thump first?
“What difference does it make?”

The entire international Progressive hierarchy is going insane. They’ve tasted what total power and control might be like, but at the same sense economic tremors and a growing populist resistance around the world sufficient to threaten their agenda (which includes the destruction of Israel) in profound ways. So they’re “speeding the plough.”

>>”How would France react if an Israeli diplomat led protesters attempting to circumvent a French judiciary ruling and then punched a French policeman in the face?”

It’s the sort of question they can’t entertain because in their minds Israel, like the Tea Party in the minds of the American Left, is a subhuman body, categorically apart from and beneath their own human existence. There can be no analogies between enlightened elites and subhumans.

If there’s one thing we’ve learned about leftist fascists, is they are ruthless, pathological liars, who will murder just as ruthlessly if they gain absolute power.

If there’s one thing we learned about the GOP, it’s they are pathologically corrupt and frightened people, who will squander any victory handed to them by our efforts.

And if there’s one thing we’ve learned about the Tea Party, it’s that its leaders are winners, worth fighting for, tooth and nail. For only they will stand by us.

I hope we’ve learned something.

It is difficult to take the left seriously, which is what makes them so dangerous.

For instance, we concentrate on our weak economy and looming fiscal crises, but we are in much better shape than the rest of the world. The next worldwide recession won’t be triggered by us, but it is coming soon.

Wasn’t France the country that made a videographer pay for showing the Mohammed Dura fable was a great lie? Didn’t the judge acknowledge that the videographer showed the truth but he had to pay for that crime?

If I were the soldier she took a swing at I would have smashed her face with my rifle butt till she spit teeth. All of them.

What can you say about a country which has more in common with the Paleos than with Israel? It is literally a choice of modern, western values versus barbarism, and France has declared for the barbarians.

This “diplomat” was so dumb, she didn’t think she was videotaped?

[…] Legal Insurrection has an excellent analysis and roundup of the entire incident. Just a short excerpt: […]