As Professor Jacobson details in his companion post, the Matthew Shepard narrative of anti-gay hatred culminating in murder may not be what it seems.

Research detailed in The Book of Matt by Stephen Jimenez casts doubt on the anti-gay part of the narrative.

But by now, the apparently-false narrative has become deeply ingrained in American culture. Detailed below are just a few examples of how the narrative has taken hold.

Elton John penned “American Triangle” as a tribute song to Shepard. Lyrics include, “God hates fags where we come from.”

Lady Gaga performed a rendition of “Imagine,” referring to Shepard

Speaking of Lady Gaga, a Lady Gaga fan put out a video of himself signing to “Born this way” in commemoration of Shepard:

Melissa Etheridge released a song called “Scarecrow” as tribute to Shepard. Lyrics include, “For love they crucified you,” and “This shepherd young and mild.”

Many other songs were penned for Shepard, including:

Peter, Paul, and Mary’s, “Jesus on the Wire”

Protest the Hero’s, “Fear and Loathing in Laramie”

Shortly after the attack against Shepard in 1998, former President Clinton, asked the nation to join him in praying for Shepard.  In the statement, he said he was “deeply grieved” by the crime, and used it as a rallying point for legislation.

By video, President Obama promoted the Matthew Shepard Foundation and welcomed guests to a Matthew Shepard gala dinner. In the video, Obama recounts how he met with Matthew’s mother in the Oval Office, and promised her he would “honor Matthew’s legacy by ensuring that the full might of the law comes down on those who would attack somebody” because of their sexual identity.

Ten years later, three journalists who initially covered the story were featured on an NPR program. One reporter, Ms. Heather Feeney said that the experience covering the story “is probably the underlying reason why I’m not a reporter anymore.” Another reporter said the coverage “rattled” him and made him question, “Why am I doing this?”

A picture of Shepard was featured on a cover of Time magazine beneath the headline: “The War Over Gays” and above the text, “Murder in Laramie.”

Matthew’s mother, Judy Shepard, appeared on Ellen for a TV interview in 2009.

The headline, “Tears and Outrage: A gay student’s murder” appeared on the November 2nd, 1998 cover of People. The story inside relates how at the time of his funeral, “Matthew had become something more than his parents’ son, a martyr whose slaying served as a brutal reminder of the human capacity for hatred and violence.” 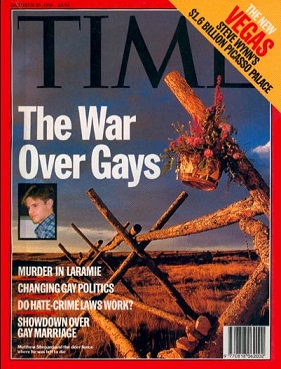 Numerous articles and books have been written on the subject of Matthew Shepard. Titles include:

From Hate Crimes to Human Rights: A Tribute to Matthew Shepard (2001)

The Whole World Was Watching: Living in the Light of Matthew Shepard (2005)

The Meaning of Matthew: My Son’s Murder in Laramie, and a World Transformed (2009)

Murder, the Media, and the Politics of Public Feelings: Remembering Matthew Shepard and James Byrd Jr. (2011) 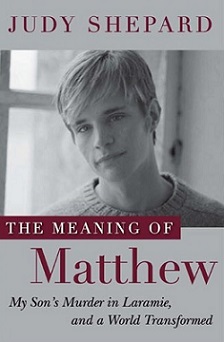 In addition, a number of colleges, such as the University of Oklahoma, have shown screenings of The Laramie Project to current students in order to facilitate community discussions

Matthew’s mother, Judy Shepard, travels across the country to speak to college campuses, including Yale, about hate crimes

A new film called “Matthew Shepard is a Friend of Mine,” has its own Facebook profile page, and more than 3,300 ‘likes‘. 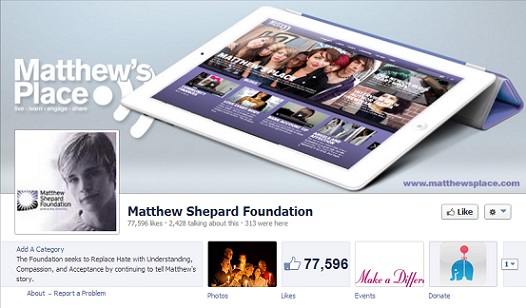 The examples above reveal only some of the ways in which pop culture has become infused with the false Shepard narrative. Even with the new information presented by author Jimenez,  separating actual truth from pseudo-truth may prove a challenge in re-shaping the narrative of why Shepard died on October 12th, 1998.

It’s tangential, but a print advertisement for the television program, Smallville, also exploited the fervor with its crucifixion in a field imagery, if memory serves.

I’m glad I don’t follow popular culture any more, based on these examples. Even before the current book about Shepard’s drug dealing, the comparison of him to Jesus is grossly offensive, speaking as a Christian.

I’m so glad I don’t go to church with the likes of evil and hateful religious people such as yourself.

So, God loves homosexuals. This is true, too.

Since homosexuality is a sin just like every other sin (lying, stealing, killing, for example), and since God hates sin, He has levied a penalty that all of us unrepentant sinners must pay: “The wages of sin is death.”

That doesn’t mean that anybody has the right to kill us for what we do,(unless the State sentences us to death for our crime), but God can and will kill our souls and bodies in the hereafter by our eternal separation from Him. That separation is hell.

Go back to your church! We don’t another preaching lesson!

I wonder how people would have reacted if President Clinton had asked the nation to join him in praying for a young meth dealer who had been brutally murdered by another drug dealer and one of his former gay lovers after a drug deal with them had gone wrong? Or if President Obama had told the nation “If I had a son, he’d look like Trayvon, and he probably would have been kicked out of school and been out smoking marijuana and assaulting white people for looking at him the wrong way too.”