Term you will not hear about Atlanta kidnapping perp: Illegal Alien

Term you will not hear about Atlanta kidnapping perp: Illegal Alien

Why was this person not deported after his involvement in drug trafficking was known? 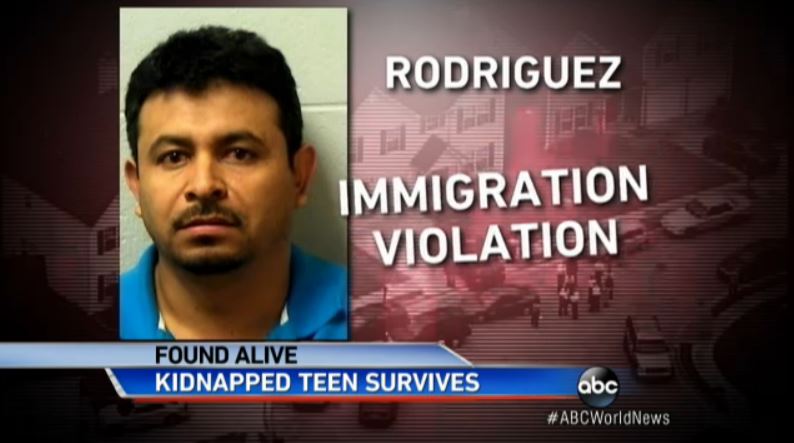 The Associated Press and numerous other media outlets have banned the terms “illegal alien” or “illegal immigrant” after a relentless campaign by immigration activists who illogically claimed the terms were racist, and who want to soften the reality of crime committed by people in the country illegally.

The recent kidnapping and rescue of a teenager in Atlanta demonstrates how the media is wording around the term, and diminishing the facts by making it unclear if the perpetrator was in the country illegally.

An important fact relevant to the story is whether he was here illegally.  That would raise questions as to why he wasn’t deported after his involvment in drug trafficking was known.

Here is some of the terminology used to describe Contreras-Ramirez, which discloses that ICE is involved, but is completely vague as to the nature of the immigration problem (emphasis added):

Okay, he’s a “Mexican national” and is being held on unspecified “immigration” issues.  We can all guess that he’s here illegally, but why should we have to guess?

I spoke this afternoon with the Public Information Officer for the Atlanta ICE office, Vincent Picard, who confirmed that Contreras-Ramirez is being held by ICE for “being in the country illegally.”

See, that wasn’t hard.  The perp is an illegal alien.

That’s relevant to the story, but it’s a term you will not hear in the mainstream media.

Term you might hear the Administration use: “The Sequester made me do it!”

Doing the crimes…, wait, our thugs are doing them too, but sometimes ours go to jail for more than 6 months.

ILLEGALS = still doing the “jobs” most Americans won’t do.

Actually, we should be more precise in our language. A person who has entered the country without following immigration policy has not broken any criminal law. They have broken procedure, but not law. They are still entitled to an immigration hearing and a judge may allow them to stay in the country or order that they be deported. If one has been deported and returns without following procedure, THEN they are “illegal”. In other words, one is not illegally here until a judge rules that they are. So someone who has never been ordered deported before who is here without following procedure is not technically an “illegal alien”. There is no criminal penalty that I am aware of for being discovered here without having gone through procedure unless you have been previously ordered out of the country.

You are wrong. Entering the US improperly is a federal crime. http://codes.lp.findlaw.com/uscode/8/12/II/VIII/1325

so….you’re saying that nobody is a criminal until they get caught.

Do you support all violations of laws and rights in principle?

Following your analogy, someone who enters your house is not a criminal, and has not violated your rights, until you either invite them to stay or ask them to leave.

That said, you are right in practice. A legal jurisdiction and rights generally are only as meaningful as your ability to administer and preserve, respectively.

first violation a civil offense.
second is a criminal offense.

Uh, that’s not what the US code says.

Forgive my stupidity, but you’re saying I have to break into your house a second time to be a criminal?

You would think that someone who purports to lecture others on legal principles would understand that there are many things that are illegal but not criminal.

Call them “foreign invaders” instead.

This is not directly related to the ‘Mexican national” comment but I would like to add that when I first heard of the Amber Alert issued in this instance I immediately knew that this story would end up being bogus or at least much more complicated than just a random home invasion that went wrong. As each new piece of information surfaced it became more and more obvious that something was wrong with the story. We will continue to hear more oddities as the story unravels over the next few days unless the media just drops the story entirely.

This is how they collect drug debts in Mexico. They snatch a family member and hold that person until the drug debt is paid. If the debt isn’t paid within a certain period of time, they write the debt off. And whack the kidnapped person, and dump the body on the front lawn of the person who owed the debt.

Then it’s back to business as usual.

After digging into both men’s criminal background, Channel 2 Action News learned there was a connection between one of the men arrested and Ayvani’s mother, Maria Corral.

ICE agents confirmed to Channel 2 Action News that Rodriguez was arrested in December 2012 in Henry County under the name of Juan Aberto Contreras-Ramirez, and was charged with trafficking marijuana.

Drug agents said they found 500 pounds of marijuana in the Henry County home where Rodriguez and Ayvani’s mother were arrested.

yeah, try to keep up. if you call somebody who enters the country in violation of federal law an ‘illegal immigrant’ then you are RAAAAACCCIIIIST.

of course, many of those very people are members of an organization named ‘La Raza’ which translates from spanish to english as ‘The Race’

That would make them “La Razaist”

“illegal alien” or “illegal immigrant” or “uninvited visitor” or…

Who cares, really? Some have a problem with it, some do not. Time will sort this out regardless of whether or not so many people on both sides of the [stupid] issue freak out over it.

This is just another example of why politically correct speech is evil. Truth is invariably sacrificed when we yield to persons or groups with an agenda to find in-offensive truthful words to be offensive.

The Orwellian effect on our language!

But look here. The first words you see are the “Mexican-Hispanic” was here illegally. And, was in the trade of selling drugs. So he runs fast. And, usually avoids da’ law.

Kidnapping a kid, however, tipped the balance.

It also pushed this story UP in da’ news. Where after you shovel away the propaganda BS, you realize that this case wasn’t solved by the local yokels.

Someone should have let them know that murdering your customers, kidnapping young girls and in general calling negative attention to yourself is not a very good business model.

Illegal aliens have more rights than Republicans and Conservatives. Nobody is allowed to speak the truth about illegal aliens.

These news outlets get a memo each day (or more often) telling them what phrases to use. They obey like the little lemmingsthey are. They have no credibility whatsoever.

Anyone who is in this country without authorazation is an illegal person. Isn’t illegal the direct opposite of legal? If a person is not legal then he must be illegal. Right? I get so tired of PC. It’s mostly stupid.

I’m confused, so help me out here. Why can’t someone just drive this person out to some remote area and put him in a hole?

Oh, yeah; because he might be a Republican waiting to come forward. I keep forgetting…silly me.

I think what we can conclude from this is that illegal aliens will bring their culture of kidnapping for revenue generation to this country — just like it is in every central and south American country. Wonderful.

In the future I demand that all LI commenters stop referring to me as a ‘citizen’, a term I find offensive, demeaning, and racist. From now you shall refer to me as a documented resident.

(If you enjoy going to lib sites and engaging in, ahem, substantive debate, do like I do and constantly demand they use politically correct terms you make up on the spot).

And then the media wonder why nobody trusts them and their revenue keeps going down.

The US news media, save for Fox News, has been completely corrupted, and now functions solely as a propaganda machine for the leftist-most element of the democrat party.

We ought to just say it: the democrat party is the communist party.