From Syrian television, translated by MEMRI, a bizarre anti-Obama screed.

First a couple of screen captures: 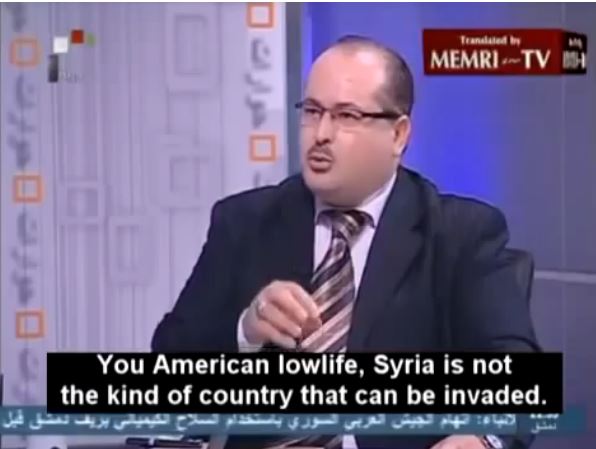 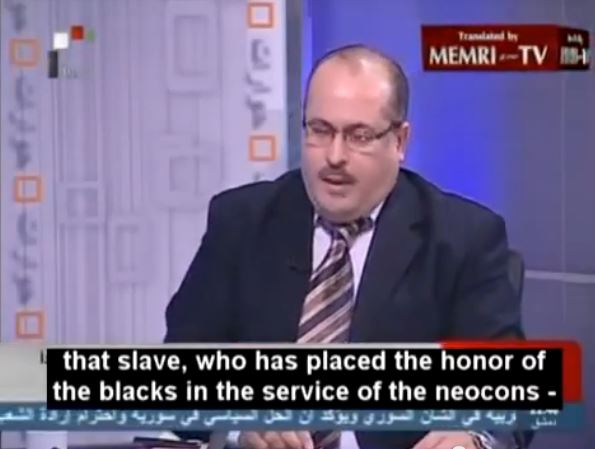 You would think hearing a foreigner speak about the current U.S. President in that manner would spark anger in an American who loves his country.

This Syrian idiot isn’t worth the effort. Just another ignorant waste of oxygen.

Context? Who is this man and who is his audience?

I completely agree with you. It is a bizarre screed against the President.

From the screen capture: “Syria is not the kind of country that can be invaded!”

We’ll be the judge of that, Swampy…

The left decided to elect a President who would be loved, believing that love = respect. Instead we’re stuck with a buffoon who garners nothing but contempt.

That does it! Nobody from another country insults a Marxist revolutionary in my country!

Remember when Malcolm X talked about the equality found in Islam when he went to Mecca? He should have stuck around a bit longer and talked to the black skinned Africans who have the misfortune to be Muslim. Black Americans don’t know naked racism until they deal with Islamic countries wher the word for black and slave is the same, abd.

Obama didn’t lose this round.

Reminds me of the Cuban Missile Crisis, which separate from Kennedy’s assassination, is how history records Kennedy.

50 years from now the ‘syrian stand-off’ may be a capstone for Obama. He still gets to speak t’marra night from the Oval Office.

Tell it to the Ottomans, of which Syria was a vassal state from 1520 until WWI or roughly 400 years.

All of this will end the Syrian civil war in a decisive victory for Assad, with probably the reconquest of the whole nation.

Syria ‘gives up’ its CW, then Syrian special forces, or the idiot rebels themselves, launch another CW attack, which can then be blamed only on the rebels.

The Saudis are forced to end their bankrolling of the rebellion and Assad and Putin have a free hand to end the whole business, Chechnya style.

I maybe an atheist.

But the ex-evangelical in me is suddenly reminded of this passage from the old testament. Different screed but same attitude from Fatty’s distant ancestor.

For my Christian compatriots. Presenting, The Threats and Insults of Sennacherib, king of Assyria who threatened to level Jerusalem.

“That slave, who placed the honor of the blacks in the service of the neocons – ”

So astute this man is, a veritable sage of wisdom. \sarc

First for thinking that neocons are responsible for this Marxist narcissist. The Syrians win the prize for having a guy even more loopy than Baghdad Bob.

Secondly, doesn’t he realize that the term “Blacks” is so politically incorrect? He is obviously well versed in analyzing American politics…..not.

Thirdly, Barack has demonstrated that he cares little for the notion of Honor, for anyone but himself. And by his actions, he has very little of personal honor left after this whole charade, Benghazi, interjecting on how “Police acted stupidly” in the Beer summit event, the “If I had a son” comment, “You didn’t build that”, and numerous other farcical responses to current events.

Oh my, I didn’t realize that Chris Matthews defected!

Well, the players may have changed, but it is still the same old rhetoric.

I would like to see the look on this soft fat pig’s face when the Special Forces kick his door in.