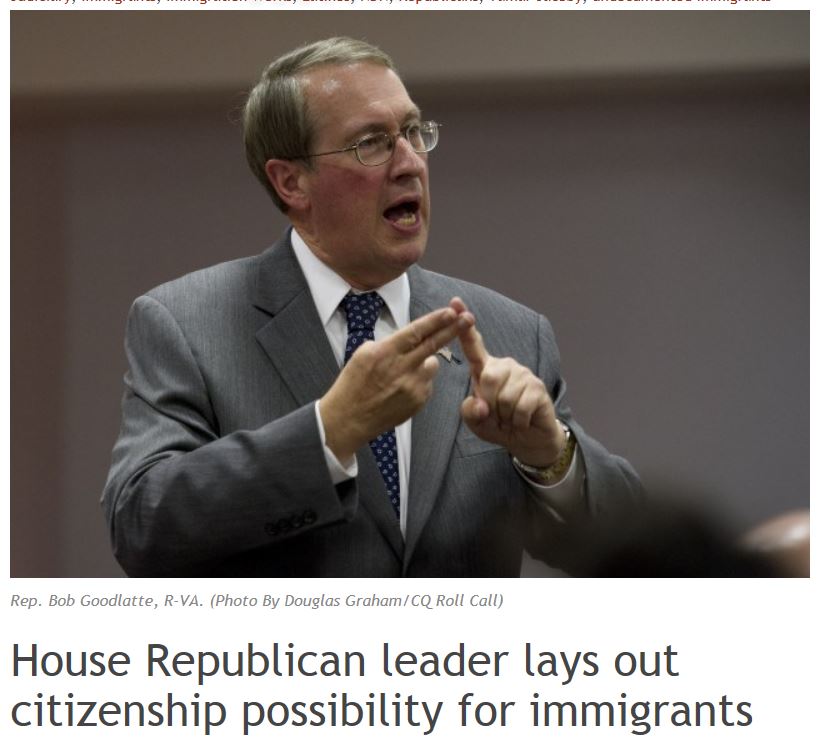 Looks like the chance of “comprehensive immigration reform” (a/k/a amnesty) passing the House just got a little less.

In a blow to the hopes of passing immigration reform anytime soon, the bipartisan House “gang of seven” plan is probably dead, and almost certainly won’t be introduced this fall as promised, a top Democrat on the “gang” acknowledges.

“It doesn’t appear that we’re going to move forward with the group of seven,” Dem Rep. Luis Gutierrez, a key player on immigration as a member of the gang, said in an interview with me. “The process is stalled. I don’t believe we’re going to produce a bill anytime soon.”

This undermines the already dwindling prospects for reform, because the House “gang of seven” plan — which would provide a path to citizenship but is significantly to the right of the Senate bill — was seen as a comprehensive plan Republicans who genuinely want to solve the immigration problem just might coalesce around. (The gang of seven plan would reportedly provide for a probationary period for the 11 million, in which they’d admit wrongdoing, and onerous conditions for the path to citizenship, which would be 15 years long.)

A quasi “Dream Act” seems the likely compromise, although depending how expansive it is in terms of “family reunification,” it could be a back door amnesty.  Via NBC Latino:

Speaking at a GOP Conference Hispanic Heritage month event, Rep. Bob Goodlatte, R-Va.,  said children of immigrants not legally in the U.S. could find their way to citizenship by serving in the military, through education and working in specific fields.

The Goodlatte compromise is what Democrats have feared all along with their Why do you want to deport my daddy? campaign.

It takes away the “for the children” argument, but doesn’t give the Democrats 10 million new voters.

No rewarding foreign invaders! Politicians who support this show how much they are willing to disregard those who follow the rules to get here and those who already have citizenship.

A frustrated American citizen grappling with immigration for six months to get his wife—obviously not an economic refugee, being from the (at the time) second largest economic powerhouse in the world—and baby daughter (further obvious proof, to most people, this wasn’t a paper marriage) over here … that was me, 22 years ago.

Moral of the story: Playing by the rules is for suckers.

I should do that before posting.

Without the “It’s for the Children” meme, the democrats would have nothing to base their arguments upon. By taking that away, it’s like taking the peg leg away from a pirate! How cruel can you be? (Well, besides Allan Brauer cruel, that is.)

Enough of this BS from Republican “leaders”. NO AMNESTY. Period.

From a couple months ago CNN/ORC POLL: “Sixty-two percent of those questioned in the survey say that border security should be the main focus of U.S. immigration policy, with 36% saying that creating an eventual path to citizenship for undocumented immigrants should be the top priority.”

For Republicans only 19% want Amnesty first. Yet we have Goodlatte and Cantor in leadership positions pushing this “kiddie” Amnesty like liberal Democrats.

So why does the Dream Act allow the children to keep the Citizenship stolen by their parents?

We need new leadership in Congress. Goodlatte and Cantor should be among the first to go. Might as well be Democrats if they are going to push Amnesty.

Nothing is ever dead with these people. Obamacare rose from the dead at least a half dozen times. They’re relentless.

The whole point was to get the House to pass something, then morph it in conference committe.

ANY “immigration reform” bill will devolve into amnesty for illegals.

Somebody seems to be under the delusion that the US owes them something. It does not. Living illegally in the US doesn’t impart any sort of special status.

But the Dems are unlikely to give up on this. They see this as their chance to transform the US to single-party rule for the next generation or two. I’m not at all certain that they’re right; unlike blacks, Americans of recent Hispanic origin are not monolithically and unthinkingly Democrats. But we shouldn’t allow them the chance to try.

When do the deportations at their own expense begin? Here folks have money. They save more than average Americans do. They send a lot of money back home. They are more likely to be employed than the average American is. Deport them and let them pay the ticket back home.

I was warned about Goodlatte a couple years ago, when it was apparent that his predecessor, Smith, would be term-limited. I was told that he was almost as bought and paid for as Smith. My particular interest is IP, and, in particular patent “reform”, which Smith rammed through as the Leahy-Smith America (dis)Invents Act (AIA), and Goodlatte seems determined to follow with more legislation specifically designed to protect large companies against being sued for stealing inventions from smaller ones and individuals. Hundreds of millions of dollars were spent getting the legislation through Congress in 2011, and looks like it may repeat here. Seeing the same stacked committee hearings as last time around, etc., where the only ones being heard are those with the deepest pockets (and their academic puppets), and are willing to spend it buying influence in Congress.

Cantor has long come across as a bought and paid for tool. He sees where the money is, and seems to be the one pushing the House leadership the hardest in that direction, regardless of the wishes of their constituents. Inevitably, it seems, that only when an awful lot of the constituents of his caucus get riled up does he finally back down.

That has long been the problem with Republicans in Congress – that the longer they are there,, the more that they seemingly sell out. It should be no surprise that the real mavericks in the Senate are Republican freshmen.I think that many start their careers listening to their constituents, but ultimately, the din of DC, and all the money there buying influence, seems to corrupt so many of them. Of course, this doesn’t really affect Dems as much, since a lot of them seem to view public office as a way to get rich while bringing home the bacon for their constituents – which is why, I think that you find their level of corruption being somewhat related to the security of their seats, with the members of the CBC, with their majority-minority districts at the top of the list for most corrupt. But, Reps are supposed to represent their grass roots constituents. So many though ultimately seem to get bought off.

And the amazing thing is an old quack like Cantor had the nerve to sell himself as a “Young Turk”.

Hey all you legal geniuses. I have this notion that 42 USC 1983 can be used to get the DoJ to enforce border security. Am I crazy? (don’t answer that)

Seriously, why is it not a conspiracy to deprive rights enumerated in the constitution? I’m not thinking such a suit could win but if it survived a FRCP 12(b) motion to dismiss it would be political dynamite.

Prediction: At some point in the coming budget battles, GOP leadership will dangle an immigration deal in return for an Obamacare deal.

I thought it was the gang of eight.