Op-Enemies in vogue at NY Times and WaPo

Op-Enemies in vogue at NY Times and WaPo

Is there a difference between opinion and propaganda? Yes. But the MSM doesn’t seem to know.

Within the past two weeks, two of the most prestigious American newspapers published op-eds of enemies of the United States.

Earlier this month, the New York Times published an op-ed by Vladimir Putin of Russia arguing that the United States would make matters worse by attacking Syria and (among other things) denying that it was the Syrian government that used chemical weapons. Putin’s op-ed also offered Russia’s support for a negotiated agreement to end the Syrian civil war.

Later we learned that the op-ed was placed with the assistance of an American PR firm.

The public editor of the New York Times later defended the placement of the op-ed. In the course of her defense, she quoted editorial page editor, Andrew Rosenthal:

“There is no ideological litmus test” for an Op-Ed article, he said. In addition, he said, it is not the purpose of the Op-Ed pages to help or hurt the American government. It is to present a variety of interesting and newsworthy points of view, at least some of which will be contrary to The Times’s own point of view, expressed in its editorials.

The Times has published very few Op-Ed pieces by heads of state, Mr. Rosenthal said, partly because they have their own ways of getting their messages out. …

I asked him about Mr. Putin’s statement that there is “every reason to believe” that the poison gas has been used by opposition forces, not the Syrian government – which many now do not believe to be true. Mr. Rosenthal said that “falls into the category of opinion.”

The “ideological litmus test” argument is misdirection.  The Times has not hesitated to refuse Op-Eds from political figures seeking to set the record straight, including John McCain and Scott Walker. 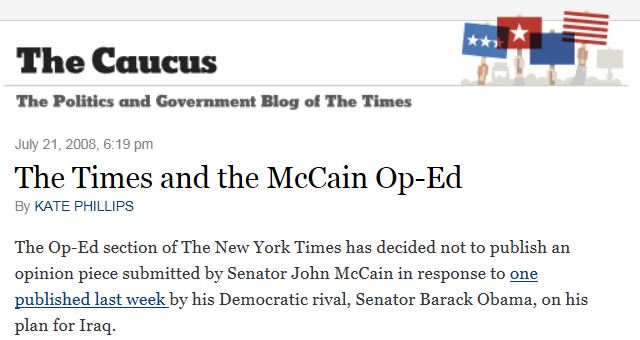 The goal of Putin’s op-ed was to solidify American public opinion against an attack on Syria. Assuming that that was President Obama’s intent, Putin’s main goal was to undermine the public position of the American president. (Admittedly, even without the op-ed, the American public was against such a strike. Furthermore, once President Obama chose to ask Congress for the authorization of force, it pretty much eliminated any chance that he would use attack Syria.)

Rosenthal’s odd assertion that a false statement could be excused as an “opinion,” is beyond ridiculous. (More on this later.)

In an Op-Ed article in The New York Times released on Wednesday, Mr. Putin laid down a strong challenge to Mr. Obama’s vision of how to address the turmoil, arguing that a military strike risked “spreading the conflict far beyond Syria’s borders” and would violate international law, undermining postwar stability.

“It is alarming that military intervention in internal conflicts in foreign countries has become commonplace for the United States,” Mr. Putin wrote. “Is it in America’s long-term interest? I doubt it.” …

Now he appears to be relishing a role as a statesman. His spokesman, Dmitri S. Peskov, said in an interview that the Russian president was not seeking “ownership of the initiative,” but wanted only to promote a political solution to head off a wider military conflict in the Middle East.

By mentioning the op-ed in the course of a news article, the Times gave the op-ed an extra boost of credibility. Now it wasn’t just an opinion, but a news item promoted by the New York Times. True, the report later acknowledged that Putin’s claim about chemical weapons was dubious. But by writing an article about how President Putin was becoming a statesman (at America’s expense) and citing the op-ed they had just published as proof of that, they elevated an opinion article into news.

Now, given the U.N. inspectors’ report from Syria and some incredible reporting by C.J. Chivers and others on our front page today, it seems even less supportable. …

It’s pretty amazing, by the way, that Kremlin propagandists use Twitter and cite YouTube videos. If Mr. Putin starts Snap Chatting meetings in which he orders the imprisonment of political opponents, or the re-branded KGB puts assassinations of journalists on its Pinterest page, we will have reached a new stage of evolution.

The excellent reporting at the New York Times confirmed that it was the Syrian government that used the chemical weapons. But read Rosenthal and how he dismisses “Kremlin propagandists.” As he and his own paper behaved, they too served as a Kremlin propagandists, elevating Putin’s dishonest op-ed into news.

Astonishingly, Rosenthal can’t quite internalize the implications of what he wrote. Does he really believe that Russia, which even he acknowledges is lying about Syria, is working on a credible plan to make Syria surrender its chemical weapons?

Like Putin, Rouhani takes a conciliatory tone. But he makes it clear where he’s coming from:

More than a decade and two wars after 9/11, al-Qaeda and other militant extremists continue to wreak havoc. Syria, a jewel of civilization, has become the scene of heartbreaking violence, including chemical weapons attacks, which we strongly condemn. In Iraq, 10 years after the American-led invasion, dozens still lose their lives to violence every day. Afghanistan endures similar, endemic bloodshed.

The unilateral approach, which glorifies brute force and breeds violence, is clearly incapable of solving issues we all face, such as terrorism and extremism. I say all because nobody is immune to extremist-fueled violence, even though it might rage thousands of miles away. Americans woke up to this reality 12 years ago.

Putin, made a similar argument. It is American intervention that breeds violence; not the nature of radical Islam.

Funny that Rouhani would make this argument the same time that it’s reported that there is significant evidence that Iran’s Republican Guards are fully involved in the Syrian civil war on the side of the Assad regime.

But what’s really interesting about Rouhani’s article are two paragraphs.

Three months ago, my platform of “prudence and hope” gained a broad, popular mandate. Iranians embraced my approach to domestic and international affairs because they saw it as long overdue. I’m committed to fulfilling my promises to my people, including my pledge to engage in constructive interaction with the world. …

Sadly, unilateralism often continues to overshadow constructive approaches. Security is pursued at the expense of the insecurity of others, with disastrous consequences. More than a decade and two wars after 9/11, al-Qaeda and other militant extremists continue to wreak havoc. Syria, a jewel of civilization, has become the scene of heartbreaking violence, including chemical weapons attacks, which we strongly condemn. In Iraq, 10 years after the American-led invasion, dozens still lose their lives to violence every day. Afghanistan endures similar, endemic bloodshed.

The five links in these two paragraphs all link back to Washington Post articles. Buzzfeed reported that the Washington Post dealt directly with the Iranian government. This begs the question, who put those links in?

Even if one believes that there is value in publishing the propaganda of enemies (which I don’t), that would only apply if what’s presented is the unvarnished opinion of the enemy without any outside enhancement so readers can judge . The New York Times, by working with a PR firm as an intermediary and making Putin’s op-ed into news elevated Putin’s op-ed from propaganda into something of substance. The Washington Post did the same thing by buttressing Rouhani’s op-ed with its own reporting.

My feelings toward the old media have hit absolute zero. Excellent articles, like this, provide confirmation.

Propaganda distorts or ignores the truth to promote an agenda.

Opinion is usually based upon worldview built up from the truths of experience, whether or not it has an agenda.

This is, of course, my opinion 🙂

The Left just loves their tyrants. All through history, one infatuation after another. But the lessons are never learned. Like teenagers who fall into crush after crush after crush and never grow up. It wouldn’t be so terrible if they occupied the discredited fringe of American life and politics, like they used to.

Rosenthal can’t quite “internalize the implications” of what he wrote. Hah. The Left “can’t quite internalize” anything they do, and can only deeply contemplate the hatred for that which stands in their way. Everything else, their actions and the consequences of their actions, always escapes internalization and reflection. That’s what leftism means: an eternal cost-free childhood of bad ideas within a Lord of the Flies construct of ugly power.

Britain’s “Stumbling and Mumbling” blog made an excellent point last year about whether the BBC should broadcast the opinions of politicians who represent opposing points of view:
http://tinyurl.com/75yo27k

“It’s not good enough here for the BBC to reply that it usually aims at “balance” by having opposing politicians on. This can lead to what Paul Krugman called “opinions differ on shape of planet” journalism. If one party says the world is flat, and another says it isn’t, you do not have a reasoned debate, but just one moron and one non-moron. In this sense, there’s a conflict between the BBC’s mission to inform and educate on the one hand, and it’s aim at impartiality on the other; being impartial between truth and falsehood does not inform or educate.”

The primary sticking point is in letting the media decide which side is telling truth and which is spouting falsehoods. I am sure that our American MSM (print, broadcast, online, the whole boiling lot) would showcase the falsehood pretty much all the time. At least that’s what they have been doing so far.

Stumbling and Mumbling offers a good guideline for determining if and when politicians should be allowed air time at all. RTWT, as they say, including the comments.

Thank God in the US we have something called the 1st Amendment.

I would rather let someone say “The world is flat” and be judged on the merits of their ideas, rather than be silenced by a policy wherein someone can subjectively judge what ideas have merit or not.

And that is not circular reasoning. For the idea of silencing a position based upon the idea is not the same as open airing an idea and letting it compete in the markplace of ideas. The public can and ought to judge ideas in the open, not be pre-censored by some “Guidelines” based upon the will of a small group of bureaucrats.

It’s an ecosystem. And the head of the food chain, while arrogantly busy chasing and chewing up his friendly lessers, is unaware he’s being chased by a bigger creature in the swamp who finds him tasty looking.

As long as anyone reads the Times and WaPo they will continue to get away with this behavior.

As long as anyone reports on what appears in their papers they will continue to influence.

Ignore them. Don’t report their contents. Don’t acknowledge their existence. Don’t talk to their reporters. Don’t read them.

They will fade away.

For many decades, the New York Times and the Washington Post were free to publish whatever they wished, without challenge. As a result, people believed what was published.

Things changed about the time of the run-up to the war in Iraq, when people had both the means and the motive to cross-check their news stories, and notice what was put in, and what was left out.

The New York Times will publish any fantasy that fits its views, without considering the factual basis, so long as it also is, by their own criteria, well-written. Howell Raines and Jayson Blair, for example, were two writers that were fired because they were exposed, not because their actions conflicted with the paper’s policy.
http://www.slate.com/articles/news_and_politics/press_box/2004/03/the_autobiography_of_howell_raines.html

Well, our leaders are useless; we might as well try theirs.

Are you there, Jeff Bezos?