One lesson for mass killings: Don’t trust media reports for at least 24 hours

One lesson for mass killings: Don’t trust media reports for at least 24 hours

It happens in just about every mass shooting or terrorist event.  The initial media reports are inaccurate, yet those hurried inaccuracies feed a political narrative that is hard to break even after the facts are “corrected.”

In the Newtown shooting, the wrong person was identified as the shooter, and the weapons used initially were reported incorrectly.  I noted at the time, after the benefit of several hours in the car away from the internet on that Friday afternoon:

I’ve been out of pocket pretty much since the first sketchy reports this morning about a possible school shooting. A meeting, a luncheon and then 6 hours in the car.

The car ride was enlightening because I followed the details of the Connecticut school shooting exclusively by listening to the radio.

As in all these cases, the facts changed as the day went on. First, it was a mass shooting with a semi-automatic assault rifle, which the news reports noted would put back on the political table the reinstatement of the assault weapons ban. The latest reports indicate that an assault weapon was not fired. [See update]

Then it was a shooting with handguns, which the news reports noted would put back on the political table hand gun control. The latest reports indicate the assailant killed his own mother to get her legally licensed and registered handguns, along with a long rifle which was not fired….

Update: On Saturday the medical examiner said the rifle was used in the shooting, contrary to all prior reports that it was left in the car and the shooting was with handguns.

Almost every fact about the Newtown shooting initially was reported incorrectly:

Phones weren't shut down, other explosives were not found, there is no suspect in custody. Beyond "there was explosion" most MSM info wrong

The reporting of facts and the politics reacting to those changing reports still are in flux as of this writing.

(added) The media, as in Newtown, initially got the name of the shooter wrong: 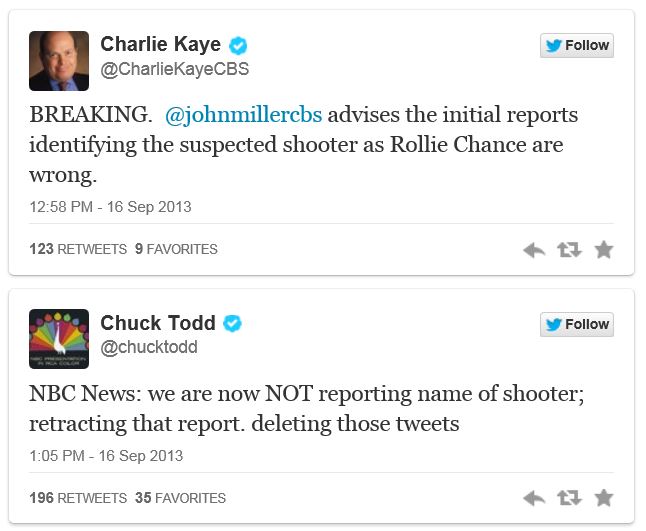 At first, reports also indicated that an AR-15 rifle was used drove the narrative in the mainstream media: 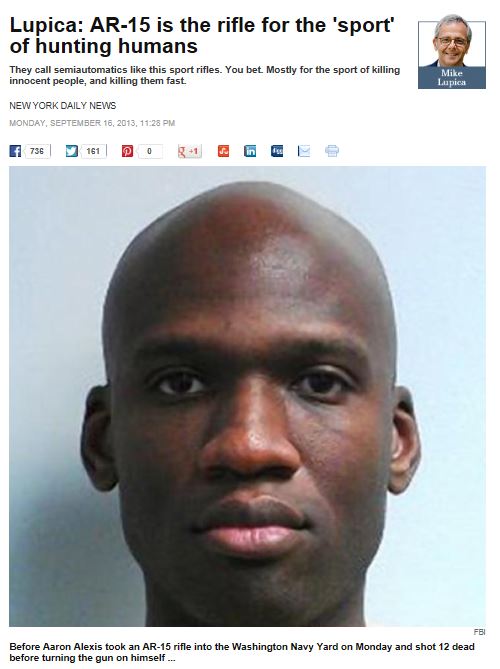 The AR-15 has been used seven times in past 20 months in U.S. mass shootings > http://t.co/4q2y7vSpfB (via @BuzzFeed ) #KillingMachine

[Note:  The tweet above doesn’t “load” on the page because Piers Morgan deleted it.  Twitchy saved the image below]

Now the “confirmed” facts have changed, and it appears that a shotgun was the primary weapon used:

Don’t be surprised if the “confirmed facts” change again.

And the problem was not the lack of background checks, but a system which allowed a dangerously mentally ill person to escape accountability, even getting a security clearance: 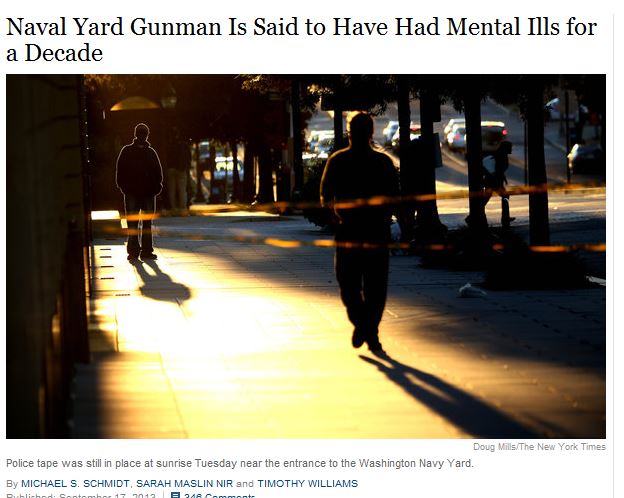 Ben Smith, Editor-in-Chief of Buzzfeed, has pointed out that in the internet age, Journalism sometimes means you are not the one to break the story:

The media’s new and unfamiliar job is to provide a framework for understanding the wild, unvetted, and incredibly intoxicating information that its audience will inevitably see — not to ignore it. A Reddit post seen by millions without context is worse for the story, and the public, and to the mission of reporting than the same post in a helpful and informed context seen by many more. Reporting is no longer a question of whether or not to dignify new and questionable information with attention — it’s about predicting which of it will influence the story, and explaining, debunking, or contextualizing it the best we can. That is, incidentally, what our readers want.

As with so many others, Buzzfeed learned that lesson again in the Navy Yard shooting: 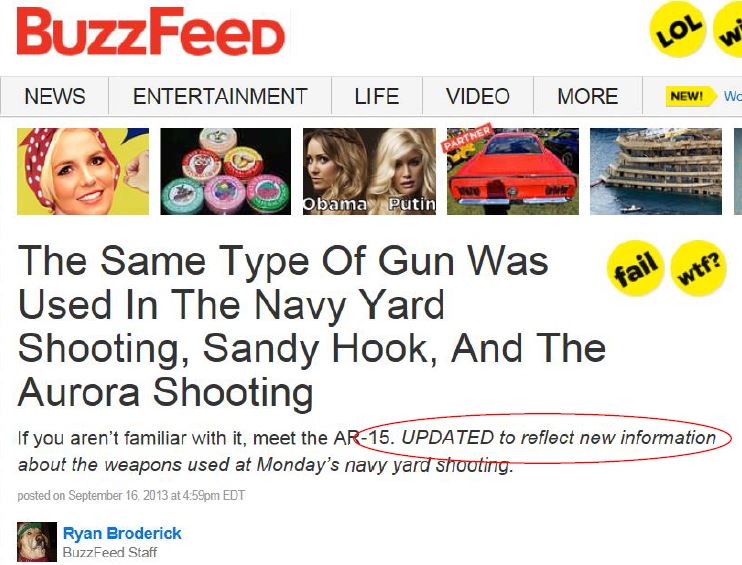 Update:  Just after 2 p.m. Buzzfeed changed the headline and added what presumably is the final correction update.  No one likes to have to do that, particularly to a story already cited as authority and shared on social media thousands of times: 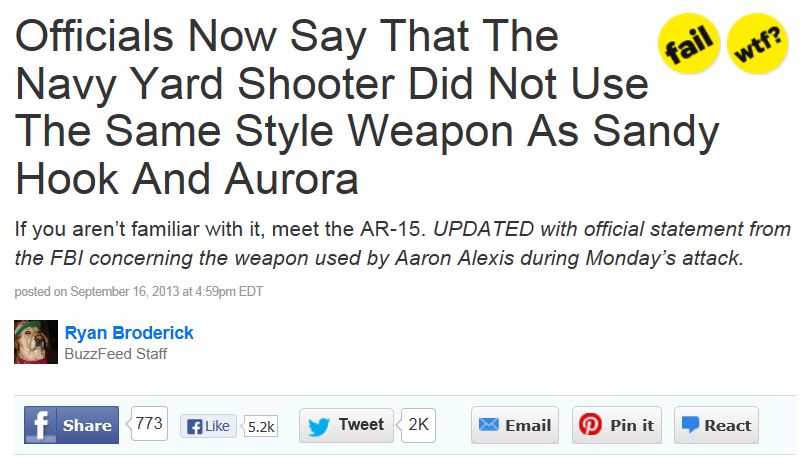 The media is so damned anxious to shape and control the narrative, they can’t be bothered to wait for actual facts.

Of course they do. It’s how they control the nation and have every intention of continuing to do so.

The current word is that the shooter didn’t use an AR-15, but months from now low information voters will “know” it was one of those evil baby killing machines instead of the most popular shotgun model in history, plus a couple of handguns he evidently liberated from security officers using the shotgun.

Or EVER. Look under the hood EVERY FLUCKING TIME.

Do NOT trust Mushroom Media reports AT ALL. Think critically, AND investigate.

And even for years afterwards. Matthew Shepard anyone?

There is just too much at stake regarding highly politicized cases/scandals to let idiots and ideologues control your information.

The internalized effects of “white privilege” coming to the surface? Any minute now.

Alexis reportedly visited Buddhist temples and in the land of origin for Buddhism they drink a lot of tea, so clearly this guy was a Tea Party member. It’s not conclusive as yet, but c’mon, everything points towards it. Even if it turns out he wasn’t a Tea Party member, his choice of target is 100% consistent with what a Tea Party member gone shooter would choose: big government military base, government employee targets, Washington DC location, etc., I mean…. HELLO, could it be any more obvious?

Friend of Navy Yard Shooter: He Was A Liberal Obama Supporter…

Hmmm, seems to be a developing pattern over 5 years… mass shooter = Obama Supporter

Apparently, the underlying cause of this massacre is coming out… The shooter had some mental issues, not just anger management ones:

Yet,our U.S. Navy did not declare him “mentally unfit.” Why?

As soon as it was mentioned that he shot those tyres because he felt disrespected… I knew that there had to be a mental issue involved… or he was acting out a BGI grievance.

Google and milblogs are your friend. 🙂
from a very recent post over at thisainthell.us:

But the Navy clarified Tuesday that while the service had originally sought to kick out Alexis with a general discharge, those proceedings were moving slowly, and it was unclear whether the Navy had sufficient cause to push forward. So when Alexis applied on his own to leave the Navy in early 2011 with an honorable discharge, the service granted his request, the official said.

Psycho-boy was cited multiple times for misconduct, but nothing which would indicate mental problems, beyond being a douchebag loser. From the above it is self-evident that the Navy took the quickest way to get the garbage out.

What you should be asking is why the Seattle police had received several calls about the perp several years ago, but did nothing more than knock on his door & leave when no-one answered.

Does anyone doubt that there is som ting wong with the mass media today?

I see whut you done there, lol.

When I was watching the news reports yesterday while at work (which happened to be tuned into MSNBC -yuch!!), I’m thinking in the back of my head, the attacker is going to be either black or a recently-arrived foreigner.

It’s amazing when I got home my initial thinking was confirmed. I’m beginning to think a good many of these mass shooting incidents are false flags designed to push the statist/collectivist agenda.

Despite being wrong, deliberately or not, Big Media gets to be first … to implant the news cycle image that fits the crisis. Gun shots? … game plan says use buzz words “AR-15” and “gun control”, bonus points for indicting the tea party.

Jump on the story and charge the listener with emotional outrage. e.g. “those damn gun loving racist tea party idiots must be stopped”.

Even if negating facts later leak out, the Pavlovian response (hunger to devour tea partiers) has been triggered. They get people drooling and in attack mode, so the conditioned “dogs of the left” have the scent of blood, and are howling down the attack trail … all over media and the internet.

I don’t watch MSNBC …. just curious of Chrissy’s take on all this.

Why ever trust propaganda?

The shooter had “secret” clearance. So, at least the N.S.A. knew about him. And, didn’t care. He wasn’t seen as a terrorist. Not that the N.S.A. has located any so far.

Plus, the usual propaganda. Obama says it’s the fault of voters who recalled two “stalwarts” over their position on gun control. And, with dianne Feinstink rolling in the senators, what we’ll get is more legislation against gun owners.

You can expect it. Part of the wall-to-wall propaganda machine.

Media reports? You mean don’t trust the PR wing of the Democratic Party!

CNN….The Most Trusted name in News..

classified the weapon used as an “AR-15 shotgun”.

I guess anything scary and potentially dangerous to the left is an AR-15.

Did it have an AR-15 large capacity clip?

Ironically enough, there is a semi-auto shotgun for sale which was built to look like an AR-15. I doubt that’s what the network had in mind when they printed that. 🙂

Obama is an incredibly insecure narcissistic megalomaniac. He is deceptive and has no objective moral boundaries.

He has the power to destroy every living person on this planet a couple of times over with a few commands.

If they ever start doing a mental health check before allowing someone to purchase a firearm, I would hope someone with similar personality traits would be denied the ability to purchase a single shot .22 rifle.

Or run for president.

I’m waiting to hear him say: “He could have been my son”.

…And apparently no one here noticed that many posts/articles insisted on referring to the “AR-15 assault rifle,” which does not exist.

Just getting rid of the “assault weapon” myth would be a useful step forward.

Turns out a cop in Rhode Island reported to the Navy Yard the guy was mentally unstable. Imagine that, an obama supporter mentally instable. What next, someone going to tell us global warming isn’t really happening?
http://www.foxnews.com/us/2013/09/17/navy-yard-shooter-heard-voices-through-walls-thought-people-sending-vibrations/?utm_source=feedburner&utm_medium=feed&utm_campaign=Feed%3A+foxnews%2Fnational+%28Internal+-+US+Latest+-+Text%29

So we now know for certain he used a shotgun.

Not too many months ago, Joe Biden encouraged people to buy shotguns.

Somehow I think this will not be mentioned by the media–and certainly none of them will blame Joe Biden for the murders.

You should never believe the Media until 240 years
afterwards.

3rd floor. At the Navy Yard. Where you don’t need a key to enter an office. (Second floor. All doors need their own electronic keys to enter.)

How did this killer know the layout?

Shooting starts at 8:30 AM. It’s over in an hour. The office next store of the area the killer chose to shoot from, stayed in his office. Under his desk. He had a cell phone. And, immediately reported his office number. The location. And, the killer’s “return” … after he went down to the 2nd floor … via staircase. And, couldn’t get into any of the offices down there.

Police killed him as soon as they showed up in force.

We’re told “first day of work.” Amazing how he found this area. Most people couldn’t even find a bathroom … without getting lost.

For the media? They reported nothing until late afternoon. They kept trying to say “white people.” But now you know WHO did the killing. AND, he was psychotic.

One thing you can’t find in the US Navy is medications usually given to those suffering terrible psychosis.