Norks May Have Restarted Nuke Reactor

Norks May Have Restarted Nuke Reactor

Friday the 13th is an appropriate day to report that the North Koreans may have taken a lesson from Syria, which seemingly built up its chemical weapons supply “in plain sight.” 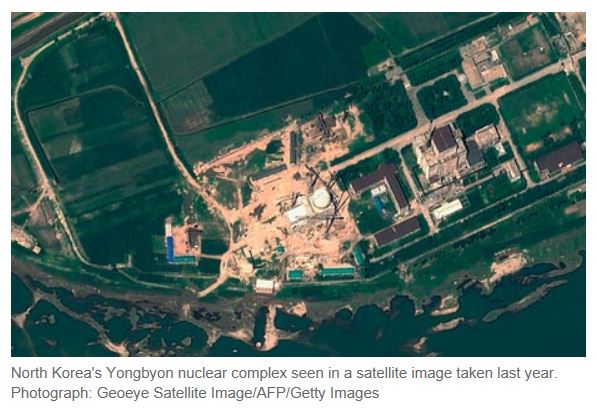 White steam can be seen rising from a building near the hall housing steam turbines and electric generators at Yongbyon nuclear complex in an image taken on 31 August, said the US-Korea Institute at Johns Hopkins School of Advanced International Studies.

…The US-Korea Institute said the gas-graphite reactor was capable of producing 6kg of weapons-grade plutonium a year. It believes that the North already has 34-36kg, sufficient for around a dozen weapons.

How will the Obama Administration respond? With a strongly worded message, of course!

The United States scolded North Korea on Thursday over reports indicating the reclusive nation has restarted a plutonium-producing nuclear reactor, emphasizing that such a move would violate U.N. Security Council resolutions.

….”Suffice to say, if it was true, it would be a violation of the relevant U.N. Security Council resolutions and, of course, contrary to North Korea’s commitments under its September 19, 2005, joint statement,” said State Department deputy spokeswoman Marie Harf.

Its this kind of strong stance that has inspired neighboring Japan to build up its national defense, despite an economy still suffering from the impact of a deadly earthquake/tsunami combination in 2011.

However, at least one South Korean thinks this Friday the 13th is very lucky:

More than 40 years after he was abducted from a fishing boat and taken to North Korea, a South Korean fisherman has returned to his home in Seoul, state-run Yonhap news agency reported Friday, citing a government official.

Jeon Wook-pyo, 68, escaped early last month to a third country — which has not been identified publicly — from where he sent a letter to South Korean President Park Geun-hye, seeking help to get home to Seoul.

“I took a chance to escape the North because I had a growing wish to spend the rest of my life with my relatives and brothers at home,” he wrote, according to Yonhap.

norks will leave their takin’ to R.o.d.m.a.n. which is one hell of a lot better then/than (pick one) b.a.r.r.y.

Maybe Barry will draw another one of his red lines, since the last one worked out so well for him.

Not to worry. B.O. will solve this crisis with his “Indecisive” foreign policy plan. Just ask Jay Carney.

It would appear to me that the world’s nastier states are feeling a little more cocky this week than last. Wonder why that is?

I was told by a credible source that Canada is massing a huge army of curlers and hockey fans on our northern border. Their plan is to swoop south capture Yellowstone, dig up Old Faithful and move it to their own cold uninviting county. I understand that Al Gore is being held hostage so he cannot warm people about the impending deicing of the north pole. Luckily the president and secretary of state have not been distracted by all of those red lines the world drew in the sand in the middle east and are at this very moment taking turns sitting atop Old Faithful to prevent it’s theft by those Canadian savages! Well done mr. president! You are muy malo!

Where are my meds?

I KNOWED IT. I’ve been warning people about the Canadians for decades, but they won’t listen. In fact, they mock me. Oh, the horrors of my yoot spent in Detroit, half a mile from Canada, enduring their nightly beer and hooker raids. Plaid flannel still causes me panic attacks. Maple syrup, too.

If they want Detroit, I say let ’em have it. Actually, I’d go so far as giving them Chicago or even all of California for that matter.

Carney: Obama doesn’t “believe in decisiveness for the sake of decisiveness.” Or any other kind.

Obama is Putin’s little butt-boy now, twerking around to gain his approval, shining his shoes, washing his feet, anything for MC-KGB.

What an embarrassment he is! But it was evident from the start that he wasn’t qualified to be a Senator, much less higher office, yet he was elected because America wanted to appeal to the Cool Kidz.

Not so cool now, is he, kiddies?

Barry, Barry, quite contrary, how does your garden grow.

Those of us who were alive in the early 1950s – and who were old enough then to know what was going on in Korea – called the North Koreans – “Gooks.”

So where did the name “Norks” originate? Please don’t tell me that it is not “PC” to use the word “Gook” but “Nork” is OK with our liberal Word Nazis.

You too, Pyongyang Sally.

I expect “NORK” is a PC correct contraction of NORth Korean. Can’t be calling them nasty names now, can we?

Definition #39 for “nork” in the Urban Dictionary may be the best answer I will find:

A contraction of the phrase, “North Korean.” Using it is similar in effect to that other derogatory term used against North Koreans, “gook.” That term was coined during the Korean War of the 1950s, and later applied to the Vietnamese, has since come to be mean nearly any person or group of Asian descent. Original usage of “nork” unknown, surge in usage noted in mid-2000’s, during North Korea’s ICBM tests and nuclear plant operation.

Actions have consequences — of course so does inaction.

Looks like a total dump. Is there even a paved parking lot anywhere near the plant?

We’ve just got to start sending them more foreign aid.

Wake up Jimmy Carter and get him over there. I mean he did so well the last time he went a’ negotiatin’…