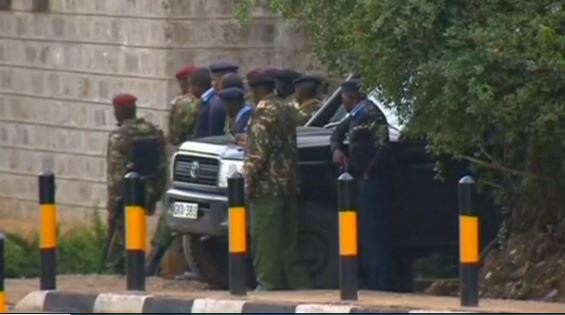 The attack is over, but the current situation is unclear as to whether there still are hostages. Live Twitter feed at bottom of post.

Night fell Monday in Nairobi with no clear resolution of the standoff between Kenyan forces and terrorists at Westgate Shopping Mall.

Kenyan authorities sounded increasingly confident that they had brought the three-day standoff to a close with a final assault Monday, reassuring a nervous public that there was little chance of escape for any surviving Al-Shabaab gunmen who had terrorized the mall, killing at least 62 people.

“Taken control of all the floors. We’re not here to feed the attackers with pastries but to finish and punish them,” Kenyan police Inspector General David Kimaiyo said on Twitter.

But it wasn’t clear Monday evening whether any hostages remained inside the four-story mall, and authorities had yet to sound the all-clear about six hours after the assault by Kenyan forces.

This seems to me to be a splitting image of the Mumbai hotel attack, yet I see no references to that anywhere.

I just find it curious.

I’m surprised they haven’t called out the NRA for their complicity in this crime yet.

I saw it referenced several times yesterday. Here is one:

“”Like the 2008 attacks in Mumbai, terrorist cells are learning that they can have strategic impact with dramatic terror focused on soft targets having significant psychological and economic effects,” Zarate said.

In November 2008, 10 gunmen went on a three-day killing spree in Mumbai, attacking two luxury hotels, a train station and a Jewish center, among other places in the Indian city.”

By aiding Al-Qaeda in Syria Obama is as responsible for the deaths of innocent christians as if he had pulled the trigger himself. Isn’t it interesting that while Obama continues his assault on our Second Amendment to disarm Americans, he’s perfectly willing to send arms to Mexican drug cartels that used those weapons to kill hundreds of Mexican citizens and also send weapons to our sworn enemy Al-Qaeda as well as the Muslim Brotherhood who are and have openly declared war on America.

While Obama gives his condolences to those killed in Kenya, I doubt we will here him uttering the words, Islamic extremism or Jihadists. Yet that’s exactly what Al Shabaab a member of Al-Qaeda is. Were now learning that its quite possible some of the members of the Al Shabaab group involved in this terrorist act, are Muslims from Minnesota and other states. Could it be they were part of the thousands of Somali Muslims that Obama continues to bring to this country? If Christians were slaughtering Muslims, Im sure Obama would be condeming this much more harshly. He has to speak out as president of America, but anyone who knows Obama and his actions, knows his comments are false. He has no feelings for dead Christians. Not one word from Obama’s Muslim mouth about the Christians in Egypt that are being murdered by Morsi’s Muslim brotherhood members.

Israeli businesses, in the Nairobi mall, were on the first and second floors. They specialized in jewelry. Debka says Israelis special units (in cooperation with Kenya), were sent immediately.

The terrorists are Somalis. And, I’ve known they’re funded by the saud’s. When we used to have piracy at sea, from Somalia, it was the saud’s who bought the very expensive GPS systems, to outfit the pirates with state of the art ability to find and track cargo ships.

First, the russians, after their ship was attacked, dispatched the somalis at sea. And, posting a video. They were handcuffed to a small boat. Perhaps the one they came in? And, this was sent “floating” … until it exploded. The Russian ships were not boarded since.

On big vessels, now, the insurance company provides snipers. (About six men at a time.) Who are armed. And, who are skilled at stopping the pirates from climbing on board.

Yes, there are still hostages in Somalia. But the hostages are from poor countries, where no one is able to raise the $100,000 per hostage to be relieased.

At least half the Israelis made it out of the mall, alive. Perhaps, they were armed and able to shoot back?

Will the Israelis go further? I have no idea. But in the past the Mossad killed all the terrorists who participated in the 1972 Olympics. Killing Jews in Germany, while the Germans wouldn’t let Israelis in to release the hostages that were handcuffed to a sitting helicopter, until the palestinians blew them up with grenades.

Yes, in our shopping malls and sporting events. At the same time, don’t expect the media to publish either names or religious affiliations…unless they can be labeled white Christian extremest.

Imam Neville Chamberlain Cameron, PM of the UK, loudly proclaimed that this has nothing to do with Islam and is against the principles of Islam.

Another fine example of George Bush’s religion of peace.

Truth be told, he isn’t much brighter than Al
Gore, marginally better than Obama.

Geez!!! Most all of the folks here will not, repeat not, explore what you are conveying!!!

I will try to help them with a link and a quote:

“Only when Muslims admit that 9/11 and 7/7 were the work of Muslim terrorists can we move forward to the next juncture: which is recognising the hard truth that Islam does permit the use of violence. Muslims who deny this, preferring instead to mouth easy platitudes about how Islam is nothing but a religion of peace, make the job easier for the radicals who can point to passages in the Koran, set down in black and white, that instruct on the killing of unbelievers.”

I thought the NSA was keeping track of potential terrorism via every phone call, text and email made by a US citizen to the rest of the world? Or are there exemptions for certain kinds of people due to political correctness? I wouldn’t be surprised if we find out these guys were on a warning list that this government ignored like the Boston Bombers.

Again, it’s obvious that a “gun free” zone leaves people vulnerable to those with an intent to kill….only the law abiding get hurt.

And I do expect to see this kind of madness happening here in the near future. It seems almost common place now.

Frankly, I’m amazed that we do not have more mass killings in malls in the US. There have been a couple started, and quickly ended, but those were single shooters. A group… Well, some friends and I gamed that sort of attack, and it would be a problem for single CCW possessors to counter, or for anyone to survive if plotted out correctly.

I try to find the back doors to the stores at every mall I visit.