Losing is good for you

Losing is good for you

I had heard much of President Obama’s speech at the U.N. yesterday. I know what annoyed me most about it.

Then I saw the online section of today’s New York Times opinion section. I think they explained my discomfiture very well. 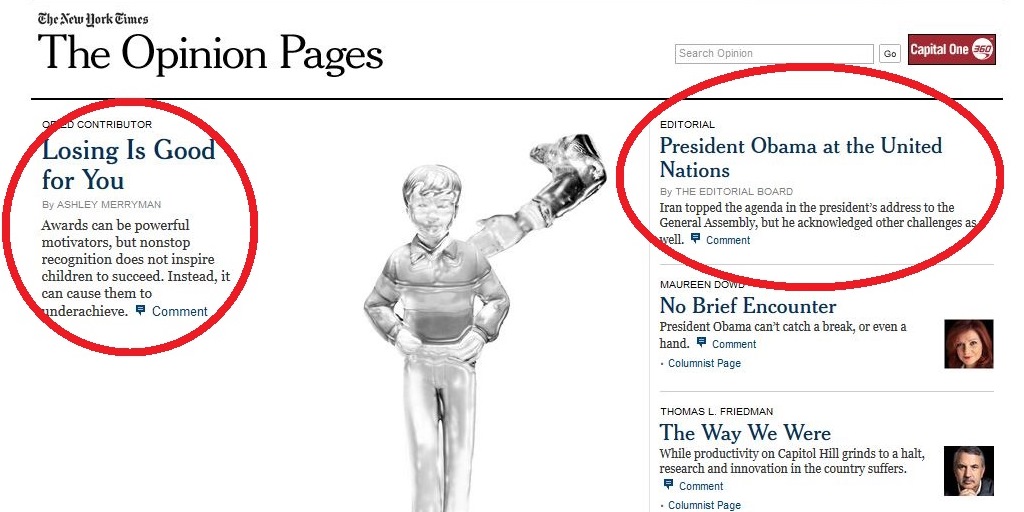 Together, we’ve also worked to end a decade of war. Five years ago, nearly 180,000 Americans were serving in harm’s way, and the war in Iraq was the dominant issue in our relationship with the rest of the world. Today, all of our troops have left Iraq. Next year, an international coalition will end its war in Afghanistan, having achieved its mission of dismantling the core of al Qaeda that attacked us on 9/11. …

We are committed to working this political track. And as we pursue a settlement, let’s remember this is not a zero-sum endeavor. We’re no longer in a Cold War. There’s no Great Game to be won, nor does America have any interest in Syria beyond the wellbeing of its people, the stability of its neighbors, the elimination of chemical weapons, and ensuring that it does not become a safe haven for terrorists. …

Now, to say that these are America’s core interests is not to say that they are our only interests. We deeply believe it is in our interests to see a Middle East and North Africa that is peaceful and prosperous, and will continue to promote democracy and human rights and open markets, because we believe these practices achieve peace and prosperity. But I also believe that we can rarely achieve these objectives through unilateral American action, particularly through military action.

The President praises himself for ending a war by bringing troops home and out of “harm’s way.”

In Syria he asserts that “there’s no Great Game to be won.”

He believes that military action is rarely the way to bring about peace and prosperity. However sometimes it is necessary. Would the United States exist as it does today if not for the Revolutionary War? Would people of his race have been free without the Civil War? Would Nazism have been vanquished without World War II?

Or put into contemporary terms. As was reported last week, Iran believes it can achieve its objectives by unilateral actions in Syria; specifically military actions. President Obama can either let Iran further its influence by doing nothing or he could take action to mobilize allies to oppose Iran and, if necessary, use force. It’s pretty clear from his speech that his opposition to Iran amounts to hoping that Iran will “realize” that Assad’s rule is a bad thing and that he’ll “insist” that Iran “government meet its responsibilities” regarding its nuclear ambitions. If Ayatollah Khamenei is quaking, it’s not in his boots but rather with laughter.

The theme of President Obama at the United Nations is that Losing Is Good for You.

Losing may good for us, from Obama’s perspective, but it’s never good for him…and his policies are geared to doing the greatest harm to the greatest number of Americans possible–and he’s fine with that.

“Five years ago”= When Bush was still President. Doesn’t he ever get tired of doing that?

That Obama mishandled things and made an ass of himself is beside the point. We further no legitimate or enunciated American interests by putting our boots down on this ground at this time on behalf of terrorists.

This is more Obama legacy speechifying.

That’s OK. I liked Sen Ted Cruz’s legacy speech yesterday much, much more. And Cruz has only just begun to fight.

No matter what he says, I strongly suspect that what the world will remember of the Obama era is his personal aerial assassination program, and that’s about it.

That’s assuming that Iran doesn’t manage to do something really spectacular – like finally manage to master WW2-era technology – during the remaining years of O’s reign. In that case, they’ll just remember O as another Chamberlainesque surrender-monkey who failed to avert obvious disaster. (Can we still say that, or is it now racist?)

Now, Professor, you know that Vladimir Putin was only echoing Barack Obama’s theme that the US is nothing special. Why should we bother to secure a win? We don’t deserve to win. Isn’t that what BO and Putin have in common?

I hope everyone here who is advocating that we attack a country or worse enter another war either enlist in the military or talk your sons, daughters, nieces, nephews and grandchildren into joining up. I would much rather see us taking other actions rather than fighting to resolve issues. Sure we had the revolutionary war…and the civil war and WW2…put those were all good causes. Iraq was a war of choice as was Viet Nam. Enough with the wars.

Every war is a war of ‘choice’, sparky.

Dilma, from Brazil, gave a speech that was a bigger hit.

You think it’s pleasant when Obama walks into his office? You think his staff preens around his desk?

Heck, when Bill Clinton was president, and people used to hear Hillary’s heels tapping on the marble floors; people used to go into hiding! They’d just open doors, and hide behind them. Whether you were having a meeting or not. Some, actually ran into the broom closet! Anything, just not to have to make eye contact!

“They love you, Mr. President!”

Americans are just used to bad leadership. And, we still have to keep lowering the bar on our standards.